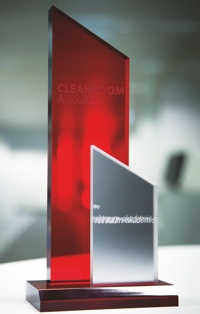 There is just over a fortnight to go until the deadline for receipt of entries to the Cleanroom Award, which will be judged during the third Cleanzone trade fair, taking place at Messe Frankfurt, Germany, on 21 and 22 October.

Since 2012, ReinraumAkademie (Leipzig) has been using the Cleanroom Award to showcase concepts and products that are notable for their outstanding innovation. The award honours pioneering advances in the field of cleanroom technology for their innovation, sustainability and efficiency. The five finalists will present their concepts in a special area and through presentations at the Cleanzone Plaza. The winner will be chosen by the trade fair public during the show and officially honoured on the second day of the event.

Previous winners have seen huge benefits to their businesses after being honoured. The Dutch company Technology of Sense, for example, won the Cleanroom Award in 2012 for its Apmon monitoring system.

‘We were convinced that our innovation would be of use to the industry, and that is why we entered the competition. The award, and the tremendous support from experts that came in its wake, were a huge help to our efforts to successfully launch Apmon on the market. Major brands like Samsung and BMW showed their interest straightaway,’ says Anneloes Elbers, Marketing Director for Technology of Sense.

The ground-breaking idea behind Apmon is that, rather than measuring the particles suspended in the air, as was previously the case, it is the particles deposited on surfaces that are measured. Apmon makes it possible to conduct automated particle measurement round the clock and continuously monitor contamination values in cleanrooms on screen.

The system is already in use, including at the European Space Agency (ESA) and in the automotive industry by Kostal Industrie Elektrik. The sales partner in Germany is PMT Partikel-Messtechnik, which is presenting Apmon at Cleanzone 2014.

The Portuguese firm Laborial won the Cleanroom Award last year with its Blautouch interactive workbench, designed for ultra-clean environments. This specially prepared workbench can also be used with gloves, and allows users to access any company and/or project data they require without having to set up additional computers or devices that might contaminate the purity of the cleanroom.

‘The Cleanroom Award was the second competition we entered in 2013, and we have been enjoying an outstanding response from experts worldwide ever since. They have realised that Blautouch sets new standards for the utilisation of IT in sensitive environments,’ says Tânia Fernandes, Marketing Director at Laborial. Blautouch will be represented at Cleanzone 2014 by Basan.

Applications for the Cleanroom Award should be submitted to Annett Michel at ReinraumAkademie (Leipzig), by the deadline of Friday 15 August. email: annett.michel@reinraum-akademie.de or T +49 341 98989 302

The primary reasons for visiting the Cleanzone trade fair are to see technological innovations and to take part in an open exchange on future developments with colleagues and experts from around the world.

Cleanzone is aimed at all sectors where production, assembly, packaging, or work is carried out under cleanroom conditions

The show will focus on the latest international innovations in the integration of IT in clean environments, automation, process optimisation, energy efficiency and bio-contamination monitoring.

But it is not only established companies that offer exciting innovations; users, universities and start-ups are also hotbeds for new concepts and new commercial products and technologies often arise from collaborations between academia and industry.

Professor Gerhard Winter, Professor of Applied Hygiene, Cleaning Technology, Chemistry, Materials and Sterile Technology at Albstadt-Sigmaringen University, explains: ‘Our university is the only one in Germany that offers a degree course in hygienic engineering, providing academic training for aspiring cleanroom experts – it is what sets us apart. We work very closely with industry, and for their theses, students have to design solutions to queries from companies that are usually related to classification and validation. Most of these new developments will be implemented by the companies, providing our students with excellent opportunities for their future employment.’

Cleanzone is aimed at all sectors where production, assembly, packaging, or work is carried out under cleanroom conditions. The trade fair presents the entire range of what is on offer, from the planning, construction and operation of cleanrooms to consumables and training. The congress taking place at the same time tackles current topics in the cleanroom industry, offering opportunities for interdisciplinary and international exchange at a professional level.

Cleanzone is for international visitors from all areas of application for life sciences and micro-technology. In 2013 more than 800 participants from 44 countries were brought together with 50 exhibitors, in addition to a host of prominent international experts at the trade fair and congress.