B.Braun Medical: The journey to a compounding aseptic production unit

Paul Bradley reviews the 24-month design, build and validation process that led the company to expand its Sheffield facility with two new Grade B production rooms increasing capacity by 70% 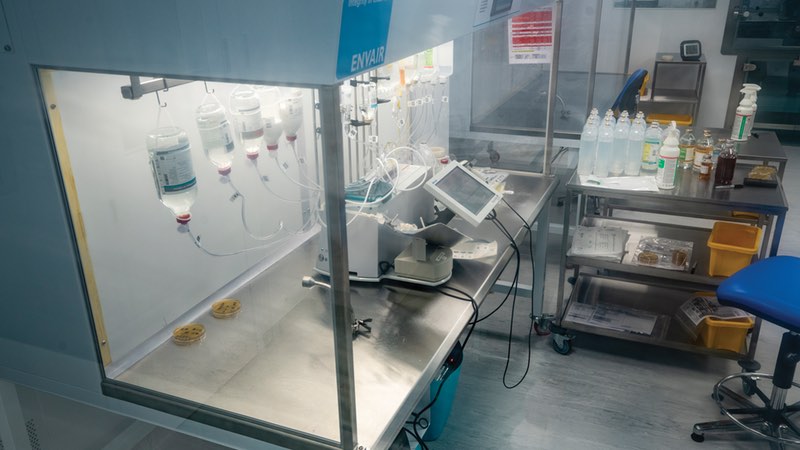 When predictions forecasted that a Compounding Aseptic Production (CAPS) facility in Sheffield would reach production capacity by late 2018, B.Braun Medical undertook a major expansion project. The initial facility had been operational since 2010, and it took expert considerations to make the capacity increase as efficient as possible.

Headquartered in Sheffield, South Yorkshire in the UK, B.Braun Medical specialises in aseptic, patient-specific parenteral nutrition products. The company also manufactures a range of other items, and all its portfolio is under an MHRA Manufacturing Specials licence. The expansion to the existing cleanroom suite was essential to meet the growing demands for parenteral nutrition.

Initial considerations for the expansion project included a new geographically separate facility, but the opportunity to use a 500 sqm patch of land adjacent to the existing site over car parking areas presented and the company moved forward with that option.

Eight years of operation enabled B.Braun to identify opportunities to improve the efficiency and quality of the new facility

The decision proved to be the better option as it had several operational as well as financial benefits. The major advantage being the speed of utilisation of the new capacity with the ability to concurrently recruit and train an expanded team of specialists during the build process. This team could then transition easily to the expansion on completion. Plus, expertise onsite in Sheffield could be called upon daily, negating the requirement to have a separate offsite project and management team.

The original production facility built in 2009 comprised of three independent Grade B cleanrooms of varying sizes, hosting a total of 11 Grade A Horizontal Laminar Flow (HLAF) booths. The Grade B production rooms were within an outer Grade D area with supporting areas including goods in-store, goods out and dispatch area as well as a quality control suite, offices and staff welfare facilities. Counting these areas, the total facility had a footprint of 1,050 sqm.

After eight years of continuous operation, the Production and Quality team at B.Braun were able to use training in lean production principles to identify opportunities to improve the efficiency and quality of the new facility design. The healthcare company opted to maintain and improve upon their existing disinfection methodology for the transfer of materials into the suite employing a compliant manual three-stage process of sporicidal and alcohol wipe and spray disinfection steps.

The conceptual design supported this by almost entirely removing the movement of materials between part 1 and part 2 disinfection stages and operator manual handling.

An operational User Requirement Specification (URS) and proposed cleanroom design were provided to several UK companies at a tender stage in 2017. The bid from Bassaire Cleanrooms was chosen to deliver the initial design concept. 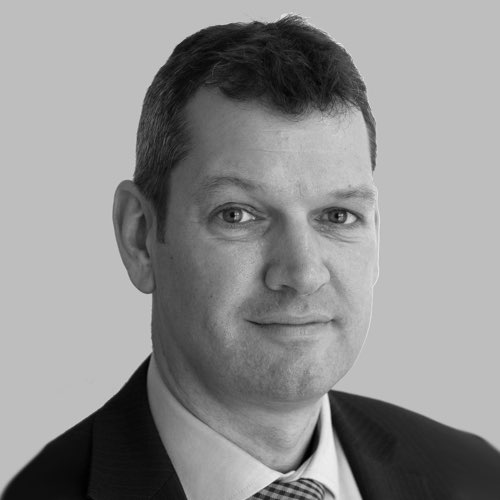 The build itself would not come without inherent operational challenges. Aseptic production within an active construction site would understandably cause nervousness amongst even the most steadfast of Quality Managers.

Staff moving out of the existing build would be entering a construction site and would be required to adhere to the contractors' Health and Safety regulations, including wearing standard hard hat, hi-vis jackets and boots.

A single road in and out of the site required daily communication with site supervisors to manage heavy plant traffic to the site as well as continued deliveries and dispatch of products to and from the existing facility.

Additional measures and vigilance resulted in historical lows of recorded microbiological excursions. This is a testament to the detailed planning and risk assessment before commencement.

A final detailed URS was co-developed between Bassaire and B.Braun with detailed designs and piping and instrumentation diagram (P&ID) provided by the end of 2017. In February 2018, both companies met with the MHRA who provided commentary on regulatory expectations and further considerations to the design.

On the civil engineering front, the project commenced with a new three-floor extension adjoining the existing facility in November of 2017. The contract for the civil phase of the project was awarded to Triton Construction. Cooperating closely with Bassaire and B.Braun, the three parties' work enabled cleanroom construction to commence on the ground floor by April 2018.

In discussion with B.Braun, it was decided to use the Kingspan UltraTech Precision panels—a fully flush modular system for specialist cleanroom applications—in the Grade B areas, and Kingspan Versatile panels elsewhere. The Precision panels allowed for HVAC exhaust and utility ducting to be embedded within the walls panels with flush windows, doors, PBSC transfer hatches and electrical sockets. They also allowed for the vinyl floor to be coved to the wall without visible seams.

Bassaire and Envair performed Installation and Operational Qualification (IOQ) of the cleanroom suite and HLAF cabinets, respectively, using B.Braun approved documents under the company supervision. A separate Factory Acceptance Test (FAT) of the HLAF was performed at Envair on a single HLAF before shipment and IOQ.

Performance Qualification (PQ) of the cleanroom suite, cold rooms and HLAF was performed by B.Braun, including three process simulation media fills. As part of the PQ, Validair performed a full cleanroom qualification including pressure differentials, room air change rates, HEPA filter integrity tests and smoke visualisation test. These were needed to demonstrate that no critical quality parameters had changed between completion of Bassaires' work in November 2018 to completion of media fills in February 2019.

Continuity of supply in a patient-specific aseptic production facility is critical for products that can be ordered, produced from scratch, inspected and released for dispatch in a matter of hours. So, a key aspect of the design consideration was building in operational resilience.

A novel approach to the design was to utilise an existing waste lobby and cleaners cupboards and convert them into airlocks between two cleanroom suites. Both Grade D areas were designed to be over pressured relative to the two new airlocks by a minimum of 15 Pa. Maintaining the airlocks at Grade D enables staff to walk and transfer materials between both cleanroom suites as if one consolidated cleanroom suite.

As a contingency, each cleanroom suite can be operated independently from the other by closure of the airlock in a matter of minutes. Each suite also has separate materials and personnel entry, cold rooms and waste out. Pressure differential checks and smoke visualisation were performed during qualification to demonstrate the effectiveness of these airlocks. The same airlock design principle was used during the build process to maintain segregation of the existing and new suites. 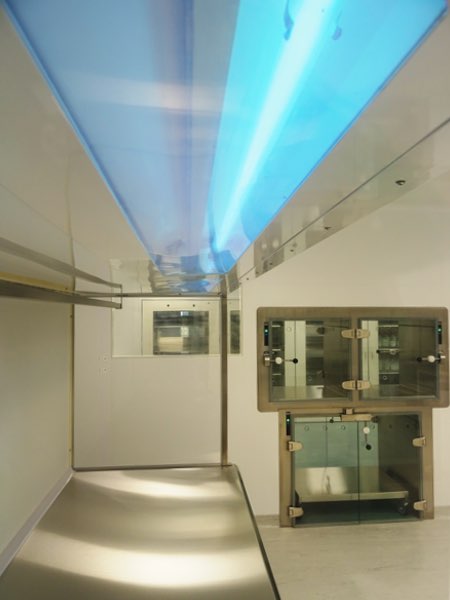 A specific design criterion was the ability to remove the newly supplied Envair 2-metre-length HLAF cabinets from the Grade B area to an unclassified hygienically clean area to enable maintenance, filter changes and testing to be performed without hindering the operation of the Grade B cleanroom.

The two new Grade B production rooms are separated by a shared Grade B "lobby" area. This area has been designed to accommodate a full HLAF cabinet that can be moved to a Grade D corridor by opening oversized doors in the wall of the lobby. Under normal circumstances, the oversized doors act as a fire escape route for Grade B production staff with sirens notifying inadvertent opening.

In the Grade D corridor, the cabinet can be further moved to an outer material airlock enabling repairs and filter integrity testing to be performed without the risk of cross-contamination of the Grade B cleanroom. The cabinet can then be returned to the production Grade B room with sequential disinfection steps from Grade D to Grade B lobby and room. The cabinet can be removed in a matter of minutes enabling production in the remaining cabinets to continue after a standard end of session clean down.

The cleanroom HVAC fan supply system incorporates six EC supply fans, unlike the existing suites' single supply fan and fan belts. The new fans operate with redundancy built-in so that in the event of a single failure, five fans can maintain the required volume of airflow. Any failed EC fan can be swapped out with minimal disruption to production.

As a nod to the past, a bank of magnehelic gauges were mounted in the entry to the cleanroom suite with HVAC supply indicator lights. Although both suites are fitted with the most up to date Validair Monitoring FMS system with a back-up mirror system and server, the gauges provide a simple, low-tech method of monitoring and recording pressure differentials. True to the design principles, the gauges can be maintained and calibrated from the unclassified support areas. The entire facility is supported by a diesel generator and uninterrupted power supply, providing 100% of electrical requirements in the event of a site mains failure.

Several innovative solutions were developed and incorporated in the suite. For example, chilling aseptically made products as soon as possible is recommended. Typically, movement of finished products to the final cold room would be via an airlock at ambient temperature. This introduces a delay and additional manual handling. Working with Bassaire, the B.Braun suite incorporates a Grade D classified double-door entry airlock cold room. This allows the finished product to be placed into the cold room directly after inspection.

Several other challenges were overcome in the design, including the use of PTFE HEPA filters that could withstand the air temperatures and humidity levels, and an air recirculation system that would allow pressurisation of the sealed cold room relative to the outer unclassified area.

Custom-built HLAF cabinets were supplied by Envair, and working closely with B.Braun, cabinets were designed specifically for the compounding process. Additional depth and length of the internal work surface allowed specialist filling equipment to be accommodated.

The requirement to continuously monitor non-viable particles was overcome by designing a system that could sample particles immediately below the highest risk filling point without the interference of the process. Fragile cabinet HEPA filters are protected with Pure Laminar Flow (PLF) screens, and HEPA filter replacement can be achieved in a fraction of the time by having filters changeable from the reverse of the cabinet.

Using technology developed in conjunction with B.Braun, UVC germicidal technology was also incorporated into the cabinets to complement the standard manual disinfection. The UVC lights automatically illuminate when the cleanroom is not in operation, providing an additional log4 reduction (EN13697) in 60 minutes of viable organisms with zero cleaning residues.

Working carefully with innovative design solutions, the construction partners delivered an expanded facility that will allow B.Braun to continue to grow, providing aseptic products across the UK.