Engineering proper HVAC systems for critical environments often involves distinct areas of room pressure control and directional airflow. An anteroom between a primary room and corridor ensures a safe airflow buffer zone between the controlled pressurized space and an unclean area. The two spaces are separated by a completely walled area with a door. However, in some applications an ante area without walls or a door can achieve the same effect.

What is an ante area?

An ante area is a buffer zone of laminar or displacement airflow near a clean work area, such as a pharmaceutical compounding space. There is no physical separation between a gowning or wash area and the compounding area. Instead, proper placement of supply and exhaust airflow devices provides sufficient air velocity to sweep particles away from the compounding area and maintain unidirectional airflow during operations. Another technique is to employ the principles of displacement airflow to ensure particles move from the ISO Class 7 area toward the ISO Class 8 area. These ISO classes are the guidelines for permissible particle counts under US Pharmacopeia 797. 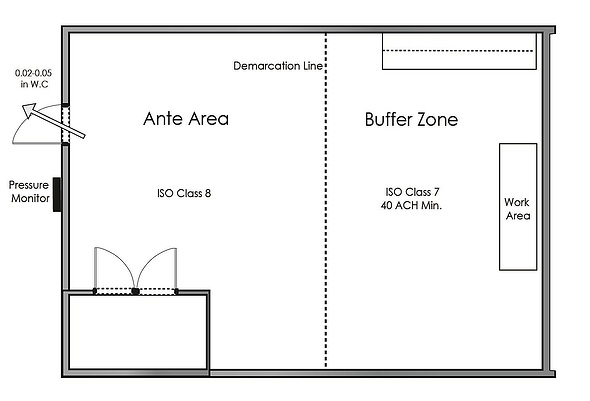 Even when an ante area is used, the primary room through the demarcation line and buffer zone must be pressurized. Air pattern analysis via smoke studies should be conducted at these critical areas to demonstrate unidirectional airflow and sweeping action over and away from the clean work area.

The most efficient way to measure, monitor, and alarm on room pressure conditions is using a monitor that can support two rooms, like the Setra's SRCM and Setra's SRPM.