The winner of the cleanroom innovation award voted on by exhibitors and visitors to Cleanzone 2016 was the Adriatic Institute of Technology for its mobile facility Shellbe.

The facility designed by the recently founded Adriatic Institute of Technology, is a mobile facility consisting of transportable modules that can be deployed as an infirmary or infectious disease ward in areas with poor infrastructure.

Its plastic construction is extremely resistant to heat and cold enabling it to be deployed in extreme environments.

Professor Gernod Dittel, Dittel Engineering, who was involved in the design of the module (with Matteo Filippi (Dipl. Ing.), said Shellbe is not a container, not a bungalow, nor a prefabricated element. It is an advance mobile facility system made from fibre reinforced plastic (FBR) that can be taken by truck or trailer to anywhere in the field without the need for special equipment such as cranes of forklifts.

Installations of varying sizes can be built with the modular construction using preassembled media, supply and disposal lines. 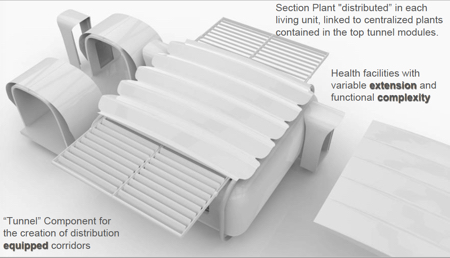 View of Shelbe showing the extension arrangment from above

Every cell can be independently served for water and energy supplies and for waste materials management but could also be linked to general central plants, if bigger installations are needed.

Other nominees shortlisted for the award, sponsored by ReinraumAkademie, included:

A full write up on all the innovations will follow in a future edition of Cleanroom Technology.

Cleanzone celebrated its 5th birthday in Frankfurt with some 86 companies and institutes from Germany and abroad that exhibited at the international trade fair and congress for cleanroom technology.

Ruth Lorenz, Vice President Technology & Production at Messe Frankfurt, is pleased by the trade fair's development: 'Cleanzone has performed tremendously since its launch in 2012. It satisfies the demand for an international platform for exchange for cleanroom technology.'

Of the 86 exhibitors, 26% came from outside Germany. This year marks the first time that companies exhibited from the Czech Republic, Israel, Korea and Turkey.

Among some important industry associations that exhibited at Cleanzone were: the Verein Interessengemeinschaft Pharmabau 3000 (VIP3000), a group promoting the interests of those involved in pharmaceutical construction, Cleanroom.de, a group of firms providing solutions for the field of micro-technology, and Cleaning Excellence Center Leonberg, specialists in the field of technical cleanliness.

Next year's show is being planned and will take place in earlier in the year, in October, the organiser said.