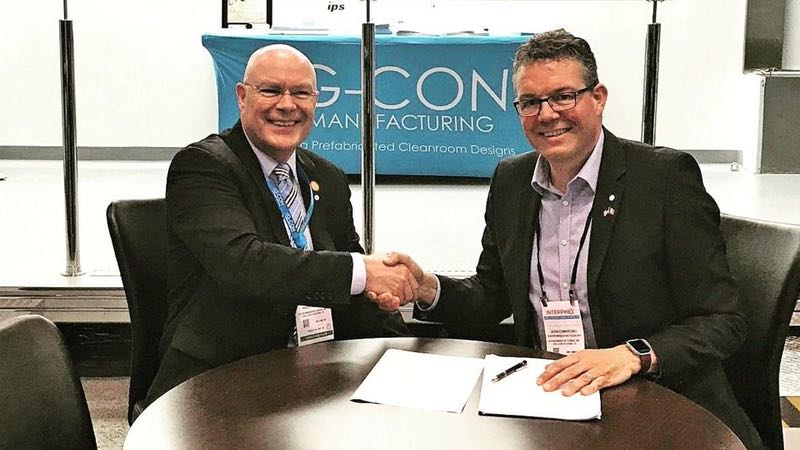 Asgard Cleanroom Solutions and G-CON Manufacturing have announced that the companies have signed a manufacturing and supply agreement at Interphex 2018. By the agreement, Asgard will manufacture PODs pursuant to G-CON’s quality system for G-CON’s European customers.

The two companies have worked together since 2016 when Asgard became a sales representative to G-CON in the European market. Since then, G-CON and Asgard have worked on many projects together and have continued to build the relationship.

With expanding interest in G-CON’s PODs in Europe and Asgard’s modular cleanroom building experience, the companies have decided to further their relationship to include Asgard’s manufacturing the POD systems for G-CON customers.

“We are very excited to further our relationship with such an industry leader in Europe like Asgard. Our teams have worked together over the last several months not only with great efficiencies, but also with a common goal and great partnership,” said Maik Jornitz, CEO of G-CON.

Jornitz said G-CON has seen demand for PODs increase drastically in Europe and having a manufacturing platform in Europe not only is more efficient, but also enables its European customers to be closer to the design and production cycle.

“We firmly believe this new manufacturing location will be better service to our European customer base with our manufacturing sales and project engineering in Europe. We have received the feedback from our customers and we are acting on it,” Jornitz added.

Commenting on the agreement, John Comerford, CEO of Asgard Cleanroom Solutions, said: “Our clients across Europe are demanding a change in construction methods to reduce on-site construction hours, and to enable them to accelerate their time to market for their products. Our exciting collaboration with G-CON will allow this to happen.”