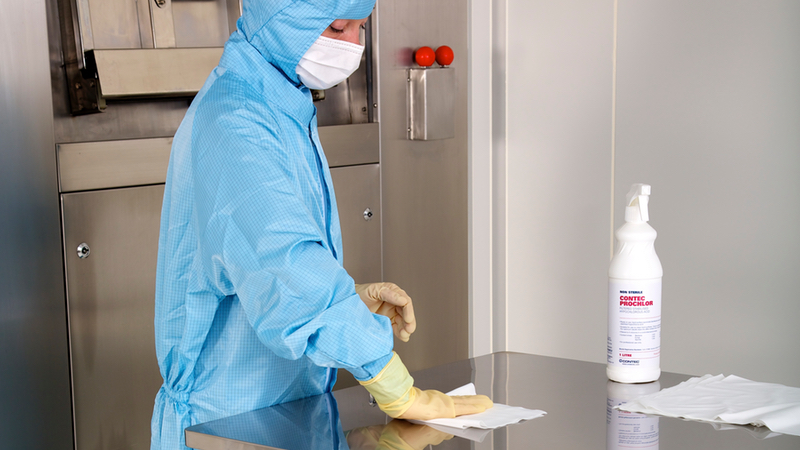 The EU Annex 1, which specifies guidance for the manufacture of sterile medicinal products, is currently in the process of being rewritten. With no update of the document having been carried out for over a decade, a complete review and rewrite was needed.

The current 16-page document will be replaced with a potential 50-page document. Each topic has been significantly expanded, new topics have been included, and the concept of risk management is embedded throughout the document.

As well as concerns that a residue may inhibit the efficacy of the disinfectant or support microbial growth, residues can also cause a safety problem, slippery floors, or transfer to product contact surfaces. There could also be functional issues created, as well as aesthetic issues of the facility not looking "clean".

Figure 1: The build-up of residue of different cleanroom disinfectant on a surface. Mirrors were used to show residues more easily

Cleanroom residues can be generated by the process, raw materials, and certainly by people. A significant contributor to the residues residing in a cleanroom, however, is actually the disinfectants themselves.

Many common and well-used disinfectants leave significant residues on a surface, which can subsequently have a detrimental effect on the effectiveness of the disinfectant. This is acknowledged in draft Annex 1, by stating "cleaning programs should be effective in the removal of disinfectant residues".

There are currently no approved or validated methods for assessing the amount of residue on non-product contact surfaces. Many or even most facilities will conduct a visual test for residues on non-product contact surfaces only. As previously mentioned, many of the commonly used disinfectants in cleanrooms can themselves leave significant residues on a surface. This can manifest as "sticky" surfaces, smeared windows, and yellowed equipment; potentially leading to corrosion and damage.

There is no definition or standard of what constitutes a "no" or "low residue" disinfectant. However, there are claims made on disinfectant advertising that a disinfectant is either "no" residue or "low" residue. The data to support this is usually a simple residue on evaporation test.

The European Pharmacopoeia (EP) has a residue on evaporation test that can easily and cheaply be used to quantify the amount of non-volatile residue left by a solution. The test method simply requires 100 ml of the solution to be boiled to dryness in an evaporating basin of known weight.

The EP residue on evaporation test is a two-step method:

Two chemicals used as disinfectants that do have an EP monograph are isopropyl alcohol and ethanol, and these have limits for residue on evaporation.

Both products would be universally accepted as leaving no residue on a cleanroom surface. So, a product that leaves a non-volatile residue of less than 25 ppm could be classed as no residue?

The only other commonly used cleanroom disinfectant that leaves a residue as low as alcohol is hydrogen peroxide (H2O2). The compound breaks down to water and oxygen on a surface, and the reaction taking place is expressed as 2H2O2' 2H2O+O2.

Test work carried out on Contec's hydrogen peroxide confirms this with ROE results between 4 ppm and 7 ppm. However, this cannot be assumed for all H2O2 solutions. It is a solution in equilibrium, so different grades of hydrogen peroxide contain different amounts of stabilisers, which can contribute to the amount of residue left behind. 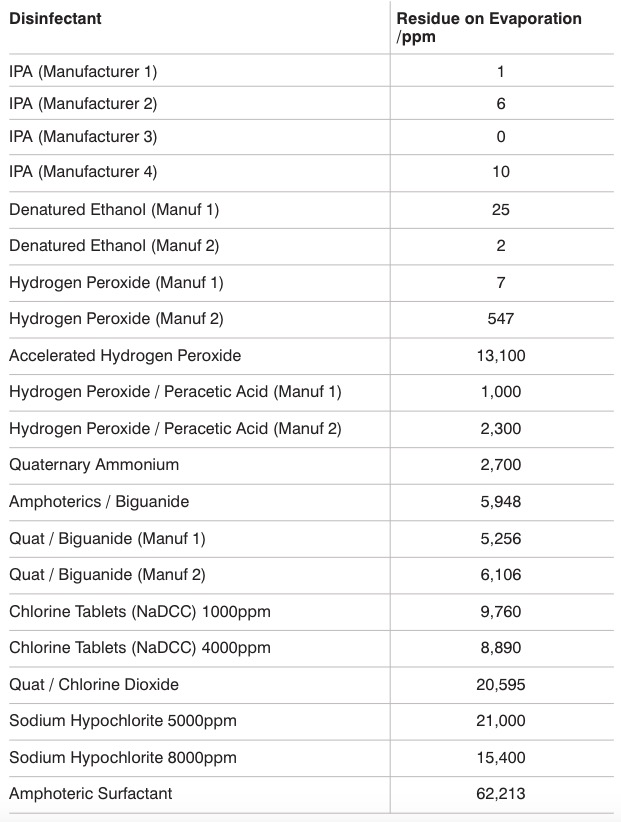 Blended disinfectants that contain alcohol or hydrogen peroxide with other chemicals can also leave considerable residues. Table 1 shows the residue on evaporation levels for a range of cleanroom disinfectants manufactured in both the US and Europe.

As can be seen from the results, the level of residue for the different active ingredients can vary significantly from products leaving approximately 7 ppm up to products leaving 62,000 ppm.

The table also shows, there can be a difference for disinfectants containing the same active ingredient, which would be due to the concentration of the active ingredient in the product, the amount of stabilisers required, and potentially the addition of preservatives, pH adjusters or odour mitigators.

Disinfectant residues can take many forms: clear, white, yellow, pink, solid, gelatinous, crystalline, powdery, or sticky. The visual appearance of the disinfectant on a surface may not always match the amount of residue shown on a residue on evaporation test. The method of application of the disinfectant will also affect the residue.

Figure 1 and Table 2 show the build-up of residue of different cleanroom disinfectant on a surface. Highly polished mirrors were used as reflective surfaces show residues more easily (see Figure 2). Two mL of a common biocide was added to a mirror each day. The product was added to the centre of a silicone ring (50 mm internal diameter) for a total of 14 days. The liquid was left to dry without wiping.

Liquid was added via a measuring syringe. The photos of the residue can be seen in column A of Figure 1. The results were graded on a visual scale of 0-10 with 0 being no residue or marks left, and 10 being large, thick, highly visible residue left. This process was chosen as we wanted to create worst-case residues where a disinfectant had been left to pool for example.

The disinfectant was also applied for 12 days using a wiping method. One polyester/cellulose dry wipe was used per mirror. The wipe was folded into quarters and then the product was sprayed onto one side five times (roughly 5 ml of each product added per wipe) at a distance of 10 cm each time. The product was applied, via a single wipe, down the centre of each mirror, twice daily for 12 days: a total of 24 wipes per mirror.

This process more closely reflects how a product would be applied routinely in the cleanroom. The residues left for the different disinfectants can be seen in the set of photos underneath column B, with the visual ranking in Table 2. 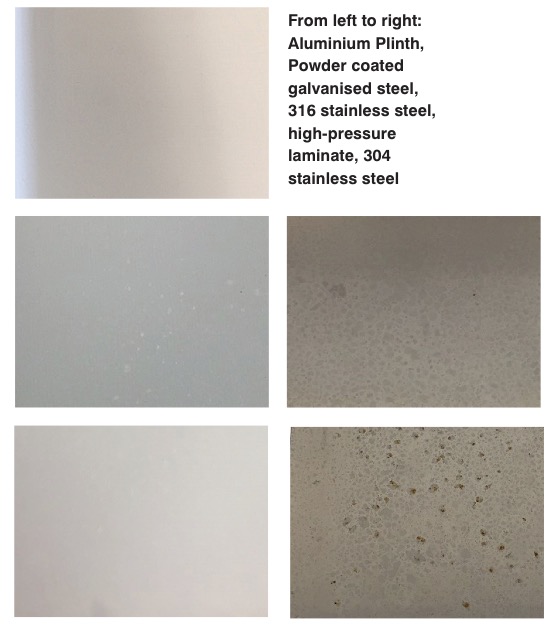 All the sample surfaces were cleaned by spraying with Contec Denatured Ethanol, and wiped down with a dry polyester wipe. The samples were tested in triplicate.

Every working day for four weeks, the sample surface was sprayed three times from a distance of about 30 cm with Contec ProChlor. The disinfectant was left to dry and allowed to build-up on the surface.

The residue left from Contec ProChlor, a hypochlorous acid product, is a calcium salt, which appears as a white powdery residue. The residue on evaporation for Contec ProChlor is between 1000-1500 ppm. The photos in Figure 2 show this amount of residue can look very different on the different surfaces, dependant on its colour, smoothness and reflectiveness.

Highly reflective surfaces, such as glass and polished metals, will show the residue more significantly, although the amount of residue there will be the same. This means a purely visual check of a residue may not be sufficient.

A glance at the windows in a cleanroom will very often quickly reveal if there is a problem with residues on other surfaces as well, as most residues can be clearly seen on glass.

Not all residues are created the same

Table 1 shows many common disinfectants leave a residue to greater or lesser degrees. Draft Annex 1 states that the cleaning process should be validated, so that it can be demonstrated that it can remove any residue that could create a barrier between the sterilising agent and the equipment surface. The validation should also prove that residues that could contaminate the product, with either chemical or particulate contamination, are removed.

Consideration should be given not just to the amount of residue left but how easily the disinfectant residue is to remove from the cleanroom surfaces. Old and scratched surfaces may also influence residue removal.

Some residues are free-rinsing and easy to remove, others are "sticky" and waxy, and can be difficult to remove from a surface. This can also change over time. A residue easily removed immediately after the contact time might not be so easily removed weeks later. If an immediate rinse stage is not to be used, work would need to be carried out to show how long a residue can be left before removal becomes more difficult.

Disinfectant residues can take many forms, from gelatinous to powdery

Contec addressed these issues for a cleanroom disinfectant used in the company's own cleanrooms. A cleaning phase was carried out at each stage of the residue build-up work. When the disinfectant was sprayed onto the surface for four weeks, the salt residue was visible from week two.

Previous studies had shown that the residue could easily be removed immediately after use with both water and IPA. We wanted to validate that we could use the product without a residue removal stage for a month, so work was carried out at intervals to see if the residue remained free-rinsing.

At four weeks, the salt became insoluble and significantly more difficult to remove. This meant the recommended use for this disinfectant was either remove immediately after contact time by wiping-to-dry, remove with water or IPA, or with a residue removal stage at three weekly intervals.

These studies start to give an insight into how much validation work may be required to meet the requirements of the new draft Annex 1 if a "no-residue" disinfectant is not being used to disinfect the surface.

A lab-based residue on evaporation test will give a quantitative result of how much residue left behind, and if it is above 25 ppm per 100 ml, further validation work would be required.

The method of application of the disinfectant will need to be taken into account, as this affects the amount of residue left on a surface in use. This could be seen by our qualitative study; further work needs to be carried out to find an easy-to-use, robust method of quantifying a residue on a surface in normal use.

Such a study could be done by conductivity measurements, UV contrast chemicals and computer imaging, the addition of luminescent bacteria, and luminometer.

If we can quantify the amount of residue on a surface, then a pass criterion for residual removal can be stipulated; not just that a surface looks visually clean

The roughness of a surface will also influence how easily a residue can be removed. The choice of cleaning solution will need to be validated based on whether WFI, alcohol or a detergent (surfactant) solution works best. This might not be the same for all disinfectants that you are using.

If we can quantify the amount of residue on a surface, then a pass criterion for residual removal can be stipulated; not just that a surface looks visually clean.

Consideration would need to be given to the pass criteria. Is the residue removal only successful if the levels remaining on the surface are below 25 ppm? Or can a higher limit be justified? At what residue level does there start to be some detrimental effect on the disinfectants used or risk of carrying over onto product contact surfaces?

There is certainly more work to do on understanding, quantifying and removal of disinfectant residues. Watch this space for further updates.


N.B. This article is featured in the December 2019 issue of Cleanroom Technology. Subscribe today and get your print copy!