The modular building system BCPS bears the seal of approval for GMP, EHEDG and ISO 14644-1 facilities 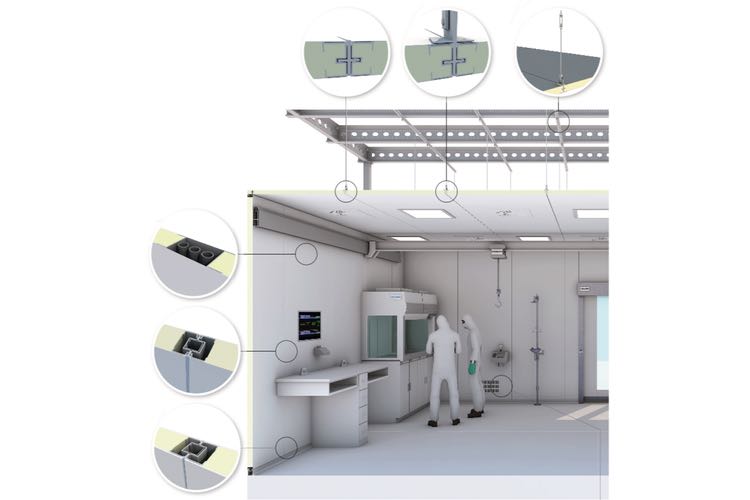 Granted by Germany’s Fraunhofer Institute for Manufacturing Engineering and Automation, the IPA Fraunhofer Tested Device is a certification mark for products that have been objectively qualified in accordance with recognised standards and guidelines regarding their cleanroom compatibility.

The BCPS is a completely prefab wall and ceiling system, including windows and doors. Brecon claims the system makes the assembly of cleanrooms considerably more efficient and affordable. Thanks to the pre-made building elements, doors and windows, the building process is not only faster but also much cleaner.

"Cleanliness and assembly are optimised during the construction process because all the panels are prefab and the walls and ceiling are installed in the same fashion as a LEGO box. Everything is prepared, including cut-outs," Geerd Jansen, General Manager Brecon International, explained.

Thanks to this pre-production process, the installation is faster and with fewer contamination risks as there is no need fort drilling, cutting or grinding.

Commenting on the savings, Jansen added: "The installed HPL panels are approximately 10% to 15% more cost-effective than the steel frame with classic gypsum-board and high-pressure laminate or HPL coverings. In steel, the panels are a bit more expensive as sandwich panels, but clearly, you can balance the cost increase by a faster assembly process."

In addition to the savings in costs and time, BCPS steel panels are GMP A-D approved and installed complete flush.

The Fraunhofer Institute in Germany is the largest organisation for applied research in Europe. Its IPA business unit has tested the BCPS building system according to the GMP Annex 1, EHEDG and ISO 14644-1 standards and guidelines. Today, the BCPS is the only cleanroom building system supplied in the Netherlands that is IPA tested and included in the data file tested-device.com.

The final assessment has led to a classification of the Brecon system according to ISO 14644-1 class 3 and GMP starting from the highest class A and lower. This means that the building system can be implemented up to the highest level in the pharmaceutical, medical device, food and cosmetic industries and the semiconductor sector.

Typically, conventional building techniques use a frame construction onto which plasterboard is usually attached as a foundation for PHL adhesion. The modular BCPS cleanroom system, however, follows a different approach: the prefab panels of this system are made prefab in the factory, and they can be supplied in HPL as well in Steel. Both final finishes are certified.

At the building site, the panels are assembled according to the click-and- fixed principle and then the cleanroom is further assembled.

This offers many advantages: there are far fewer work activities on site and the throughput times of the project are much shorter. With renovations, the shutdown period is reduced considerably. The modular panels are also ideally suited for re-use.

The new Brecon system is the result of extensive research into materials. We were also faced with the challenge of developing the right profiles and constructive composition of the doors, windows and ultimately the entire building system, the assessment of the correct parts and the search for innovative solutions concerning air transport plus a list of hundreds of topics.

The BCPS cleanroom system has already been installed at companies in the Netherlands. Projects include the compounding pharmacy of the new Princess Maxima Centre in Utrecht, the MSD Pharmacist in Boxmeer, foods producer Nutricia in Zoetermeer and at MJN (Mead Johnson Nutrition) in Nijmegen.