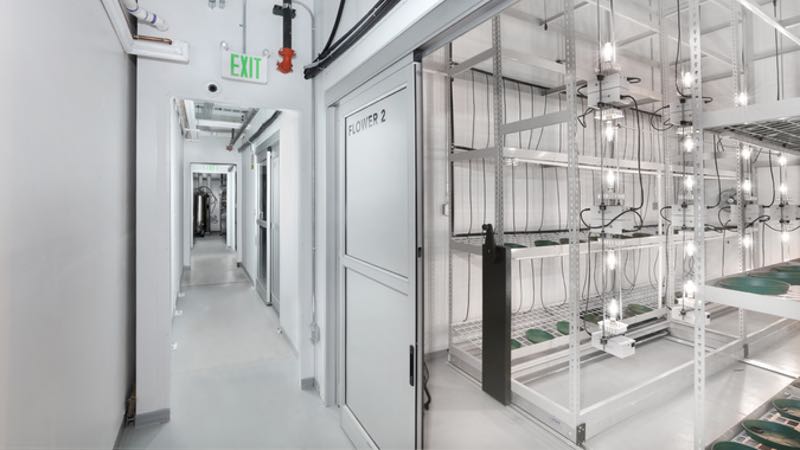 Cannabis cultivation and processing is hands-on, and quite literally, dirty. Soil-grown plants in synthetic habitats provide a tropical incubator for opportunistic pathogens, spores, insects, and microbes. But before digging into the topic, let's define and contrast the health risks of cannabis-borne contamination to understand why ‘grow rooms' adopting cleanroom technology can render cleaner, safer products.

The team gathered 20 samples of medical marijuana from across California and sampled for dangerous bacteria and fungi with DNA analysis. Nearly every sample contained the same pathogens commonly observed in medicinal cannabis patients, particularly those undergoing cancer therapies.

Studies indicate marijuana harvests yield significant amounts of Aspergillus spores, a leading cause of lung infections in the sick and immunocompromised.

Aspergillus is known to cause chronic pulmonary Aspergillosis (CPA) and Aspergilloma, which produce cavities, fungal clumps, and irreparable scarring within lung tissues.

Acute Invasive Aspergillosis is the fungal species associated with the deaths of two chemotherapy patients, two leukaemia patients, a renal transplant recipient, and multiple patients with AIDS. Once considered a weak pathogen, Aspergillus exposure during modern immunosuppressive therapy increases the likeliness of deadly infections with few treatment options. Common moulds and pathogens also include Mucor and Pseudomonas which thrive on plant surfaces in soil-rich areas.

In the United States, the lack of federal regulation means product testing is limited to state governed laboratories. But, most states have adopted protocols for microbial and pesticide testing.

A batch that fails microbiological or pesticide testing must be destroyed without a sale. Thus, some cannabis growers opt for systemic or experimental pesticides and fungicides. Despite widespread bans of toxic pesticides, such as Eagle 20, these agents still appear in plant genetics years later. Some might conclude negligent, deceptive, or illegal chemical use among growers, but the issue is multifaceted. In 2018, a Sacramento laboratory was caught faking pesticide test results in connection to over 100 licenced California growers.

With a reported 2018 medical cannabis revenue of US$5.1 billion, industry-wide losses from bad batches may exceed $1bn in just California alone.

The ideal cleanroom for cannabis

Many cannabis facilities adopt an equivalent standard of air quality common in non-critical medical device packaging rooms. In these cases, an ISO Class 8 environment is common, which improves air quality over a standard office space by a factor of 10.

Operators wear low-particulate coveralls, bouffants, face masks, and shoe covers with shed-resistant fabrics. Special gowning procedures prevent human-borne burdens such as dead skin cells and hair. In a single hour, the entire volume of air in the room is removed, filtered, and replaced anywhere from 5-48 times. 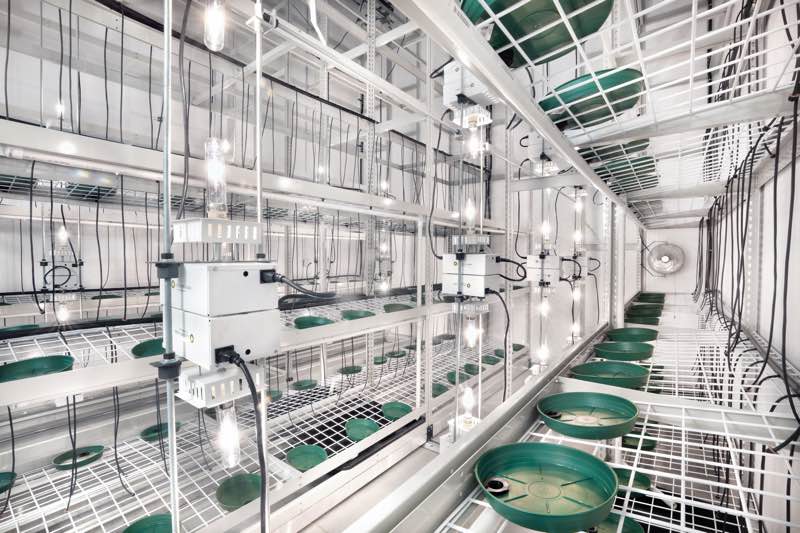 Live plants produce many more variables and potential contamination sources. Clean grow room builds must not only reduce contamination inputs via plants, soil, and people, but they must also support movement, unhindered workflow, and a high degree of structural customisation.

A modular fan filter system is a common recommendation for cannabis grows. A ceiling-mounted fan filter unit (FFU) includes a motor and housing with easily replaceable filter media. Instead of routing and connecting new ducts to existing HVAC, ceiling mounted FFUs utilise an interstitial space in the ceiling; this is called a plenum.

Fewer cuts, collars, and detours around existing HVAC systems improve efficiency and reduce filter load. Air is more easily routed and filtered for reintroduction into the central HVAC systems or vented externally. Because modular panels feature prefabricated mounting and assembly design, there's no cutting or sawing that may compromise corner fits and seams: each panel snaps together for an airtight seal with minimal assembly.

Complete assembly and disassembly are feasible in a matter of days with a small team, while traditionally framed builds often require a half-dozen contractors with weeks of ongoing construction. 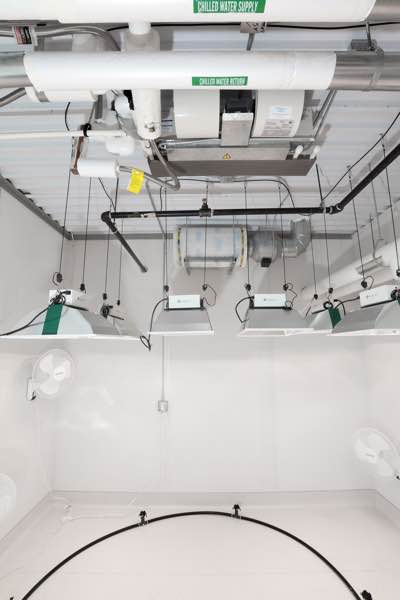 Mould and fungus are a primary concern for humid and moisture-rich environments. Many grow rooms are externally vented with a significant amount of air passing through, therefore the air pressure differential may be neutral, if not slightly negative.

A negative pressure differential introduces air from the immediate area via entrances, cracks, and gaps. Mould spores, which are capable of remaining buoyant for long periods of time, easily migrate on warm air streams during entry and exit of personnel. Without a remedy, a grow room is only as clean as its closest adjacent room.

With this in mind, a positive pressure environment is the most effective for a cannabis grow room. Higher pressure in the grow room ensures that air is not sucked in from dirty adjacent spaces. Because of the tight seal, the room also supports outstanding heat retention and minimal energy use.

The R-value in cannabis grow room

Grow room designs must account for energy transferred as heat via conduction, convection, and radiation. Walls with little to no R-value will require more energy to reach and maintain the desired growing temperature. Grow rooms without tight seals between walls, ceilings, and entry points produce convection, which skews temperature, humidity, and vapour pressure levels: cleaned conditioned air floods out, and dirty, unconditioned air filters in.

Plants, soil, and people account for the majority of cannabis contamination sources. Transport carts, dollies, and tools must also be acknowledged as carriers. At 60 microns, a dust speck in a sliver of sunlight is visible unlike spores, allergens, and pathogens within a range of 1-10 micron. 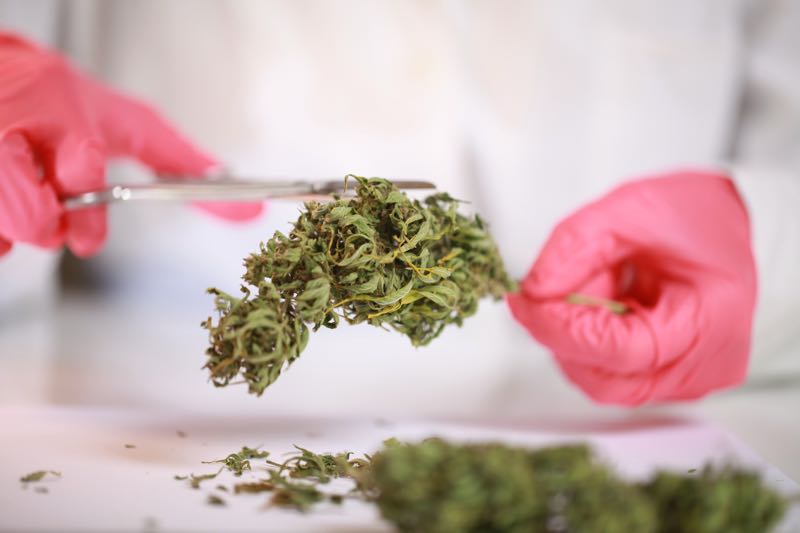 The mat captures 99% of particles as small as 0.5 microns in just three steps or three full rotations of a wheel. Polymeric tack-regenerating materials allow easier cleaning and prevent further contamination sprawl. Unlike traditional “peel-off” designs that require hand removal of plastic strips, a quick mop and squeegee to restore tackiness without plastic waste.

Garment donning is another element to factor in­­­. Gowns and masks prevent the shed of skins cells and hair while shoe covers reduce foot-borne pests, spores, and grit. Automated garment dispensers are a popular option for faster, cleaner donning of protective apparel. An automatic shoe cover machine applies and removes shoe covers hands-free, thus avoiding a hop-and-balance act or contact with the dirty floors.

Air showers also play a part. An air shower is a double-door air chamber that prevents dirty air from entering the grow room during entry and exit of the staff. Air showers scrub garments, tools, and carts with high-pressure HEPA filtered air as a final decontamination barrier.

History has shown that ill-advised manufacturing controls lead to unknown risk, late-stage market failure, and crippling penalties. While not every cultivator requires a custom modular grow room, the smallest stride toward clean growing could make all the difference in saving a crop, or a life.

Not all HEPA filters created equal

A cleanroom grow with HEPA filtration removes fungal spores normally between 3 -100 μm in size, but sometimes even as small as 1 μm. True HEPA filters capture 99.99% of all microorganisms, spores, and particles 0.3 μm or larger for the entire life of the filter.

HEPA filtration is a concept often rebranded with dubious monikers such as “HEPA-based technology”, which avoids performance requirements, yet still fetch premium prices.

Cleanroom-rated HEPA filters must provide test and certification documents to validate performance standards. High-output HEPA fan blowers filter and replace each cubic unit of air up to 50 times each hour.