The UK cleanroom sector may see less activity from Big Pharma in future but aerospace, advanced manufacturing and medical device activity is growing in its place. Susan Birks reports on future potential in the UK market

The UK cleanroom sector may see less activity from Big Pharma in future but aerospace, advanced manufacturing and medical device activity is growing in its place. Susan Birks reports on future potential in the UK market

The UK has the world's sixth largest economy by nominal gross domestic product (GDP) and the eighth largest based on purchasing power. The UK also has a long and strong tradition for pioneering new industries – a good thing, as many of its traditional manufacturing industries (steel, textiles, coal) have largely disappeared.

Despite the UK industry’s switch from commodity producing to becoming predominantly services-led, it still performs well in manufacturing sectors such as aerospace, medical devices and life science, as well as new sectors, such as information and communication technologies (ICT), advanced engineering and low carbon technologies.

Most relevant to the cleanroom industry, however, is the country’s considerable presence in pharmaceutical and life science sectors. The UK’s chemical and pharmaceutical industry is strong, with pharma exports accounting for around £18bn1 and some of the largest firms (GlaxoSmithKline and AstraZeneca) being based in the UK. Despite these major pharmaceutical players announcing job cuts and site closures in recent months, the UK remains a key location for pharmaceutical r&d and hence has many laboratories and sterile production cleanrooms. 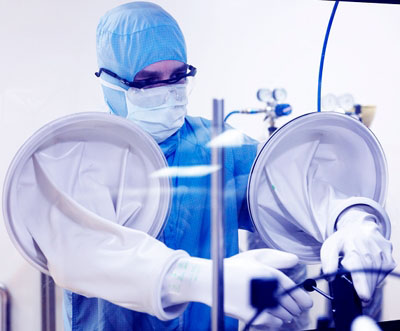 There are within the UK, an estimated 3,500 medical technology and biotechnology companies, generating a turnover of £15bn (2008).1 In terms of the sector’s geographical locations, the life science and healthcare trade body, One Nucleus estimates that London and Cambridge are home to at least 60% of the UK’s life science industry, four of the UK’s five Academic Health Science Centres and three of the world’s top six universities.

The Irish and Scottish regions are also strong in life science, offering a highly qualified scientific workforce. The IBIA, the main body for the biotechnology industry in Ireland, has more than 50 member companies and nine of the top 10 global pharma companies have sites in Ireland.

According to market research company Espicom, the UK has one of the largest medical device markets in the world, valued at £5.2bn in 2011.2 The domestic market vies with France as the second largest in Europe behind Germany. Per capita expenditure is equal to £83.2 The UK market for medical devices is predicted to increase by 3.5% per annum to attain a value of £6.2bn by 2016,2 thus cleanroom companies working in this sector may benefit from this growth. Active in this sector, GEA Healthcare opened a £10m medical technology manufacturing facility with cleanrooms last summer in Whitchurch, Cardiff. The General Electric subsidiary will use the facility to make products used to filter liquids and gases.

The UK spends around 8.4% of its GDP on healthcare – about 0.5% below the Organisation for Economic Co-operation and Development (OECD) average and about 1% below the average of the European Union.4 However, Epsicom reports the latest published government plans involve a 9% cut in capital health spending in 2011. The new coalition government has also unveiled a substantial reform programme for the NHS that could affect future expenditure on hospitals and consumables – although the private healthcare sector may increase.

The UK’s aerospace and defence industries are key players in world markets and major contributors to the UK economy. They are number one in Europe and second only to the US globally. The latter, together with security and space, employ more than 500,000 people across the UK; some estimates suggest they generate at least £60bn per year to the economy. Many smaller companies are involved in the supply of high-tech components and electronics, which require cleanrooms for assembly, and some of the aerospace companies are modernising and automating paint-spraying and assembly environments.

After a recent hiatus, space is once again seen as an important sector for the UK. The government and UK space industry want to increase the UK’s share of the £160bn global market from its current 6% to 10% in 20 years’ time. In a move to achieve this, a new UK Space Agency (UKSA) was formed in March 2010, with responsibility for government policy and key budgets for space.

Satellite production is another strong point. A success story in this sector is Surrey-based satellite company SSTL which, in partnership with the University of Surrey’s Research Park, is building a £10m facility opposite its headquarters in Guildford, to house cleanrooms, laboratories and testing facilities for space engineering. 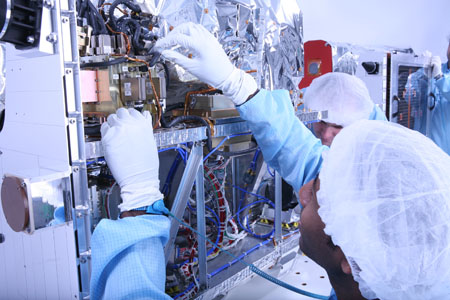 The automotive sector is a significant part of UK manufacturing and, according to UK Trade & Investment (UKTI) figures,3 contributes £9.8bn to the UK economy. Although it has diminished since the collapse of the MG Rover Group and most of the industry is now foreign-owned, six of the world’s top 10 vehicle makers have bases in the UK. Much of this activity is focused on the Midlands and the North East.

Nissan, Smith Electric and Avid Vehicles are also leading the way in electric vehicle development. As EU policy over automotive emissions testing becomes ever stricter, Jaguar Land Rover has been one of the first to upgrade its testing facilities with a purpose built cleanroom constructed by Bigneat.

The automotive components sector is partly focused in the North East where at least 220 companies produce goods and services worth around £1bn a year. The Midlands, meanwhile, is home to Motorsport Valley, a business cluster for the motorsport industry. Overall, some 3,000 businesses employing 25,000 engineers supply the UK’s automotive sector and, as vehicles get more high-tech, cleanroom assembly of components is growing.

The UK also has a long tradition in large-scale food processing and manufacturing, with many multinational brands. As with the pharmaceutical sector, recent pressures on costs have seen some of these multinationals move manufacturing outside the UK, to places where labour costs are lower. Despite this trend, the UK has many new food businesses that are growing and has wide-ranging food sanitisation expertise from organisations such as Campden BRI and the Society of Food Hygiene & Technology (Sofht).

While there is little semiconductor production in the UK, at the last count there were more than 10,000 electronics enterprises in the UK, employing at least 240,000 people, most of them small companies.5 The electronics industry’s turnover was estimated at £62.3bn in 2007, according to Annual Business Enquiry. The electronics and IT services sectors together account for approximately 4% of the UK’s GDP and employ around one million people.5

The UK has strengths in machinery components manufacture for products such as microprocessors; telecom equipment; consumer electronics; process control; instrumentation; optical and photographic equipment; photonics, lasers and lighting. Many of these are cleanroom users.

It is difficult to build an overall picture of the cleanroom sector due to its diversified nature. Specific statistical information is hard to come by, and the UK does not have a national cleanroom society, despite having more than 300 supplier companies active in the sector. Ireland and Scotland do have associations. Neverthelesss, the UK has many cleanroom experts active in the working groups tasked with formulating international standards.

Like other regions, the UK is experiencing an economic slowdown with reduced construction investment that is undoubtedly affecting cleanroom suppliers. However, new growth may come from the numerous high-tech businesses coming through.

4. OECD Health Data 2009 - How Does the United Kingdom Compare, Organisation for Economic Co-operation and Development