3D vision systems and robotics to reduce the release of particles 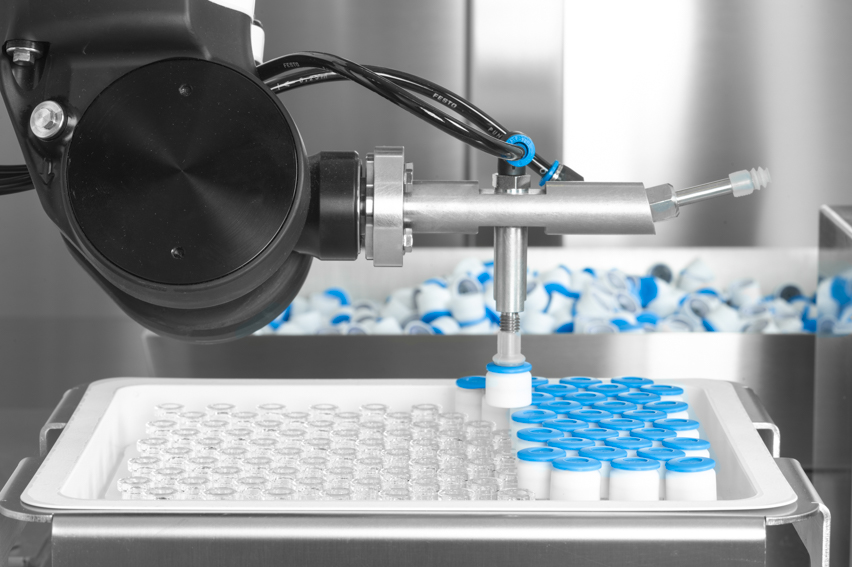 At the trade fair focused on the packaging and processing technologies and innovations for more than 40 vertical industry sectors, Steriline showcased its new Robotic 3D Control and Picking Solution (3D CPS) that includes core assets of both robotics and vision systems and which was developed in partnership with ISS – Innovative Security Solutions, a spin-off company of one of the most acclaimed technical universities in Europe (Politecnico di Milano).

The Robotic 3D Control and Picking Solution is a mechatronic component equipped with a vision system that can detect tools within a defined area and adapt its function based on the relative feedback. It is composed of a robotic arm, a picker, an infrared ray (IR) stereoscopic vision system and software for planning trajectories, accessing the recipe database and interpreting the input data coming from the sensors.

The robotic arm moves the picker throughout the working area, the dimensions of which can be modified based on the length of the levers. Sophisticated algorithms generate trajectories to allow the picker, located at the end of the arm, to reach the item, pick it up and then move it to its final destination. These paths are generated based on the information received by the 3D vision system which uses a stereoscopic vision based measuring technique: an IR source emits an IR light pattern that is visible to visual sensors and not to the human eye. The scattering of the light is detected, acquiring a profile of the scene. This technology allows the system to autonomously generate reliable trajectories for simpler and more linear movements and avoiding any collision with the surrounding environment.

The idea of introducing the Robotic 3D Control and Picking Solution into the pharmaceutical industry came from the visionary mind of Steriline’s Chief Commercial Officer, who’s primary objective was to implement robotics to avoid any sort of contamination in the primary packaging. “In the pharmaceutical industry” states Federico Fumagalli, Chief Commercial Officer at Steriline, “limiting the release of particles during sensitive processes makes the difference because it reduces the risk of contamination. With this in mind, we looked for different solutions on how to remove the main parts that increased the dispersion of particles during, in this case, the stoppering and capping processes so we chose to replace the hopper, the vibrating cup and the linear slide with robots combined with a vision system”.

Robotics also simplify format changes: “Flexibility is definitely an added value of robotic solutions” adds Alessandro Caprioli, Partner at ISS – Innovative Security Solutions, "In fact, with standard solutions, the production process and the relative mechanical parts need to be reconfigured in order to manage or handle a different container. With a robotic application, you generally only need to set up a different recipe
via the software”.

The best application of the Robotics 3D Control and Picking Solution is in the capping and stoppering activities for the primary packaging of small batches that require an aseptic environment, such as in personalised medicine and the production of cell and gene therapies.