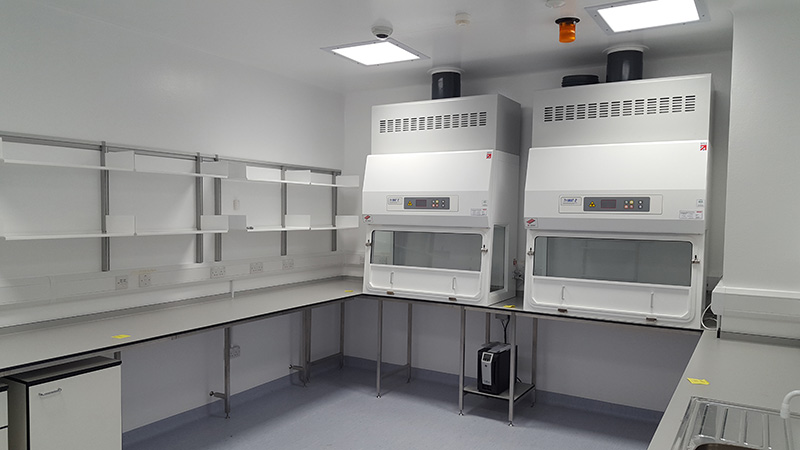 The completed suite is made up of two Category or Containment Level (CL) 2 laboratories and three CL3 laboratories. The containment level relates to the equivalent biological agent hazard group as defined by the Control of Substances Hazardous to Health (COSHH) Regulations and categorised by the Advisory Committee on Dangerous Pathogens (ACDP).

Construction of the Mostowy Lab

With Dr Mostowy preparing to join LSHTM, building his laboratory was a priority. LSHTM knew of MAT’s experience in this highly specialised arena, and approached the company to build the Mostowy Lab, as it is now called. A project of this size can take years to develop, with several months being spent on design alone. However, if the lab was to be ready for Dr Mostowy’s arrival, the team from MAT had just 30 weeks for design development, installation and commissioning. This was only made possible by close collaboration between MAT and LSHTM, and an absolute commitment from all involved to have the lab ready in time.

LSHTM stripped out the floor area in preparation for the new suite, with MAT designing the layout as well as the critical ventilation system. Special considerations included extra ventilation and cooling for a high-powered laser confocal microscope. LSHTM had confidence in MAT to interpret what was needed, working with its own project manager and safety team. Work progressed very smoothly, with decisions made quickly and efficiently as needed.

The Mostowy Lab would be investigating Shigella, estimated to be responsible for 125 million cases of diarrhoea annually and around 160,00 deaths, a third of which are young children

The major redevelopment of an adjacent LSHTM site was being carried out at the same time, so it was vital to co-ordinate works to ensure everything ran to plan. Working on a Central London site presented additional challenges around congestion and delivery. This was addressed through phased and out-of-hours deliveries, with everyone involved pulling together to ensure progress on both projects was unhindered.

The Mostowy Lab would be investigating Shigella, estimated to be responsible for 125 million cases of diarrhoea annually and around 160,00 deaths, a third of which are young children. Shigella flexneri is a Schedule 5 bacteria, as defined by the Biological Security for Pathogens and Toxins guidelines, and as such requires particular security measures, outlined in the Anti-terrorism, Crime and Security Act 2001. All areas in the new laboratory suite are SR4 security rated, as detailed in LPS 1175 Security Ratings, which relates to the physical security of intruder-resistant building components.

MAT has worked on many Schedule 5 laboratories, and was able to ensure that all necessary actions, checks and precautions were taken, demonstrating the importance of working with a specialist contractor on complex projects such as this.

The Lab in Use

The use of zebrafish is an emerging approach to studying infection, and one Dr Mostowy has helped to pioneer. In its first days of life, the tiny embryo zebrafish is completely translucent. This means scientists can examine what happens at a biological level when bacterial infection, such as Shigella, is introduced into its body via a microinjector – a microscope with an incorporated micromanipulator for precise needle positioning.

Anyone visiting the technologically advanced new lab, well equipped with a multitude of microinjectors and microscopes, will see scientists examining petri dishes containing the infected zebrafish embryos, using high resolution microscopy to observe incredibly clear images of the bacteria spreading and the immune system responding. It is hoped that understanding the mechanisms different infections use to attack cells and multiply will ultimately lead to the development of targeted ways to stop them.

Antimicrobial resistance (AMR) is considered by the World Health Organization to be one of the biggest threats to global health. MAT, along with everyone involved in the design and construction of the Mostowy Lab, was honoured to have the opportunity to play a role in something that could lead to the development of new ways to fight infection.