The new facility in the Netherlands meets the needs of infants diagnosed with specific medical conditions, such as cow's milk protein allergy, as well as producing standard infant formula 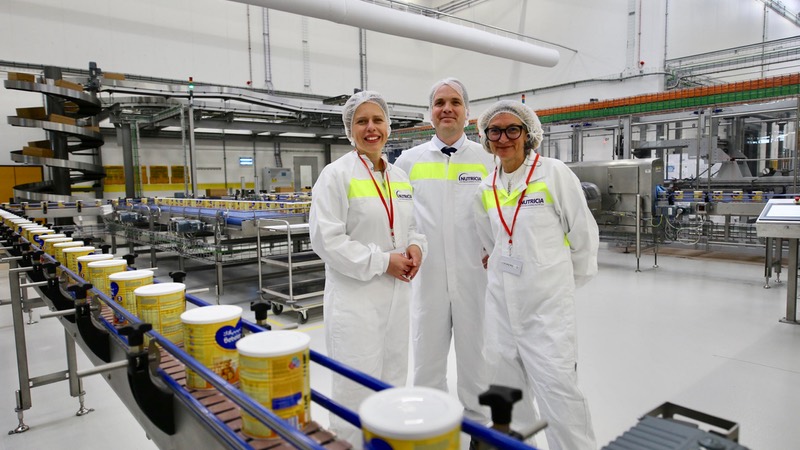 Danone has officially opened its new Nutricia Cuijk production facility in the Netherlands. The facility will primarily produce specialised infant formula that meets the needs of infants diagnosed with specific medical conditions – such as cow’s milk protein allergy, as well as standard infant formula. The €240 million investment is among Danone’s largest in its European production network in the last ten years.

The opening ceremony marks the completion of a three-year journey to build an energy-efficient, zero-waste plant.

“At this facility, we’ll be producing food for vulnerable babies; and we’re also doing everything we can to preserve a healthy and clean environment for future generations,” said Veronique Penchienati-Bosetta, Executive VP of Danone Specialised Nutrition.

The new Nutricia Cuijk plant has been built to further support the expansion of Danone’s range of specialised infant formula products specially tailored for babies with specific health needs.

The global prevalence of allergy is steadily rising, and approximately 2-5% of infants develop cow’s milk protein allergy within the first year of life. The Nutricia Cuijk plant employs a specific manufacturing process to produce foods for special medical purposes containing extensively hydrolysed protein to meet the specific nutritional needs of infants diagnosed with this type of allergy.

In uncontrolled environments, allergens can easily contaminate production lines. After the wet phase of production, the new facility has an automated cleaning-in-place to clean the equipment to avoid contamination, microbiological growth or pollution. In addition, when the products is put into big bags at the final stage, the product is checked for the correct composition, taste and colour and microorganisms.

The facility will replace an older, existing plant in Cuijk, which the company will gradually phase out.

Thinking of the planet

The newly-built Nutricia Cuijk facility uses advanced environmental technologies coupled with efficiently-designed manufacturing processes to ensure water and energy consumption, as well as CO2 emissions, are kept to a minimum.

Danone also targets reducing its full scope of carbon emissions. Therefore, Nutricia Cuijk sources dairy ingredients exclusively from western Europe – the world’s region with the lowest dairy farming CO2 emission rates. Of these ingredients, a significant majority are sourced locally, from the Netherlands and neighbouring Germany. Nutricia Cuijk also embraces the principles of the circular economy – 100% of the facility’s waste is recovered, including all packaging waste.

“Producing such highly specialised infant formula, our new facility builds on the scientific heritage of Nutricia, coupled with the latest green technologies. Today’s opening ceremony marks the next chapter for Nutricia Cuijk – here in the Netherlands, and as part of the Danone family,” Penchienati-Bosetta added.

Once fully operational, the new Nutricia Cuijk facility will employ close to 500 staff and will – through indirect employment – support up to an additional 2,000 jobs. With the support of on-the-job training, the entire local workforce will transfer from the legacy plant in Cuijk to the newly-opened facility. At full capacity, Nutricia Cuijk will produce more than 600 different products – including the well-known Aptamil and Nutrilon brands – for customers in over 90 countries, feeding more than three-and-a-half million babies daily.