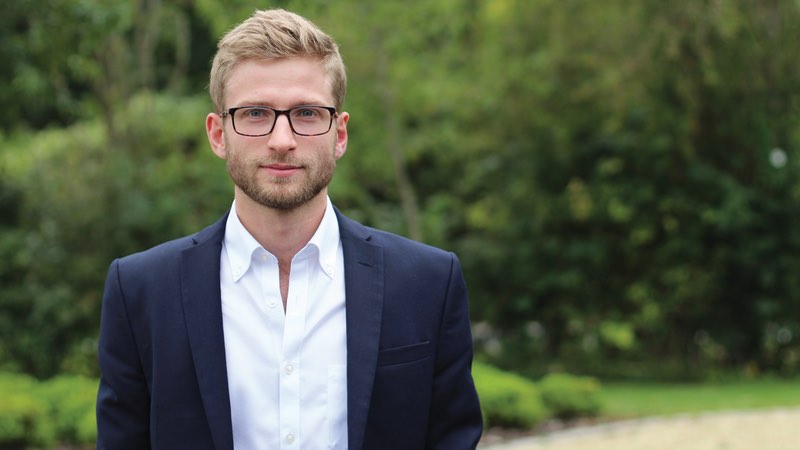 Andrew Davies climbed Mount Kilimanjaro leading a team of 20 students while at Oxford pursuing his degree in engineering. That day, he woke up at 2 am at 5,000 metres over sea level to start climbing while the scree slopes were still frozen. "it is a popular climb, so you feel like you’re competing for space with lots of other tourists, but you still get a significant sense of achievement when you reach the top!” he tells me. I can’t help but think that such a life experience is somewhat similar to what he tries doing as Managing Director at Microgenetics, the UK-based biotech start-up that since 2014 has been on the mission to gain a name in the microbiology market with solutions that use machine learning and real-time analysis.

Headquartered in Corsham near Bath in southwest England, Microgenetics operates from the premises of Qualasept Pharmaxo Holdings Limited, its parent company. Its sister company, Bath ASU, is a pharmaceutical compounding business dealing with one of the industry’s core challenges: medicines with very short shelf lives. Davies tells me how this inspired the birth of Microgenetics: “The traditional sterility testing method involves growing nutrient broths, and it takes seven to 14 days to get a result, by which time the medicine has already been administered, and it’s too late if there’s a problem; so Microgenetics was started as research collaboration with the University of Bath to find new rapid methods that could give a result much sooner.”

The impact of pathogens is on the rise, and I believe our technology will be able to help combat that

The research generated the technology behind SwiftDetect, one of Microgenetics’ first products on the market. SwiftDetect is a super-sensitive polymerase chain reaction (PCR) test that can identify down to a single microbiological cell in any sample volume, and yields results in less than six hours. While SwiftDetect was in the works, the company saw a gap in the market for an affordable, modern software for microbiological monitoring, and soon after SmartControl was developed with data integrity at its heart.

At Oxford, Davies specialised in machine learning and artificial intelligence (AI), technologies that today drive Microgenetics’ “revolutionary” offering. “I’m passionate about the positive impact [these technologies] can have,” he tells me. “SmartControl uses artificial intelligence to warn users if a photo they’ve captured of a sample is blurry or out of shot, and we’ll soon be able to provide an automated second check of the count of colony-forming units on a plate,” he explains.

Automated colony counters have been around for a while, but for Davies, they’re not accurate or reliable enough for use in strictly regulated companies such as pharmaceuticals. “Our novel machine learning approach will be much more effective,” he says, adding that being able to count the colonies is just the start. “I believe we’ll be able to provide a proposition for the organism of a colony based just off a photo and some information about where it was found, which is only made possible using machine learning techniques,” he claims.

Microgenetics employs 20 people, and it’s supported by its parent and sister companies. Such a backing puts the start-up in a privileged position. “We get to leverage the support of all the corporate group functions, and our team can focus on innovation,” he admits. The company is moving to a new purpose-built office and lab facility—on Qualasept Pharmaxo’s site—at the end of this year, “which will be an exciting step for us”, he says.

The pharmaceutical market might be one that Microgenetics knows best due to its origin, but as time goes on, the company has discovered more and more opportunities in other sectors. “We have a projects in the agricultural industry, and I can see us moving into food and water in 2020,” Davies explains. “For SmartControl, being cloud-based software, our target market is inherently global, especially if, as we hope, we continue to see increasing regulatory harmonisation. For SwiftDetect, which has more of a physical footprint, we’re focused on the UK for now, but we want to make the benefits available globally as soon as we’re able to.”

What is “revolutionary” about SmartControl? Davies tells me its cloud-based operation is unusual in our industry, and yet he foresees it will soon become widely adopted in all areas. “Being cloud-based gives better security and reduces the burden on company IT departments,” he says. “Best of all, it makes it much easier to validate the software as you can leverage much more of our testing as a supplier,” he adds.

Davies tells me that Microgenetics carries out comprehensive functional testing, via an independent external company, against the functional specification and issue the results. He explains: “Being cloud-based means the software we’ve tested is the software that customers access. As a result, the customer validation process is much more straightforward.”

Davies tells me SmartCotrol verifies that the functional spec meets the user requirements. It also reviews Microgenetics’ functional testing showing conformance to the functional spec, “which is normally the really long, painful part of the validation; simply reviewing ours saves a lot of time”, he says. And it ensures that the software has been correctly set up: customised to clients’ request, users appropriately trained, and relevant SOPs updated. Davies makes it clear that SmartControl delivers real-time analysis for microbiological monitoring rather than real-time monitoring, but tells me that the ambition is to extend its use in the future.

Regulatory bodies across the world are today particularly focused on the integrity of the environmental monitoring (EM) data, and that’s where SmartControl fits perfectly. “I was a bit disappointed not to see more guidance on the use of rapid microbiological methods in the new Annex 1, as with the impending explosion of cell and gene therapies, the demand for them will rise enormously,” Davies says. “Ultimately, regulators accept that [these methods] are needed, and I think they’ll take a pragmatic approach to validation,” he warns.

To the drawing board

The last few years have been the R&D phase of the company; Microgenetics released both of its products to market early in 2019, leading to the team growing rapidly in the last 18 months.

Davies hopes the growth trend will continue. “We’ve been developing our capability not just in microbiology, but in data science, machine learning, and diagnostics more generally,” he says.

Davies tells me that Microgenetics’ product development fits into two categories: “They’re either new applications or industries for existing technology, or new technology. We’ve got lots of exciting applications for SwiftDetect in agriculture, clinical diagnostics and food and water, which we’ll pursue over the next couple of years. Longer-term, we’ve started some early-stage research collaborations looking at drug safety among other things,” he says.

I first met Davies at Pharmig’s Annual Conference last year, and I was impressed by the passion and confidence he had in the work Microgenetics was doing. “We’ve got a cheesy vision for Microgenetics: to help humankind win the war against pathogens. The impact of pathogens is on the rise, and I believe our technology will be able to help combat that,” he concludes.

I learnt that as a kid Davies wanted to be pilot, but a colour-blind diagnosis put him off track to such a career. He persevered and joined the Royal Air Force reserves at university and flew for about 30 hours in RAF training aircraft; a testament to Davies as a man working hard to achieving his goals. 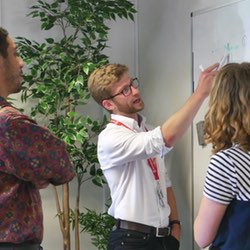 What is most challenging about being a newcomer in the market?

There’s a lot of well-established businesses in the industry that have earnt a certain amount of trust. As a newcomer, we must earn that trust from scratch, which inevitably takes time, but it also us the freedom to adapt and inn quickly, and I think our products approaches to validation speak for themselves.

How old are you, and have you felt underestimated because of your youth?

I’m 27. Everyone I speak to is only interested in what our technology can do for them, and I don’t think my age matters to them.

Do you see tough competition in this sector?

There’s plenty of competition. Although we stay aware of what others are doing, we’re trying to forge our own path. We concentrate on continuously innovating and let our products speak for themselves.

What are the common issues people tell you at trade shows, and how do you see Microgenetics offering fit?

One of the significant issues at the moment is sterility assurance for cell and gene therapies. There’s currently no widely accepted replacement for the traditional sterility test, which can take up to 14 days, well beyond the shelf life of many cell and gene therapies. SwiftDetect gives a result in just six hours, so it is a perfect rapid replacement.

The other issue is data integrity and a renewed focus on contamination control. The expectation of regulators is increasing, and the pressure will build on companies to take advantage of the data integrity benefits that come from software, particularly cloud-based software, and the enhanced insight that comes from employing AI techniques. That’s precisely why we built SmartControl for environmental monitoring, so we feel well placed to help companies with those challenges.

Do you think the pharmaceutical industry lacks innovation?

No, I don’t think it would be fair to say that it lacks innovation. You only need to look at the constant stream of new medicines introduced each year to see how innovative the industry is. But regulatory requirements do mean that it can take new technology longer to be adopted than in other industries, which can slow the pace of innovation. It’s essential not to resent this though; the regulation exists to ensure high quality and consistency, which gives us all safe products.

Do you think machine learning and AI are just trending buzz words, or can these tools really make a difference?

In general, I agree they have become buzz words, and I think the rate of change across all industries will be slower than some people are predicting. I do believe that governments need to be much more proactive in legislating on the use of AI. Otherwise, I fear we will be in a situation where it’s the big tech companies who decide how it can or should be used, and their interests are often not the same as the rest of us.

Governments not being proactive could also mean we fail to capitalise on the advantages they bring. Self-driving cars, for example, could revolutionise transportation and massively reduce traffic and pollution, but if sensible legislation isn’t put in place the technology will be available, but we won’t be able to use it.