Cold plasma technology use is picking up across various sectors. Danny Bayliss, New Technology Specialist, Campden BRI, explains the benefits and applications of the process as a dry decontamination method

Interest in cold plasma technology has been slowly increasing as food and drink manufacturers realise the potential benefits it can deliver for their processes; a non-thermal, dry decontamination with reduced shadowing impacts due to the diffuse nature of the chemicals it generates. The process only uses gas, sometimes air, and electricity to generate a host of antimicrobial chemical species at the source of treatment. It does so at a low power requirement.

Plasma is referred to by scientists as the fourth state of matter, because it exists beyond a gas state. When enough energy is applied to a gas it can become ionised, changing the properties of the gas from an insulator to a conductor, containing a mixture of reactive species, which can have antimicrobial properties.

This article describes plasma systems that are generated by applying electrical energy via electrodes to excite the gas. The types of power systems, the gas and the electrode design will impact the chemistry and the temperature of the plasma.

Applications of plasma technology currently available in the market are used in medicine (argon plasma coagulation), waste disposal, cutting applications and functional surface modification of materials for increasing adhesive properties of inks and multi-layers. Many of these applications use thermal plasmas but surface applications will typically operate non-thermally. Non-thermal plasma systems are also starting to show promise for the food and drink sector.

Some commercial systems generate plasma to remove odours from emissions but others also kill microorganisms present in the air. Passing microorganisms directly through a plasma discharge and exposing them to the electrons, ions and chemical species generated in the plasma can cause rapid inactivation.

The technology can limit or prevent the establishment of biofilms, by continuously reducing microbial numbers on processing equipment

Due to the short residence time, clusters of bacteria may not be completely inactivated in one pass, but the systems are designed to lower the microbial concentrations in the air.

Plasma systems that work with ambient air may generate ozone and/or other reactive nitrogen species (NOx). Many manufacturers aim to design their systems to minimise or eliminate the generation or escape of these gases.

The ability of this technology to rapidly inactivate a range of microorganisms has shown the potential to decontaminate process surfaces.

Currently, there are few, if any, commercial application of cold plasma in continuous equipment decontamination, but what is available is plasma surface cleaning. This application is focused on cleaning organic contaminates from materials that will be processed further, but is not specific for microbial inactivation.

Continuous decontamination of processing surfaces used during production has benefits for manufacturers. The technology can limit or prevent the establishment of biofilms, by continuously reducing microbial numbers on processing equipment. This improved microbiological control of equipment may enable manufacturers to reduce the time taken for effective cleaning or allow manufacturers to focus more on hygienically challenging areas of the factory.

Potential plasma systems for this application can be grouped into three main delivery systems:

The second and third types of plasma systems rely on the neutral chemical species, which can diffuse away from the electric field, generating plasma discharge.

There are still challenges in realising the full potential of the technology as a tool to decontaminate process surfaces, which is why it remains an area of active research.

There are still challenges in realising the full potential of the technology as a tool to decontaminate process surfaces, which is why it remains an area of active research

For some time, plasma has been used for the treatment of liquid waste; typically generated directly in or in contact with the contaminated liquid medium. The process relies on the efficient transport of reactive chemical species, created in the plasma, to the liquid.

Early research focused on the use of plasma to remove microbial and chemical contamination from the liquid media, which resulted in plasma reactor designs being proposed that enhanced the efficiency of the process.

While these approaches appear effective, with examples demonstrating the degradation of persistent pollutants, a disadvantage of these plasma-based techniques for liquid decontamination is the nitrification of the liquid, especially when air plasma is used. Given this challenge, further processing is likely to be required before the liquid can be released to the environment, adding cost and complexity.

Recently, much attention has been directed toward “plasma activated water” (PAW) for microbial decontamination. PAW is created by generating plasma in or in contact with water. This is a similar process to treating contaminated liquid. However, in this scenario the water is free from contamination. Through this process plasma generated reactive species are introduced to the liquid phase where they undergo a sequence of reactions yielding a wide variety of aqueous reactive oxygen and nitrogen species. These species range from ozone and hydrogen peroxide to short lived species such as hydroxyl radicals and peroxynitrite.

Several studies have shown that the application of PAW to a contaminated surface can give a high level of microbial inactivation. It is anticipated that the rapid inactivation observed is a consequence of the synergistic interaction between a wide variety of reactive species in the treated liquid. 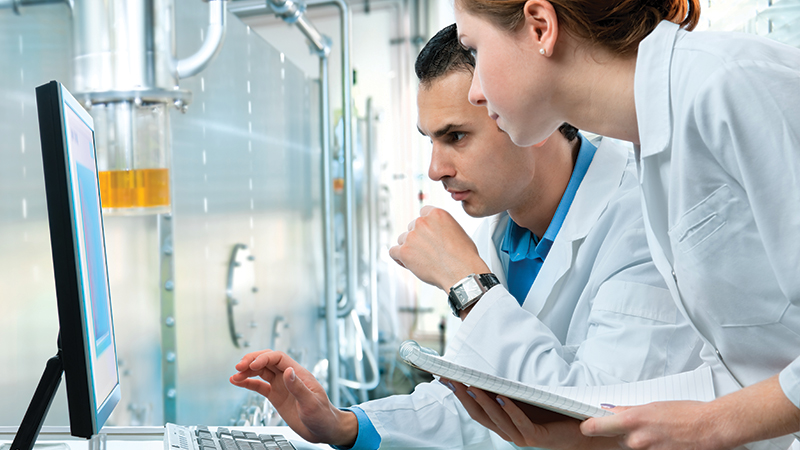 There are currently no commercial products on the market processed with cold plasma. Research has focused on applying plasma to a range of products including fresh produce, meats, bakery goods, dairy products, eggs, fish, nuts, seeds and spices. Applications of the technology have focused on microbial reductions for increasing food safety or product shelf life, or functional modification of ingredients.

The commercialisation of plasma technology for food decontamination faces a several challenges. These include understanding the optimum chemistry for microbial reduction and online monitoring. Other challenges include understanding the potential nutritional and toxicological impact on products and scaling the technology for mass production without limiting throughput.

One area of development has been in the application of plasma technology to ‘in pack’ products to reduce microbial levels and prevent product recontamination. In pack processing potentially allows manufacturers to scale the technology by generating the reactive species in the pack and allowing a longer exposure time during storage of the product before distribution. This is in addition to preventing recontamination.

An EU project, called SAFEBAG, has investigated in pack application with promising initial results for strawberry and cherry tomato products; a commercial prototype has been developed.

In Scotland, a company has developed a treatment that uses plasma to generate ozone in pack.Challenges with in pack applications are based around the impact of the process to the packaging material. This includes delamination, changes in migration or functional barriers, or break down of the packaging.

This technology, however, holds great potential for the food industry to extend the shelf life of the short shelf life produce and reduce waste if these challenges can be overcome.

Pathogen detection gets ever faster
Cleaning and disinfection seminar