What is ISO 8 cleanroom classification?

Each cleanroom class is denoted by a maximum concentration of particles per cubic meter or cubic foot of air. ISO 8 is the second lowest cleanroom classification

An ISO 14644-1 classified cleanroom is a room or contained environment where it is crucial to keep particle counts low. Typically, these particles are dust, airborne microbes, aerosol particles, and chemical vapors. Beyond particle counts, cleanrooms often have controls for a number of other parameters like pressure, temperature, and humidity. Additionally, to be considered a cleanroom, the space needs High-Efficiency Particulate Air (HEPA) filters to remove particles from the air.

ISO 14644-1 Cleanrooms are classified from ISO 1 to ISO 9. Each cleanroom class is denoted by a maximum concentration of particles per cubic meter or cubic foot of air. ISO 8 is the second lowest cleanroom classification.

The allowed particle counts for an ISO 8 cleanroom depend on the referenced standard and its measurements. According to US Federal Standard 209E, ISO 8 cleanrooms are also known as Class 100,000 cleanrooms.

ISO 14644-1 replaced the federal standard and states that an ISO 8 cleanroom needs less than 3,520,000 of ≥ 0.5 micron sized particles per cubic meter of air. Only particles 0.5 microns or larger are measured in an ISO 8 cleanroom. This is done because the concentration of smaller particle sizes is too high.

Designing a cleanroom requires taking additional regulatory standards and requirements into account based on industry and application. However, there are several general requirements and environmental parameters to consider for an ISO 8 cleanroom. For an ISO 8 Cleanroom, these include:

Since an ISO 8 cleanroom is focused on measuring particles 0.5 microns or larger, the HEPA filtration system needs to be 99.97% efficient and a minimum of 20 air changes per hour is recommended. The final filtration of air occurs where the air enters the cleanroom. Additionally, it is most common for ISO 8 cleanrooms to employ non-unidirectional or mixed air flow patterns with low wall air returns. Common ISO 8 Applications

A wide variety of industries and applications have cleanrooms. Some of the most common with ISO 8 cleanrooms include:

What is the difference between ISO 7 and ISO 8?

The two main differences between ISO 7 and ISO 8 cleanrooms are particle count and ACH requirements, which set them apart for differing applications. An ISO 7 cleanroom must have 352,000 particles ≥ 0.5 microns per cubic meter and 60 ACH per hour as opposed to ISO 8’s 3,520,000 particles and 20 ACH.

When is a cleanroom required?

A cleanroom can be used for a number of industries and applications. They are required for spaces where cleanliness and sterility are crucial. For context, an ISO 8 cleanroom is usually 5-10 times cleaner than a typical office environment. Specifically, in medical device and pharmaceutical manufacturing cleanrooms, the safety and quality of products is of the utmost importance, and raw materials, manufacturing processes, and finished product and can be affected if too many particles enter the space.

An environmental monitoring system is designed to gather, analyze, and notify on detailed cleanroom environmental data. For manufacturing spaces in particular, the goal of cleanroom monitoring is to assess the potential contamination risk of the product and remain in compliance with regulatory standards. 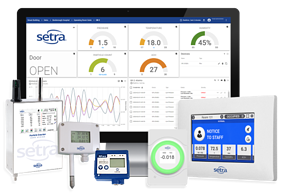 CEMS is Setra’s continuous environmental monitoring software that collects real-time data from in room cleanroom measurement sensors. Setra’s CEMS is a single system that can monitor a diverse facility with multiple locations, providing instant environmental data access and sophisticated analysis from a web-based interface accessible from any internet enables device. Real-time alarm notifications can be seen visually in software and sent to users via text message and email. Instant, up-to-date reports and graphs provide easy access to proper documentation for regulatory requirements. Setra’s CEMS helps to continuously monitor an environment during the manufacturing process to simplify operations, minimize the risk of contamination, and improve the quality of products.

CEMS accepts data inputs from a variety of measurement sensors, including:cems and hardware with wireless