Turnkey solution for a bespoke cleanroom

ClearSphere has delivered the design and build of a Class 7 cleanroom to an ABEC site in Ireland. The company tells CT how it happened on record time and on budget 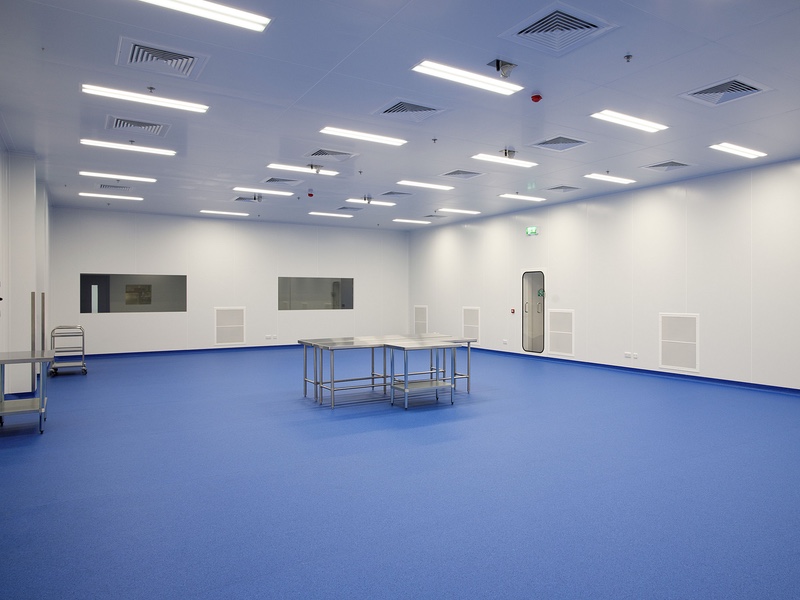 Equipment for use by the biopharma sector requires that all GMP compliance needs are met and the equipment is produced under cleanroom conditions. So when equipment supplier ABEC wanted a new cleanroom it turned to cleanroom solutions provider ClearSphere for help with the design and build.

ABEC specialises in delivering bioprocess equipment, integrated solutions and services for biopharmaceutical manufacturers. Its customer base features many of the world's pharmaceutical and biotech companies for whom it provides equipment engineering manufacture and installation.

The cleanroom requirements for its facility in Fermoy, Ireland, are similar to an existing cleanroom of ABEC’s located at Bethlehem, Pennsylvania; its US headquarters. A major requirement for ABEC cleanrooms involves accommodating the manufacture of the largest single-use disposable container available to the industry, which is 4,000 L. 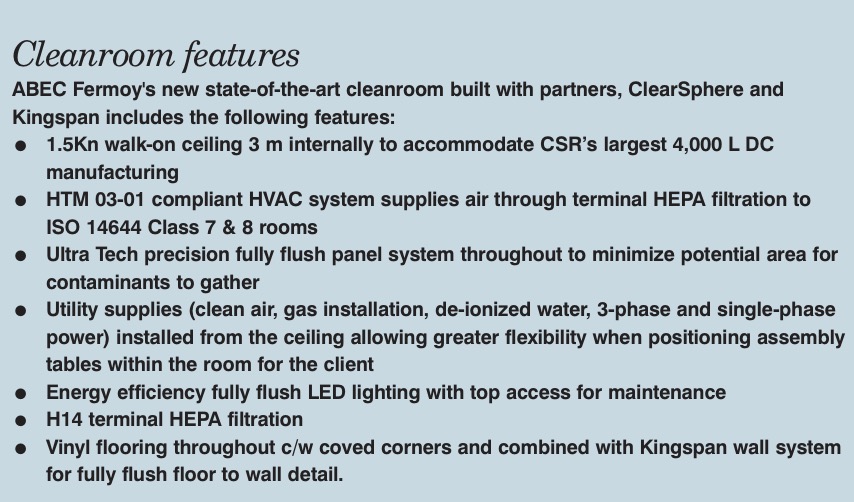 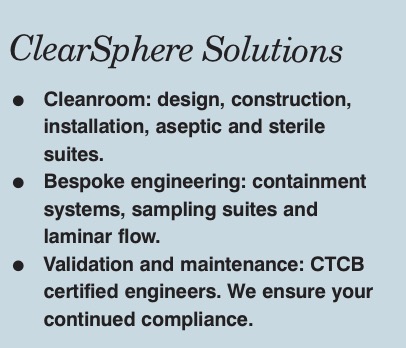 ABEC contacted ClearSphere in 2016 about providing a turnkey cleanroom system located in the main production building. ClearSphere, based in Ireland, was founded in 1989 and specialises in controlled environment solutions. It has been delivering cleanroom and containment technology to blue chip clients worldwide ever since.

The scope of works from ABEC was to include a standalone structural steel system, mechanical and electrical services (M&E), gas tie-in to house utilities, de-ionised water, compressed air, a new building management system (BMS) with PC and network capability and fully flush cleanroom system with maintenance access above the ceiling rated at 1.5 Kn/m2 in a fully certified ISO 14644 Class 7, 8 and CNC production suite.

The specification was developed over a series of design meetings into a final functional requirement specification (FRS) document and ClearSphere was able to offer a complete solution presenting the Kingspan Ultra Tech Precision cleanroom system to the client along with its other quality ISO approved suppliers. 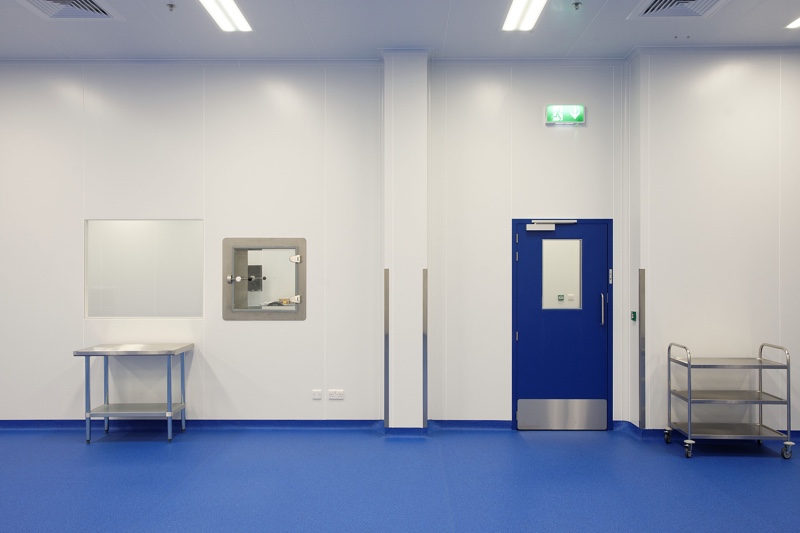 The M&E package was designed and specified fully in-house in conjunction with the FRS. The ventilation system was designed to meet the ISO classification 7 and 8 with HEPA filtration and low level return grilles.

Cork-based Mark Eire BV was selected as the AHU vendor. ClearSphere has been partnering with the Irish firm for a number of years based on its wealth of knowledge and experience.

The cleanroom door matrix consisted of fully flush interlocked doors and two automatic rapid roll doors for goods movement into the CNC areas and incorporated into the BMS system. Hormann Ireland, was selected as the vendor to supply and fit.

The in-house validation team at ClearSphere was positioned to ensure that everything – from design and installation through to operation and performance qualification – was covered to satisfy regulatory requirements. Following a successful tender process ClearSphere was awarded the project in December 2016.

The success of the project centred on reliable communications to the relevant project stakeholders, which were located in both the Fermoy site and in the US headquarters. Agreement of the main project master schedule and milestones allowed for the coordination, distribution and sign-off of the 3D/2D layouts, elevations, M&E process and instrumentation diagrams as well as product specifications.

An accurate schedule ensured long lead items were placed on order and the use of Revit software ensured clash detection was eliminated prior to commencement of site works.

A “just in time” (JIT) delivery matrix was scheduled and managed by the ClearSphere team – project manager, construction manager, site supervisor and installation personnel – to allow the client’s facility to operate on a 24-hour production cycle with zero downtime on any of the site facilities.

Site works commenced in February 2017 with the installation of a new independent structural steel; it required the addition of new foundation pads in the centre of the production factory. This steel frame system would be utilised to support a new AHU located above the cleanroom and the suspension of the 1.5 Kn walk-on ceiling. Installation of M&E services followed once the ceiling was completed.

ClearSphere operated a “bib” system to manage access and the use of the ceiling as a working platform, and to eliminate damage to ceiling panels’ integral structure. In tandem to this, installation of the floor track and cleanroom walls was ongoing.

Panelling was delivered as required and as per planned approach hence ensuring different trades having access to the areas speeding up the overall project and eliminating any risks associated with the build. Co-ordination was strictly managed by construction management on-site. 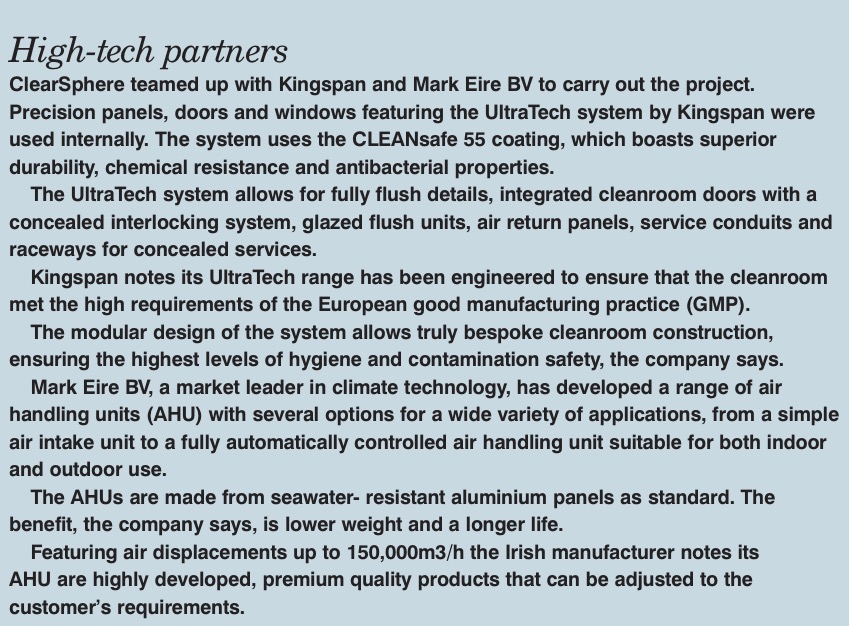 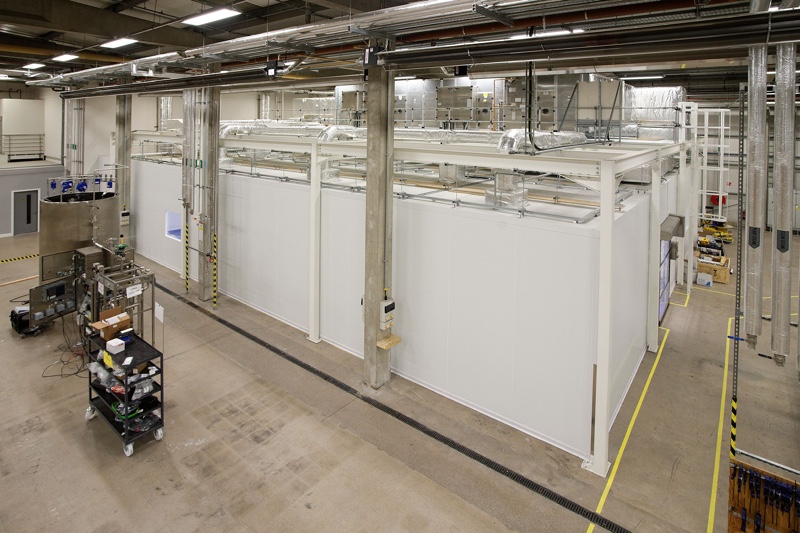 The facility was a live environment, hence safety was the top priority for both ClearSphere and ABEC in the speed of build. This process was managed through weekly toolbox briefings and daily white board meetings. Regular safety and quality audits were conducted throughout the project. First fix mechanical and electrical installation were ongoing and managed by ClearSphere team with project supervisor construction stage (PSCS) responsibility.

ClearSphere looks forward to working with ABEC in the future as there are plans in place to provide an ISO 14644 Class 4 unidirectional airflow along with ongoing validation and maintenance servicing ensuring continued compliance for ABEC and its customers.

“The feedback from ABEC is very positive, with the project being completed on schedule and budget,” commented Eric Rudolph, ABEC’s Vice President, Business Unit Manager, CSR.

“ClearSphere’s experience delivering turnkey projects, and ability to manage validation processes in-house was a major factor in selecting ClearSphere for ABEC’s Fermoy, Ireland cleanroom. ABEC is definitely prepared to manufacture CSR single-use disposable containers for our global customers. We look forward to working with ClearSphere in the future,” Rudolph concluded.