HEPA terminal filters have to meet strict filtration performance criteria but can account for 25–30% of the overall energy consumption in a cleanroom. ePTFE membrane media features a significantly lower pressure drop than traditional wet laid media but can also offer greater overall filtration efficiency thanks to its evenly distributed layer of fibres with very fine diameters

Emerging legislation and directives, as well as steadily rising energy prices, are enforcing an increased focus on reducing energy consumption. For critical applications that work in cleanroom environments this has resulted in an enhanced focus on more energy efficient cleanroom HVAC solutions.

Existing studies estimate that, on average, supply air fans and exhaust air fans can easily account for 25–30% of the overall energy consumption in a cleanroom. Installing air filters with a low pressure drop can contribute to reducing this percentage.

Comparative test results of HEPA filters in efficiency class H14 to EN1822-1:2009 demonstrate that ePTFE membrane media features a significantly lower pressure drop than traditional wet laid media (produced using a process similar to papermaking), adding up to 50%, depending on the exact conditions.

At the same time, the overall filtration efficiency for ePTFE membrane media has proved to be higher than for wet laid media with a Most Penetrating Particle Size (MPPS) typically between 0.06µm and 0.08µm (versus 0.10–0.25µm for wet laid media).

The lower pressure drop and improved efficiency for HEPA filters with ePTFE membrane media are achieved through a number of factors, two of which are explained below. 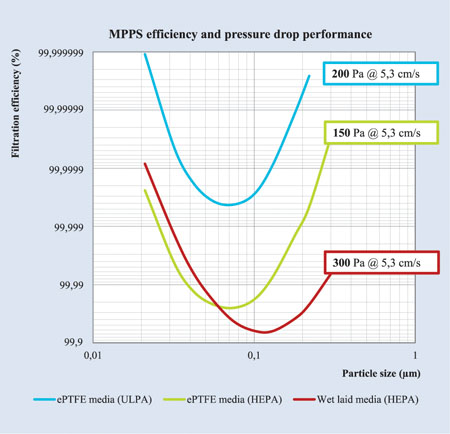 The composition of ePTFE membrane media is an evenly distributed layer of fibres with very fine diameters. Where typical wet laid media has fibre diameters in a range of 0.5–1.0µm, ePTFE has a much smaller unidirectional stretched fibre diameter in the range of 0.02–0.2µm. This finer nanometre-scale diameter allows air molecules to travel easily through the filter media. In the case of wet laid media, air molecules have to travel a longer path through a thicker layer of larger fibre diameters. More energy is required, resulting in a negative effect on operating resistance. 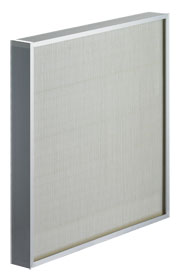 The very fine fibre diameters of ePTFE provide for the slip-flow air movement effect. This phenomenon, which is typical for nanometre-scale fibres <0.5µm,1 means that the scale of the fibre is small enough such that the distance between air molecules is significant in relation to the fibre size. As a result, the air molecules rarely collide with the fibre surface and retain their velocities.

Based on comparative laboratory test results for ePTFE membrane media and wet laid media, energy savings, such as those shown in the panel below, are achievable. 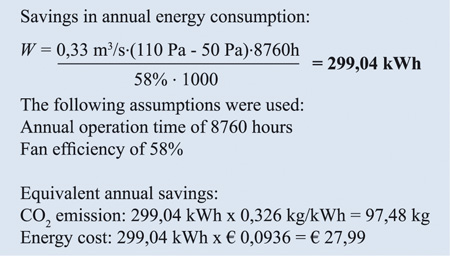 
Besides the direct energy savings, lower pressure drop also creates several other advantages, such as:

Enhanced process performance: In industrial sectors that rely on a high rate of r&d expenditures for maintaining their competitive edge, such as pharmaceutical and electronic equipment,3 improvement of process reliability is a constant factor of attention. In particular, the effects of airborne contamination in classified environments can have disastrous consequences on the quality of products and people’s health.

For successful commercialisation of new products, such as medicines and microelectronic components, a secure and well-controlled cleanroom is critical. For that reason, guidelines, such as EU GMP for pharmaceutical and SEMI E44 for microelectronics manufacturing, have been developed, which cover the layout of manufacturing processes in cleanrooms to optimise contamination control.

The choice of HEPA and ULPA filters plays an important role in the prevention of particulate matter from entering critical cleanroom environments. The filters are a vital part in the chain that assures that air quality conditions are met; any failure could potentially result in catastrophic contamination of both product and people.

Recent research, outlined below, has shown that air filters with ePTFE membrane media provide superior mechanical strength over traditional wet laid media. The risk of filter media failure is reduced, which in turn supports an improved operational reliability in cleanrooms.

Test methodology and conditions: First, tensile strength was determined for identifying the breaking force and breaking elongation for flat media sheets in accordance with DIN EN 29073-3. Each sheet was tensile tested at a speed of 100mm/min until breaking. Second, tensile strength to DIN EN 29073-3 was tested for pleated media sheets, folded at an interval of 4.8cm to 5.0cm. Third, burst pressure was measured for flat media sheets on a test surface of 10cm2 in accordance with DIN EN 13938-2. Finally, a comparative test was run on abrasion resistance of an ePTFE membrane media sheet and a wet laid media sheet in accordance with DIN EN 12947-2. At a weight-loading of 9kPa, it was demonstrated how many rubbing cycles were required until formation of a hole with a diameter of at least 0.5mm was evident. Tests were executed under ambient conditions of 20°C and 65% RH and repeated four times.

The results: The findings of the tests as described above clearly demonstrate the superior performance of ePTFE membrane media on all four different tests (Figure 2). 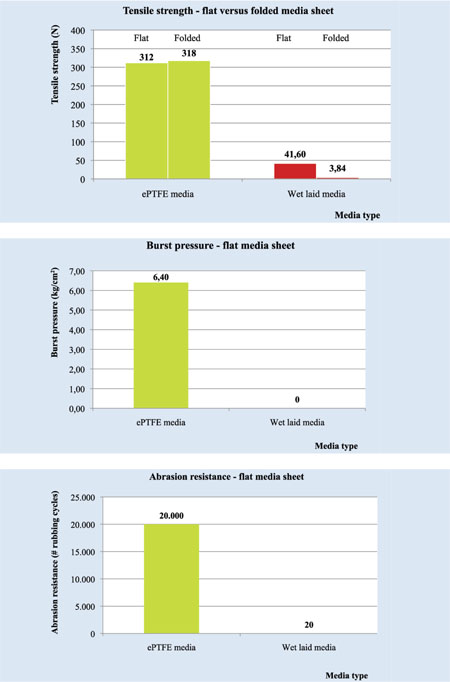 ePTFE membrane media reached a tear strength of 312 Newton, based on a flat sheet test, which is 7.5 greater than wet laid media. When folded, the difference became even larger with a factor of almost 83; the tensile strength of ePTFE remained on a comparable level, whereas wet laid media showed a substantial drop from 41.6 Newton to 3.84 Newton. The average elongation until breaking of ePTFE membrane media from the five sequential tests on folded media was established at 40.1%. Wet laid media showed a 0.3% result, with a similar drop observed for flat media sheets versus folded media.

Results of a burst pressure test indicate the sensitivity of both media types during handling or installation. For wet laid media, burst pressure could not be measured for all five sequential tests because of the lack of resistance against very low pressure; the flat media sheets burst before any measurements could be recorded. The ePTFE membrane media measured an average burst pressure of 6.4kg/cm2, proving a much higher resistance against potential damage and resulting integrity failures.

Testing the abrasion resistance of filtration media is a way to estimate potential fibre shedding, which could increase the contamination risk when entering the airstream. For wet laid media, 20 rubbing cycles at 9kPa weight-loading were required to form a hole with a diameter of at least 0.5mm. For ePTFE membrane media, at least 20,000 rubbing cycles were needed to form the same sized hole. This difference illustrates the much higher mechanical strength of ePTFE membrane media. For critical cleanroom processes this provides a significant opportunity to reduce any quality risk.

Risk reduction for critical processes: Risk management is an indispensable component of an effective quality system.4 In the case of products that are manufactured under classified conditions, such as parenteral medicine in ISO 5/GMP grade A areas, a consistent high quality must be guaranteed throughout the complete product life cycle. Measures should be initiated to reduce risks to an acceptable level. Risk is defined as follows by ISO/IEC Guide 73:2009.5

Specifically for the media of cleanroom terminal air filtration, this definition of risk can be rephrased as:

As the impact of terminal filter media failure can lead to the contamination of product and people, potentially resulting in loss of production volume, expensive recovery and recalls, the probability of filter media failure should be kept to a minimum. Based on the results of the comparative mechanical strength research, air filters with ePTFE membrane media contribute to reducing this first part of the risk equation.

Because of the high durability, the probability of filter media damage from handling, installation, maintenance and re-qualification activities is mitigated. But also during normal operation, when the air filter is not being touched, HEPA/ULPA filters with ePTFE membrane media reduce the risk of failure. It is a result of the demonstrated performance on tear strength and abrasion resistance that assures a non-fractured media fold and an elimination of fibre shedding.

As a consequence, there will be less likelihood of hazardous contaminants entering the cleanroom environment. It gives critical applications the possibility to optimise quality risk management systems for a consistent supply of quality products and a reduction of failure costs.

In conclusion, HEPA and ULPA filters featuring the latest generation of ePTFE membrane media will improve environmental performance and process reliability in critical cleanroom applications, such as in the pharmaceutical and microelectronics industries. They offer a pressure drop that is up to 50% lower than traditional wet laid media, directly translating into reduced energy consumption from the fan that pushes air through the air filter and other related advantages.

This article is a summary of the technical paper presented by AAF during the ICCCS 2012 Zurich symposium in Zürich (Switzerland) on 6 September 2012.

5. ISO/IEC Guide 73:2009. Risk Management - Vocabulary - Guidelines for use in standards