By floating delicate, heavy loads on a thin film of air, many space agencies and other production facilities with cleanroom environments have effectively turned their invaluable products into oversized, high-priced air hockey pucks. Mike Brown from AeroGo discusses the technology 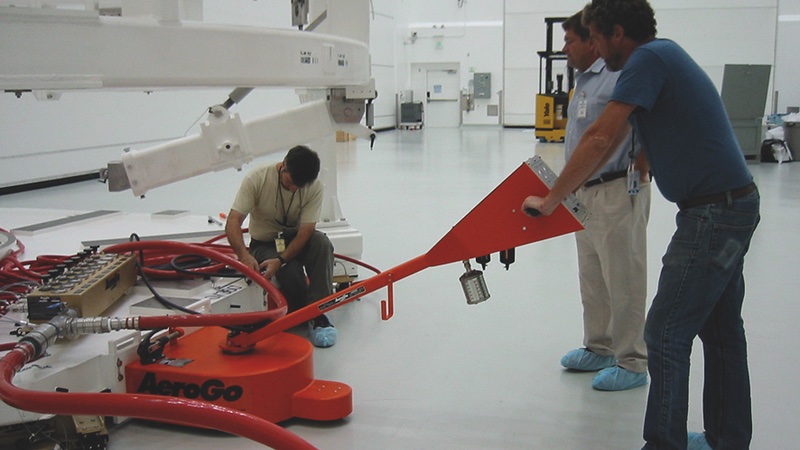 In a cleanroom environment, there is no margin for error when a single particulate of dust can be catastrophic. Contamination can cause damages and delays likely to cost the organisation millions of pounds. Such facilities require a material handling solution that can ensure safe movement and positioning of sensitive and expensive equipment without damaging the equipment or floor surface or injuring personnel.

An ideal solution can be found in the same technology that powers hovercraft and air hockey tables. By floating delicate, heavy loads on a thin film of air, many space agencies and other production facilities with cleanroom environments have effectively turned their invaluable products into oversized, high-priced air hockey pucks that can be easily transported and precisely positioned with minimal risk of damage. The transporting device? Air casters.

Air casters are a direct offshoot of hovercraft technology that was developed by Boeing in the mid-20th century using bladders filled with compressed air. With today's air casters, transporters equipped with doughnut-shaped bags fit beneath the load to be moved, where they are then inflated with compressed air.

Upon reaching full extension, excess air leaks underneath and forms a thin film of air less than a quarter millimetre thickness reducing the friction coefficient to less than 1%. Like an air hockey puck requiring only a tap to rocket across the table, reduced friction enables movement of ultraheavy loads with just a push. Floating objects need only one-tenth the force required for a similar weight on wheels.

Thus, a single operator can move a load weighing over 2000 kg with less than 11 kg of force, and a team of operators working in unison can easily move loads weighing up to tens of thousands of kg. Loads lifted on air casters are literally floating, which enables them to move omnidirectionally, make 90-degree turns and rotate in place.

Air caster-equipped transporters contain no internal combustion engine or bearings to be lubricated. Extremely heavy loads (10+ tonnes) can be propelled with battery-powered or air-powered drive units that work in tandem with the air casters, but most contain no power system, which means they produce no exhaust emissions.

Specially designed air casters can even capture their own air output, which can be particularly beneficial for aerospace and semiconductor cleanroom environments. In these instances, a skirt fits around the air caster and hooks into an exhaust removal system. All of the air forced into and around the air casters is captured and removed from the cleanroom, eliminating the risk of kicking up particulates on the floor into the air.

Air casters also work well in partitioned cleanrooms that may be vulnerable to cross-contamination. When an environment has been partitioned into sections, each with separate levels of cleanliness, it is often difficult to move equipment and machines from one zone into another without compromising those sections with higher cleanliness ratings.

One semiconductor producer, for example, needed to transport an 1800 kg inspection tool through three sets of double doors and a joint chamber. Air casters not only navigated this labyrinthine and multi-level cleanliness path but completed the task under the control of just two operators. By contrast, use of a crane means partitioned sections must be exposed for the crane to pass through. Rails and other in-ground transportation systems face the same quandary and unnecessarily consume valuable and expensive space.

Neither option is efficient, and both tend to create an environment that can trap dust and debris.

Successful equipment and machinery movement from point to point in cleanroom environments is a delicate task. It is much easier to move and finely control human-driven systems than it is to drive powered devices.

First, with powered moves, air casters accelerate smoothly, unlike wheels that require a surge of momentum to start moving. Second, wheel-based systems must swivel to change direction, creating a change radius that may not be workable in narrow cleanroom environments. 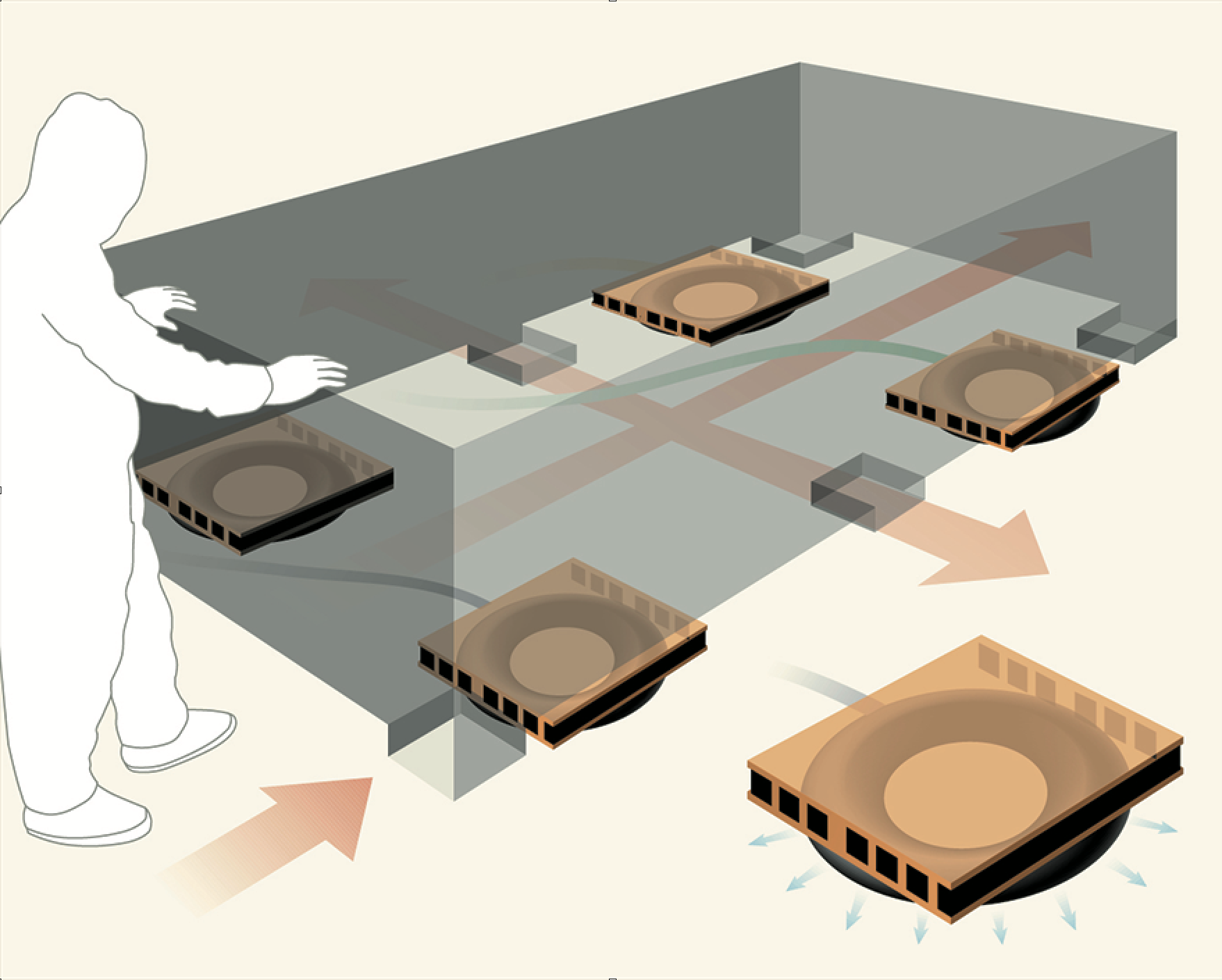 Like an air hockey puck requiring only a tap to rocket across the table, reduced friction enables movement of ultraheavy loads with just a push

Air casters, with no wheel rotation piece to extend the change radius and an ability to rotate omnidirectionally in-place, can enable micro-adjustments in position without any lurching motion. That can significantly decrease the risk of colliding with a wall or surrounding equipment. Similarly, semiconductor manufacturers and space agencies favour air-powered solutions for another compelling reason: load isolation.

With an inflated air caster, the load effectively rides on an air spring. Imperfections in the floor can transmit vibrations or shock loads to the equipment, but the thin cushion of air can isolate those vibrations and protect the delicate internal components of the equipment.

A 2020 survey of engineers by Keysight Technologies and Dimensional Research found repair costs for equipment issues like misconfiguration and preventable maintenance are unacceptable. Daily losses exceeded the equivalent of £70,500 for more than half of respondents.

An astonishing 5% of respondents reported experiencing daily losses that exceeded £703,800. The risk is so serious that one Japanese manufacturer of semiconductor processing equipment has mandated its customers to move equipment on air casters because it considers the risk with wheels and other movement technologies too high and costly. That's also why space agencies and aerospace manufacturers routinely rely on air casters for sensitive equipment moves.

In the US, NASA uses air caster-equipped transport systems to load satellites out of the cleanroom environment into sanitary containers destined for the launch pad, where an overhead crane transports the loaded canister and completes its journey to launch.

Daily losses exceeded the equivalent of £70,500

Cleanrooms are extremely costly to build and maintain. Construction of a modest ISO Class 7 or 8 facility, which would be limited to 352,000 particles (at 0.5 μm) and require at least 60 air changes per hour and can cost hundreds of pounds for each sqm, not including ongoing maintenance expenses.

New facilities that plan for air casters, however, can maximise productive space. Since air casters fit within the footprint of the load, lighter loads that can be moved by hand with air casters do not need as much extra space to move.

In the US, a biopharmaceutical manufacturer whose plant was designed for air casters, reduced hallway width by around 15 cm and, in the process, saved the equivalent of millions of pounds in building costs. That's not the case for a facility using tuggers that necessitate wider hallways to accommodate the size of both the load and the tugger. A facility using tuggers or similar solutions faces additional costs and reduced capacity and throughput. Clearly, manufacturers benefit by keeping cleanroom facilities as small and tightly packed as possible. Air casters enable them to utilise narrow corridors without losing mobility.

Many cleanrooms use specially treated flooring and, in some cases, raised floors with limited loading capacity. Regardless of type, the integrity of the floor on which the transporter operates must be preserved. Air casters are better suited to meet that challenge by spreading the load over a larger surface area. Wheels typically have a much higher point load and –most importantly– cannot load share.

A typical forklift, tugger or other wheeled vehicles easily transmits barometric pressures (bar) in excess of 70. Air casters can transmit as little as 0.15 bar and rarely more than 3.5 bar, thus lessening the risk of damage.

That difference was certainly meaningful to one semiconductor manufacturing operation that had to transport a wafer prober with a chiller unit weighing over 2,000 kg as often as four times daily across delicate vinyl composition tile. Its air caster transporter distributed the load so evenly that total floor loading never exceeded 1.7 bar. The casters protected the floor surface not only from outright breakage but also from scratching, grinding or gouging that could have released particulates or other contaminants into the cleanroom environment. To further reduce floor loading on particularly delicate raised floor panels, specialised air caster vehicles are recommended.

Equipment sensitivity, floor pressure, and dust containment are key areas that must be addressed to ensure the successful and incident-free movement of expensive and delicate equipment in the cleanroom. The emission-free technology alleviates floor pressure on raised or epoxy floors ensuring a safe and controllable operation while its floating nature provides a smooth and frictionless move that avoids harmful impacts on instrumentation and calibration.

More industries than ever are overcoming the challenges associated with these environments by turning to air casters as their standard method of material handling across all cleanroom applications.