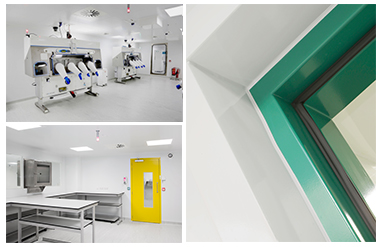 The Kingspan UltraTech Precision Cleanroom System has been used to create a new Aseptic Compounding Unit within the Pharmacy Department at St James’s Hospital, Dublin


As the largest academic teaching hospital in Dublin, St James’s Hospital is dedicated to being a place in which education and research in health science can thrive for the benefit of both its staff and patients. In line with this commitment, the new ACU, designed and built by BAM Ireland, provides the hospital with the facility to manufacture chemotherapy and biological preparations that are specially tailored to an individual patient’s requirements.

The Kingspan UltraTech Precision Cleanroom System was specified by BAM Ireland to produce a modular cleanroom within the hospital’s Pharmacy Department. The system comprises of high performance insulated panels with a flat non-porous surface to both sides. This surface aids cleaning and is resistant to mould, moisture ingress and bacterial growth, ensuring a controlled, sterile environment which minimises airborne particles and microorganisms.

The walls and ceiling of the ACU were constructed from 80 mm thick UltraTech Precision ECOsafe PIR panels. The panels have a thermal conductivity of 0.019 W/m.K and are resistant to attack from mould, fungi, mildew and vermin. They also allow for fully flush details, including integrated cleanroom doors with a concealed interlocking system and glazed units built into the panels themselves. These details, in addition to the UltraTech Adjustable Aluminium Flooring Profile engineered to provide a fully flush wall panel to floor detail, ensured that the cleanroom met the high requirements of the European Good Manufacturing Practice (GMP) Grade C. The pre-finished corners of the system also meant that no additional exterior corner details were required, improving the aesthetics and making it easy to clean in accordance with ISO 11998.

For the internal partition walls, IPN QuadCore panels were specified due to their superior fire protection as Michael Matthews, Technical Manager at BAM Contractors Ireland, explains: “From an economical and performance point of view, the Quadcore panels were a more cost efficient solution for the internal walls, in comparison to mineral fibre or an aluminium honeycomb system. Having the panels fully certified to FM 4882 requirements also made it easy to get approval from the local fire authority.”

All the surfaces of the cleanroom are coated with Kingspan CLEANsafe 55 to meet the demanding cleaning protocols of the hospital. The chemically inert polyethylene terephthalate (PET) film and polyester (PE) paint makes it suitable for any humid and chemically aggressive internal environment.

Michael Matthews commented further on the construction: “The panelised system was easy to install, allowing us to establish a fast track construction programme whilst maintaining the required clean build protocols. The flexibility the system offered not only meant the services could easily be incorporated, but also that we were able to complete the cleanroom envelope at an early stage of the project, and then remove walls to move in the client’s equipment at a later stage of construction.”

All Kingspan UltraTech Cleanroom Systems are backed by exceptional support service from Kingspan’s experienced technical team, from initial concept through to the detailed 3D design, manufacture, installation and project handover.

The Systems are fully compliant with the cGMP and ISO 14644 Cleanroom & Associated Controlled Environments Standards, and are covered under the Kingspan Ultimate Panel Guarantee. All Kingspan manufacturing plants are ISO 14001 accredited and the system panels are fully recyclable at end of life.