How do flexible film isolators shape up?

The ‘flexibility’ of flexible film isolators represent a real benefit in today’s rapidly evolving pharmaceutical landscape. Validating their use for APIs and HPAPIs means demonstrating that they can go toe to toe with rigid designs for operator protection. Written by Martyn Ryder 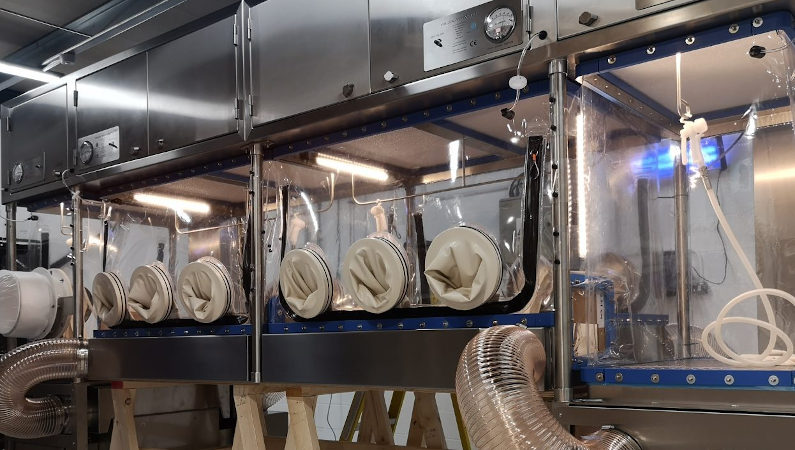 Flexible film containment systems are winning over many more pharmaceutical customers. Why? Lower cost, faster delivery, and easy to upgrade as the process develops are some of the key wins but the biggest benefit is the elimination of cleaning validation vastly reducing campaign change over times when differing API’s are being processed.

So, with many seeming advantages over the classic stainless steel containment isolators, can flexible film designs really deliver on the most critical requirement, namely operator protection performance?

Campaign use nature of flexible film isolators must be factored in

Clearly a rigid stainless-steel isolator of good design with an effective negative pressure cascade and a well-engineered contained connection for product infeed and out feed (RTP etc) is going to deliver a very high level of operator protection performance.

By comparison, a “disposable” flexible film isolator, however, may only have a double zipper airlock for product loading and a continuous liner system for product exit and whilst in operation with correct SOP’s, we would anticipate effective containment performance. But what happens at the end of the campaign, when a highly contaminated flexible isolator will be taken down for disposal?

Contaminated enclosure disposal is a serious potential weak point in any flexible film isolator design. Some vendors may stipulate safety during disposal is wholly dependent on effective SOP’s for clean down and decontamination before enclosure removal, however, in my opinion, reliance on SOP’s for such a critical pass/fail situation where staff members may be contaminated by the

enclosure disposal process is unacceptable. Particularly where the hazard presented by the API or worse HPAPI is acute. 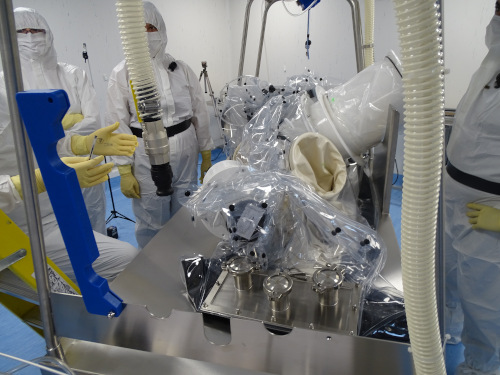 Testing protocols for many containment devices are set out in the ISPE Good Practice Guide APCPPE2 and from this guide’s inception in the late 1990’s “SMEPAC” has created an essential level playing field for sampling positions, surrogate APIs and interpretation of results.

For flexible isolators the GPG states: “Where the glove bag (flexible isolator) is to be removed and disposed of it is important that one cycle of decontamination, removal and disposal are included in the scope of testing so emissions during these activities can be established”.

In 2018, an updated version of EN689 was released. This guideline provides a general strategy for ensuring compliance with an airborne exposure limit with some further scrutiny of operator size and activity levels. 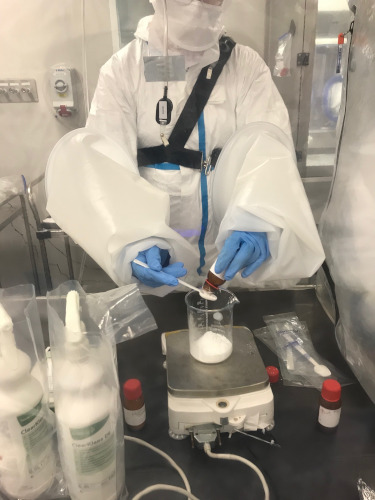 EN689 calls for any activity-based containment test to be repeated over three runs with three differing operators forming a “Similarly Exposed Group” (SEG) for statistical analysis. More interesting from the isolator vendor’s perspective is that EN689 (2018) set the pass/fail line at only 10% of the containment performance target. This is based on a task-specific representative run time and not diluted down by the “old practice” of 8 hour TWA.

So here in 2021, we have some very demanding pass/fail criteria for testing all isolators and this is a good thing as it ensures that even on a “bad day” we are maintaining critical operator safety levels.

Looking at flexible film isolators what specific tests are required to ensure safe levels of containment from cycle start to cycle end? 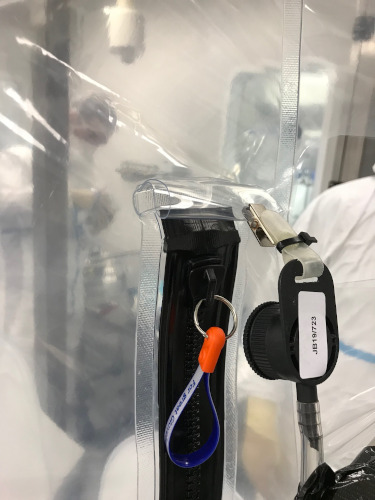 Whilst the flexible film containment system may have many advantages over the classic stainless steel or hardshell designs, when performance testing flexible designs we must to factor in more operation-specific / workflow procedure-based activities and, in particular, the disposal of the contaminated flexible enclosure if we are to accurately validate containment levels from beginning to end of the flexible isolators life cycle.

The message here is that the campaign use nature of flexible film isolators must be factored in when developing containment testing protocols.

Failure to test the complete end to end operational cycle of a flexible isolator leaves the most serious operator exposures tasks (enclosure removal) untested and with a very real risk of accidental exposure to API residue or, more concerning still, HP API residues.

We have worked along side Pharmadagio, a London-based specialist occupational hygiene consultancy, who have been very collaborative in setting up challenging isolator testing protocols.

The data below shows sampling results from an HPAPI isolator where the containment performace target was 10 ng/m³ task specific. Here Pharmadagio set up a specific challenge based on “operationally representative powder transfers” Using a 50 g container of Naproxen Sodium as the surrogate API for a 10 g representative dispensing operation. The test runs closely mirrored the agreed operational activities which were developed in detail during the isolator FAT. 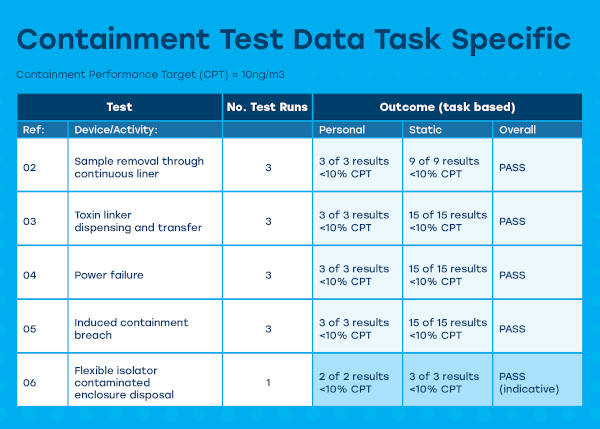 Analysis was done via SafeBridge’s high accuracy assay method provided an LOQ of 0.0500 ng/sample. Here all samples demonstrated levels significantly below 10% of the CPT, demonstrating for the purposes of the test runs that in both normal operation, upset conditions (power failure & breech conditions) the isolator attained the required containment standard. In addition, after a 4 day period of contamination with the surrogate API, the contaminated enclosure could be removed safely.

The above test is not in isolation, during 2019 and 2020 several similar containment tests were carried out to all to EN 689 standards (10% CTP) with similar results.

All of the above designs feature a fully disposable enclosure kit where the contaminated enclosure may be disposed of as a fully sealed entity where even the HEPA filters and continuous liner ports stay bonded to the contaminated enclosure during disposal. This dramatically eliminates any risk of contamination breakout compared to an isolator with a stainless base tray and stainless steel liner ports – all requiring service work that may lead to exposure risk.

In conclusion the extensive test data collated by Solo Containment provides reasonable evidence that in normal operation a negative pressure flexible film isolator is capable of delivering containment performance equal to that of the hard-shell equivalent.