New standards in the automotive sector have led to a need for greater precision in emissions testing. Bigneat describes the new controlled environment system it has installed for Jaguar Land Rover

New standards in the automotive sector have led to a need for greater precision in emissions testing. Bigneat describes the new controlled environment system it has installed for Jaguar Land Rover

Producer of modular cleanrooms, enclosures and cabinets for laboratory robotics systems Bigneat Containment Technology is an established supplier to the pharmaceutical industry, but recently customer demand has come from elsewhere and has seen the performance of its technology reach new levels.

Bigneat has supplied and installed a system for the Emission Test Laboratory of Jaguar Land Rover (JLR). The test laboratory is housed at JLR’s Product Compliance Centre in Solihull, UK. This Centre is one of the most modern end-of-line facilities in Europe and is an important element in JLR’s commitment to reducing emissions and working toward greater environmental efficiency.

Until recently, European and US legislation has only focused attention on the emission of particulate from diesel engines, also referred to as compression ignition (CI) sources. However, over the past few years, legislative amendments on both sides of the Atlantic have introduced more rigorous standards governing the measurement of particulate emission from both diesel and petrol engines employing direct injection (DI) technology.

To date, the quantity, composition and size of particulates from CI sources have been reliably measured with existing technologies. However, the new requirements for petrol-engined DI sources and the mandatory introduction of diesel after-treatments have resulted in specifications calling for sample masses of considerably lower magnitude.

Desiring not only to meet but exceed these new regulatory standards, JLR decided to upgrade its particulate emission testing capability to obtain more precise and consistent test sample results than previously.

The measurement of particulates in exhaust emissions requires the assessment of filters through which exhaust fumes have passed. However, the problem encountered here is that sample mass collection and filter paper media can be influenced by secondary factors such as moisture, dust, electrostatic effects, temperature and air buoyancy.

JLR knew that by the precise control of air cleanliness, temperature and humidity, it would be assured of more consistent and thus more accurate test results.

It was decided that an automatic weighing system, the F-A747 Filter Robot from Mettler-Toledo would be required. This system allows for up to 60 filters/hr to be weighed to an accuracy of ±0.1µg – well within present and upcoming US and EU emission standards. Options for installation of the weighing system included locating it within a cleanroom that JLR would build or installing it within a bespoke enclosure that would offer greater flexibility in the location of the system.

A specific customer requirement was to have good access to the testing equipment for loading and maintenance without a period of temperature and humidity stabilisation. Essentially, this was to be an ‘open’ system.

The challenge in front of Bigneat was twofold. First, the requirements specified the development of a high-quality controlled environment system that would allow for constant monitoring and adjustment of the air temperature/humidity balance. Second, the system needed to provide the operator with a high level of protection from potentially harmful exhaust particulates.

Controlling air temperature and humidity within a clean air system is a technology already available within Bigneat’s enclosures; however, in this particular case the very fine control of the air quality required would make the system innovative in many respects.

Bigneat, working from JLR’s initial design proposal, was able to design an enclosure that fulfilled the ‘open system’ requirement. The company’s suggestions led to the concept of converting an existing room into a cleanroom using the make-up air from the same plant that was running the enclosure. This ensured that very fine control of the various compartments would be possible within the cabinet with minimum plant running costs.

The clean, particulate free, air supply for the enclosure and the test room is provided by the filtration and conditioning plant housed below the preparation area workbench; air is first passed through high-capacity HEPA Class H-14 filters capable of handling three times the design-flow requirement of 1000m3/hr, filtering with an efficiency of >99.995%. It is then conditioned by passing it through a chilled water-cooling coil plant to reduce its initial temperature and dehumidify. A heating element raises the air temperature when it falls below 23°C ±0.5°C. Steam is then injected into the airflow from a separate humidifier unit to correct the humidity.

The entire system is controlled and monitored by a precision electronic control system. The control system is where precise management of the recirculating and room ‘make-up’ air fan velocities is constantly calibrated. All operator and service engineer functions, settings and calibration during operation are applied via the menus selected by a ‘soft-key’ control panel. An audible alarm warns of low airflow conditions.

An innovative feature of the project is the provision of clean air (‘make-up’ air) into the especially dedicated room. This is achieved by mixing filtered air (unconditioned air) from an external plant mixed with the filtered, conditioned recirculating air, developed within the conditioning plant underneath the enclosure. Airflow throughout the system, for both the external and internal airflows, is via the HEPA Class H-14 filters.

Contamination risks are minimised – and consequently, operator safety much enhanced – by virtue of the fact that the preparation enclosure receives both downflow air from the main fan, as well as recirculated inflow of air from the room, creating downdrafts at both the front and rear of the sample storage area.

An absolute requirement specified by JLR was that the balance table for the F-A747 Filter Robot was to be vibration-free. This was achieved by ensuring that the support frame and ancillary environmental conditioning equipment was isolated from (i.e. not secured to) the enclosure. The main fan blower, which generates all of the enclosure’s internal airstreams, is roof-mounted at the rear and right-hand side; the air conditioning unit with its internal fan was similarly located to the far right, but below the preparation enclosure. Thus, to ensure a vibration-free weighing enclosure, all moving parts equipment was situated as far away as possible from the weighing compartment.

Status indication of the installed Mettler-Toledo F-A747 robot is provided by a tri-colour beacon system, with a repeater beacon system installed in the outer test room.

The new controlled environment cabinet was subsequently named by JLR as the Tesla Automated Cleanroom 1000. Although this application was for automotive, Bigneat sees a wide range of possibilities for this technology and will apply the expertise developed on the JLR project to a wide range of areas – blood and cell culture incubation, micro-economic plant and seed propagation, as well as potential areas in the pharma industry.

Variations in operational atmospheres can be specified to within the following parameters: Humidity (<1% to 85% RH); temperature (4–40°C); Clean Air (ISO Class 5 to EN 14644 Standard); and Modified Atmospheres for aerobic, hypoxic or anaerobic conditions. 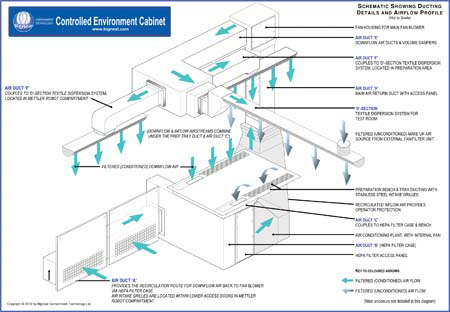 HEPA filtration provides ‘downflow air’ to ISO Class 5 classification, with temperature and humidity controlled at positive pressure within the enclosure.