The urgency of pandemic builds means extremely tight turnaround demands for design and build providers. An example of this is the new 425 sqm cleanroom in Wales that aimed to produce high grade face coverings and masks for front line workers 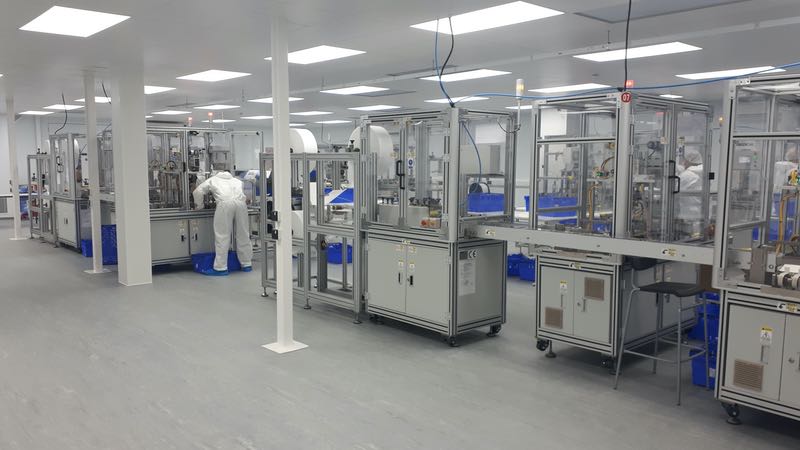 The COVID-19 pandemic and the new government advice/rules on mandatory face coverings has seen a huge rise in demand for face masks. But how can the UK government satisfy such a large and sustained increase in demand without impacting on the supply of face masks for the countries front-line National Health Service (NHS) staff? The answer: build new state of the art facilities in accelerated time frames.

One such facility is located at British Rototherm, in Port Talbot, Wales. Cleanroom Solutions was tasked with the design and build of the brand new, 425 sqm cleanroom.

The facility was designed in a matter of days, built in 4 weeks, with production equipment installed at the end of week 4. This proved to be an immense challenge and an even greater achievement, testament to the national effort we have seen throughout this pandemic.

The facility is an ISO Class 8 cleanroom to ISO 14644-1, which is required for production of high grade face coverings and masks for front line NHS workers. The cleanroom included changing room and goods in/out airlock for production materials. The facility was fully air-conditioned for comfort conditions.

Due to the extreme urgency of the build and difficulties getting construction materials at short notice, the build programme had to be modified. The walls were erected before the steelwork and temporally supported until the steelwork was delivered and constructed. 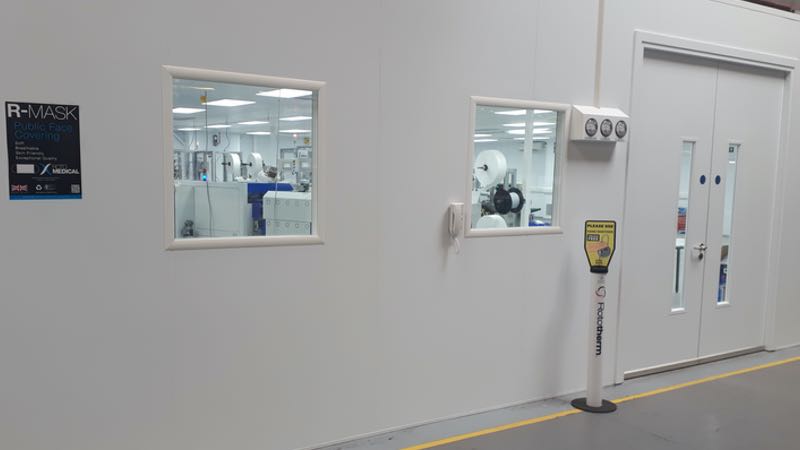 The walls were then connected to the steelwork, and this was followed by the suspended ceiling. As soon as a section of ceiling was in place, a second team began working on fitting the fan filter units (FFUs) and lights. Finally, the vinyl floor was laid, enabling the client to start to move their production equipment in. Whilst the equipment was being installed the ceilings were sealed and the room tested and validated.

From planning to completion, the project was closely followed by national UK news outlets, such as The BBC and ITV news. Labour MP Stephen Kinnock visited the site as the project was nearing its end and was immensely impressed by the effort and workmanship involved with the facility, especially in keeping within such challenging time frames.

Upon completion, the Secretary of state for Wales The Rt Hon. Simon Hart visited the site to meet the team and highlighted how great it was to see British companies successfully working under extreme time pressures to manufacture high-quality PPE to protect our front line workers and the wider community against COVID-19.

Cleanroom Solutions Site Director, Sean Gaylard, said: "This has to be one of the most challenging cleanroom installations that I can recall us taking on and completing. In light of the current world pandemic with many manufacturers and suppliers still on furlough, we managed to have the cleanroom ready for the production equipment within 4 weeks. A great team effort."

British Rototherm Managing Director, Oliver Conger, added: "The commitment to meeting and achieving a very tight project schedule was tremendous and the quality of the build was first class. The team worked very well with our own operations team and this made it a real pleasure and we built up a very good working relationship with them and a high level of trust. We would highly recommend Cleanroom Solutions to anyone looking to build a cleanroom, particularly if you are under any time pressures such as ourselves."