A to Z of an effective monitoring programme

A successful monitoring process allows control of contamination for regulatory or product yield reasons. John Merrill from C2C explains monitoring results can be used for trend analysis by comparing data with subsequent air samples, and alert and action levels can be set for results outside of set acceptable thresholds 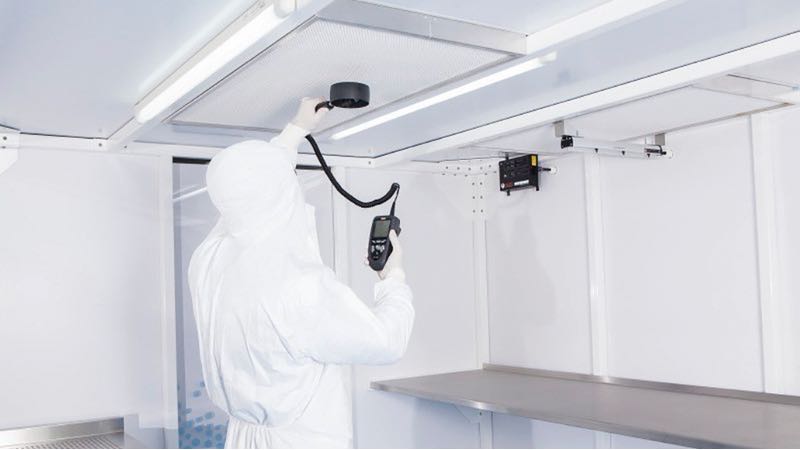 Contamination within a cleanroom is caused by the non-intentional or accidental introduction of viable or non-viable particulates. Whether an organisations' primary concern is controlling micro-organisms for regulatory and safety requirements, or physical contamination for yield and quality control reasons, third-party validation testing is employed to provide certification of a cleanroom's performance for regulatory purposes.

Supplementing cleanroom validation with in- house testing as part of a defined monitoring programme, will give greater visibility on a cleanroom's performance. Monitoring results can be used for trend analysis by comparing data with subsequent air samples, and alert and

action levels can be set for results that vary outside what has been deemed to be an acceptable threshold. Monitoring can be achieved through in-house testing using scheduled or fixed monitoring.

Historically, many organisations would rely solely on the annual or bi-annual validation test to verify if a cleanroom was working within the limits defined by its ISO Class set out in ISO 14644-1:2015. These organisations would then have no evidence that they were still compliant from that day until the next test in 6-12 months' time.

As validations are often performed at-rest, they would also have no evidence of compliancy when in an operational state.

Continuous or scheduled in-house environmental monitoring can bridge that gap, providing evidence of cleanroom performance related to air cleanliness by particle concentration, in between the third-party validation testing.

To provide evidence that the required level of cleanliness is being achieved, organisations may take periodic particle counts at critical control points. These regular intervals could be every minute, hour, day, or at set times during the batch.

With a handheld particle counter, organisations can mirror the locations that are set out in their monitoring plan to be used for the cleanroom validation test. These locations will have been justified and identified by three dimensions to be most effective for sampling.

Historically, many would rely solely on the annual or bi-annual validation test

To gather even more data on performance, organisations can use continuous monitoring with a remote particle sensor located next to the critical point of production, near product pass through portals, entrances from anti-rooms and in gowning areas. This provides evidence on the exact cleanliness specification throughout the entire lifecycle of that facility and helps to identify trends due to changes in materials or non-adherence to set policies or practices for the cleanroom.

How to manage monitoring data

With portable particle counting, the collection and analysis of the data is key for risk mitigation and limiting of an organisation's liability. Maintaining copies of the initial data files and technician's notes is important in order to adhere to GMP+ practices.

While most instruments offered by Connect 2 Cleanrooms include large sample data storage onboard, this data must be archived for later defensible reference as needed. Fixed installed continuous monitoring systems usually employ sufficiently large data storage hardware to accommodate access and archiving of all particle count data being collected by the system. Proper backup protocols should also be employed to ensure the data remains accessible even in the event of a system or hardware failure.

To improve product safety, many industries now stipulate that they need a high level of audit traceability data. To support this, C2C's control and monitoring system has been developed to simplify all aspects of cleanroom management. The ECO cleanroom control system gives real- time visibility on a cleanroom's performance by monitoring pressure differentials, temperature, relative humidity, particle counts and other requirements.

Handheld particle counters can also be used for spot monitoring

Continuous monitoring is provided through remote sensors that are located in the critical points of operation and the system is set up to alarm if any monitored parameters vary outside of a user-specified threshold. This enables set limits to be continuously monitored and flagged if there is an excursion.

Handheld particle counters can also be used for spot monitoring. If a broken seal or perforated filter is allowing contamination to be introduced into a cleanroom, the units help users to pinpoint contamination sources. Particles Plus units use a Real-Time Meter, displaying a visual real-time graph with selectable sensitivity adjustment showing peaks of particle counts.

Testing for broken seals is a critical action during the current pandemic and a step that Tim Sandle recommends in his article, 'Review of the efficacy of HEPA filtered air to control coronavirus risks in cleanrooms'. Sandle says: "One area of potential weakness relates to any gaps in the edges of filters which could result in a failure to remove pathogens from the shared air environment; such weaknesses should be detectable through properly executed HEPA filter integrity testing." Filter integrity testing, also known as Dispersed Oil Particulate (DOP) testing, is the process in which the integrity of your HEPA or ULPA filter is challenged through introducing particulates and measuring the output. It can be included as part of your validation testing schedule to identify any weaknesses in a filtration system.