AMC: an emerging class of contamination

Airborne particles are often regarded as the number one contamination source in cleanrooms and controlled production environments, but some trace gases are undesirable for several industrial requirements and processes and are therefore defined as airborne molecular contamination. This kind of contamination is becoming steadily more important in critical cleanroom manufacturing processes.

It can be argued that the most important issue confronted by a pharmaceutical manufacturer is to ensure that products are not cross-contaminated. Cross-contamination will have an impact on the bottom line, as potentially expensive materials must be consigned to waste. Regulatory agencies will take action against the firm if contamination issues are not fully investigated and corrected. Most critically, if undetected, patient safety is put in jeopardy.

When considering cleanrooms and controlled production environments, airborne particles are often regarded as the number one contamination source. Historically, particles were the first recognised contamination risk carried through the air that had to be controlled. Friction between materials and the process of burning carry the major risk of generating particles that are passed to the ambient medium, air.

Air convection, sedimentation, electrostatic or magnetic effects and thermophoresis all cause the transport of particles through the medium of air. These driving forces may carry the particles to places where they endanger the process or can cause product failure. For example, false exposure during lithographic processes in wafer processing in the semiconductor industry, or an overheating ball bearing caused by a corundum particle (from an Al2O3 abrasive) in the bearing brass, are two of several damaging scenarios that could be listed as caused by particles.

With appropriate air filtration and air guiding, it is possible to create an environment with not only a reduced number of particles but also with particles of reduced size. The classification of cleanrooms based on defined concentration levels of airborne particles is internationally known and defined within the guideline ISO 14644-1.1

With appropriate air filtration and air guiding, it is possible to create an environment with not only a reduced number of particles but also with particles of reduced size

Fungal spores and bacteria form another type of air-transported contaminant that must be removed from the environment for sterile pharmaceutical production processes. Fungi use the medium of air for spreading spores directly. Bacteria in the air, which are mainly attached to particles,2 are able to proliferate very quickly and cause severe ill-health and commercial damage if they come into contact with a surface that has the suitable nutrition, temperature and moisture conditions for their replication (e.g. wounds, food, respiratory systems, some plastics, etc).

For this reason, the ventilation technology within operating rooms in modern hospitals resembles that in cleanrooms. The various classifications for operating rooms are defined, for example, in the German guideline DIN 1946-4.3 The sterile production of pharmaceuticals also takes place in a pure environment. Different national GMP guidelines give information about the limits of particles or micro-organisms within the various GMP-areas.4,5

Molecular contamination: What about looking at the medium of air as a gas mixture itself? In our environment, normal ambient air consists of 78% nitrogen, 21% oxygen, 0.9% argon and 0.035% of the greenhouse gas carbon dioxide. Water vapour is greenhouse active as well, but its concentration changes due to prevailing weather conditions. The average value is 1.3% by volume at ground level.

Furthermore, air contains noble gases and other kinds of trace gases, e.g. methane, hydrogen, nitrogen oxides, ozone, volatile organic compounds (VOC) and many more. Because of the concentration range of the trace gases, they are not named in percent by volume but in ppbV (parts per billion by volume) or pptV (parts per trillion by volume). Urban ambient atmosphere, for example, contains between 10 and 100 ppbV VOC on average.

Some trace gases are undesirable for several industrial processes and are therefore defined as airborne molecular contamination. This kind of contamination is becoming steadily more important in critical cleanroom manufacturing processes

Some trace gases are undesirable for several industrial requirements and processes and are therefore defined as airborne molecular contamination (AMC). This kind of contamination is becoming steadily more important in critical cleanroom manufacturing processes. One reason for this is the increase in the so-called Sick Building Syndrome, reported by people working in public and private buildings. Those affected suffer from patterns of migraine or asthma attacks, which initially cannot be ascribed to a defined cause within the person’s surroundings. After measurements, an increased amount of VOCs in the environment often demonstrates the possible cause for the described symptoms.6

On the other hand, the requirements of cleanliness levels for the semiconductor industry increase because of the steadily decreasing pitch widths processed on the wafers. An increasing problem of contamination is the “time dependent haze”, which occurs in lithographic processes. AMC in the air can condense on wafer surfaces and build up crystals that create defects during chip production.7 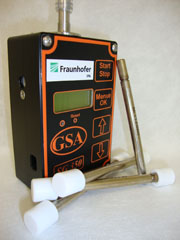 To eliminate the damaging effects of AMC during production within cleanrooms, internal AMC limits are set by several companies. Therefore, a suitable AMC-reduced environment for production is required. The guideline ISO 14644-8 defines the classification of cleanrooms in terms of the pollution caused by AMC.8 The classes are specified by the decadic logarithm of concentration in gram per cubic meter for each defined group of contaminants, e.g. ISO-AMC = – 7.8 (VOC) for the contaminant group of volatile organic compounds.

Most current cleanrooms solely reduce particulate contamination as defined in the guideline ISO 14644-1. Using ventilation applications and air conditioning with pre- and terminal microfiltration based on glass fibre mat filters or PTFE-filters, it is possible to achieve the best-defined cleanroom classification ISO 1, or even better. Laminar airflow prevents any cross-contamination from the dispersed particles or germs. However, these controlled environments with extreme reductions in airborne particulate contamination often disregard the gaseous compounds that can contaminate the air. In other words, if the newly-constructed cleanroom with its excellent filtration system for removing particles is located near a composting works, the area is most likely to be clean only with regard to particles.

Compared with the classical kind of controlled environments, which are able to filter out and reduce the number of particles, cleanrooms with a reduced AMC level are a lot more complex in development and operation. First, the user needs to define and classify the airborne molecular contaminant that has to be controlled. Is it a VOC, hydrochloric acid or hydrogen sulfide? Every class of gaseous molecular compound requires an adapted filtration technique, which should be applied to the incoming-air channel and the circulating-air channel of the HVAC system.

The quality of the incoming fresh air is extremely important as a basis for VOC-reduced cleanrooms. Therefore the location of a cleanroom needs to be considered during the early conception stage: What is the predominant direction of the fresh air? Are there any critical plumes caused by traffic or industry? Where is the best place in the building to install the incoming-air channel?

The revised reprint “Reinraumtechnik” (in German), gives further information on this point, especially the chapters about special sources of contamination.9

Material selection: For energy-saving reasons, the amount of fresh incoming air, which has to be tempered, moistened and or demisted, needs to be as small as possible. Consequently, most of the AMC/VOC sources that need to be controlled come from the HVAC system and the materials used in the cleanroom.

Attention needs to be drawn to the following components:

These components are usually attributed to just a few classes of materials:

If the choice of material is made based on the VOC-emission of the product, the resulting VOC-pollution within the cleanroom will be smaller. This leads to an increased lifetime of the VOC filtration systems, which all have a limited capacity. Whether they have to be renewed after half a year or two years, this is a monetary factor. In the long-term, it is beneficial to reduce the whole VOC emission from materials instead of using expensive techniques for VOC-filtration.

A standardised method for the measurement and classification of materials with regard to their VOC-outgasing characteristics is described in previous literature and in the new guideline VDI 2083 part 17 (draft).10,11 A representative material sample is placed into a micro chamber following a defined pre-conditioning time. The outgassing VOC substances are collected onto sorbent tubes, which can then be used for a quantitative and qualitative determination of the mass of all emitted VOCs.12,13

After calculating the surface specific emission rate of the material (SERa), this value is converted into a standardised classification number of the material. This number enables the comparison between different materials with regard to their VOC-outgasing behaviour. An overview of the different material classifications can be viewed under the category “outgassing” at www.cleanmanufacturing.fraunhofer.de

In addition to VOC outgasing determination, it is possible to determine the outgasing of ionic reactive compounds (e.g. hydrochloric acid, amines or ammonia) by bubbling the gas through ultra clean water and then analysing the water using ion chromatography.

Depending on the sampling and measurement strategies, more compounds and compound classes can be analysed. All sampling strategies are based on material emission in micro chambers and the collection of the outgasing products on specific absorbers (organic compounds, polymers, ultra clean water, acids, bases, charcoal, Tenax, Chromosorb, etc).

The ISO-AMC classification of cleanrooms according to ISO 14644-8 requires two steps: First, all the compounds and compound classes that will be measured need to be determined. Then they are collected on a suitable absorber. Following that, the collected compound or compound class is quantified. The sampled mass of the considered compound or compound class will be related to the sampled air volume. The obtained concentration is logarithmically turned in a decadal manner to the ISO-AMC value for classification (see table 1).

If a classification for VOCs, as described in ISO 14644-8, has to be carried out, Tenax TA can be used as appropriate adsorbent placed in passivated stainless steel tubes. Portable sampling pumps draw a measured amount of the cleanroom air through the absorber. The analysis of the adsorber is then carried out using thermodesorption gas chromatography coupled with mass spectroscopy (TD-GC/MS) (Figure 3). 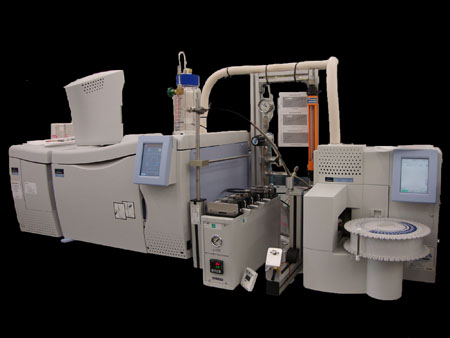 For example, the system determines the total mass of VOC is 10µg. If the analysed volume of air was 10 litres, then the classification after ISO14644-8 would be ISO-AMC class (VOC)-3 as a realistic value for non-VOC filtered cleanrooms in an urban industrial environment.

These cleanroom qualification measure-ments and the determination of the material outgassing classes are just part of the services provided by Fraunhofer IPA, based in Stuttgart, Germany.