Why do dogs need compounded medications?

There are a lot of reasons your pup might need a compounded medication over a traditional prescription... 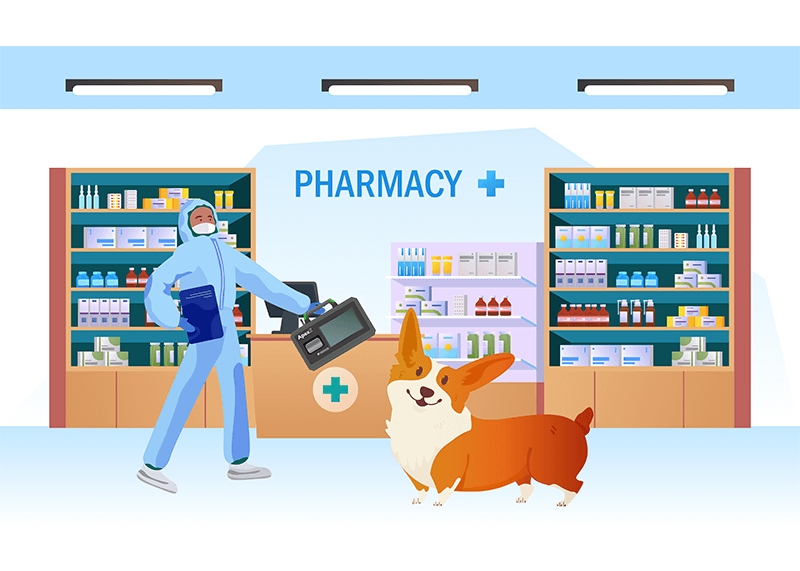 Our furry family members sometimes go down for the count and need some medication to help pick them up. But what happens when they won’t take a pill? Or need specialised medication? Or have to take multiple medications? The answer for you and your pet might be compounded drugs!

Compounded medications are prescribed by your vet and essentially manipulated beyond the medications originally prescribed scope. This could mean combining more than one medication into a single capsule or syringe, turning a capsule into a liquid, adding flavour to a bad tasting drug to make it more palatable, and changing the dosage rate.

When would a dog require compounded medication?

There are a lot of reasons your pup might need a compounded medication over a traditional prescription! This is especially true if there are no FDA-approved human or veterinary products currently available or appropriate for treatment. Compounded drugs can make administration significantly easier. For example, if a dog needs a pill but simply will not take it, a compounding pharmacist can turn it into a liquid in a syringe, which could be easier to get the dog to take. In another situation, if your dog needs multiple medications but does not take drugs easily, it might be beneficial to have multiple drugs compounded into one form.

Due to the nature of the medication, this decision should only be made with your veterinarian who is familiar with your dog’s condition. Your veterinarian should understand the associated risks with compounded drugs and make the decision about whether or not it is better to go untreated. But more on those risks in a minute.

Are compounded medications different from the ones you get from a community or vet pharmacy?

The medications you normally get from your community or veterinarian pharmacy are in their FDA-approved dosages and forms. Pharmacists are only allowed to compound medications as modified versions of these FDA-approved drugs. Whether by crushing, adding flavour, or otherwise modifying the drug, there are limited ways they can modify the drugs within the federal regulations. For example, they cannot add ingredients that are not FDA approved for animals or humans. This would be considered a “new animal drug,” which would have to go through FDA approval to be sold and administered.

In situations where a veterinarian determines it necessary to use something that has yet to be approved by the FDA, the veterinarian and the pharmacist need to work together to determine if the medication is consistent with state and federal law, as well as FDA policy.

What are the most commonly compounded drugs for pets?

Most commonly, you will find veterinarians mixing two injectable medications, crushing tablets to make an oral paste, or adding flavours to a bad-tasting drug. Often, you will find a couple methods combined. For example, they might suggest crushing a tablet into a paste and adding flavouring so your pup is more likely to take it. (While this might sound like something you can do at home, just remember that changing a medication from its FDA approved form can impact potency and efficacy, so it should only be done by professionals for the desired outcomes to be achieved.)

Drugs that are frequently compounded using these methods include:

These are often compounded and medically necessary, but actually are legal compounds according to the FDA’s definitions. That is because an FDA-approved drug is not the base starting ingredient and a raw chemical must be used.

Are there risks with using compounded medication?

Compounded medications are not administered in their FDA-approved form. They have not gone through the same testing for safety and efficacy as their counterparts. While this does not mean that the drugs will harm your pet, it could mean they might be less effective. Many times, if a veterinarian suggests a compounded medication, it means they have valid reason to believe it will be effective in the suggested form. But, in general, if you can use an FDA-approved drug, you should.

It is also worth noting that pharmacies are not allowed to compound drugs identical to their FDA approved version for whatever reason, including price or resale.

While compounding drugs does propose some risks, it is a regulated industry! Both the Food and Drug Administration (FDA) and state governments offer regulations for compounding medications for pets, as well as humans.

The United States Pharmacopeial (USP) also has guidelines for compounding pharmacies. While the USP standards do not require proof of efficacy or safety of the drugs themselves, they do have guidelines for pharmacies to follow related to safe manufacturing. This includes operating in a clean, controlled environment!

That’s where we enter the picture. As the world’s clean air experts for over 40 years, we can help you understand and meet the regulatory requirements of operating a compounding pharmacy.