Have you ever heard the old wives’ tale that if you water your garden at night, mushrooms will grow by morning? While there’s some truth to this timing, because mushrooms grow when there’s a certain moisture content and the night prevents water from evaporating at the same rate, there is a deeper, hidden, much more sinister truth: fungi can grow massive amounts in just a few hours 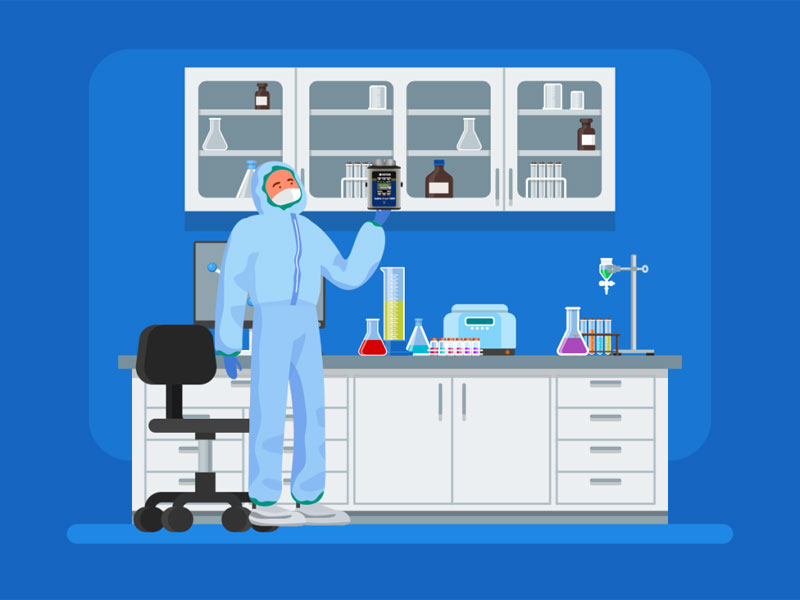 Fungi can start as a microscopic cell and quickly grow to cause a lot of damage if growth occurs in a septic area, like a cleanroom. That is one reason why it is so important to monitor for viable contamination – and eliminate it as quickly as possible.

Viable particles can grow and change, which can wreak havoc in a cleanroom. A prime example is the fungus outbreak in a NASA cleanroom in 2018. Throughout the room, they found a shocking number of mold spores, but on a filter that had not been properly maintained, they discovered more than 28 viable cells per passport-sized sample.

This discovery was deeply concerning because the mold spores could have potentially caused damage to extraterrestrial samples stored in the cleanroom. Some scientists had to reconsider or even scrap years of work for fear of findings having actually been contaminated.

Viable contamination is no joke, although all contamination poses a risk to cleanrooms. The difference, though, is the ability to grow. So how do you tell the difference between viable and nonviable particles?

A traditional remote or portable particle counter will tell you how many particles are present and their size, but they won’t be able to differentiate between viable and nonviable particles. To figure out which type of contamination you are dealing with, you’ll need an active air sampler.

There are two common types of air samplers: portable and continuous air samplers. These are similar to portable and remote particle counters. They both have their benefits and are suited for different purposes. For example, portable air samplers are best used for routine testing and certification based on 1,000 liters of sampled air. Continuous monitoring is a GMP requirement and best used in cleanrooms where there is constant consideration of viable contamination. While remote air samplers can be used for continuous monitoring, the samplers designed for that purpose often have more benefits for it.

Either way, active air samplers are considered to give a snapshot picture of what is happening in a cleanroom at any given moment because of the way they operate. 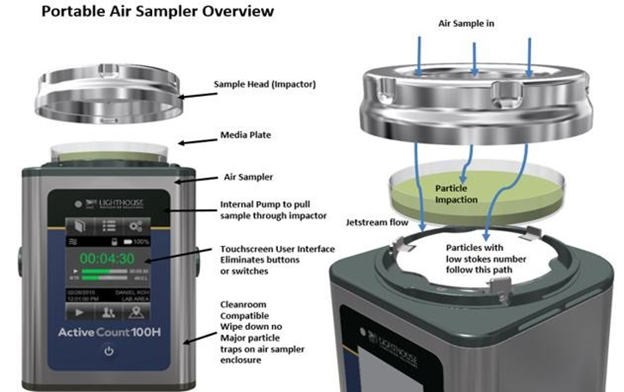 The Anatomy & Function Of An Active Air Sampler

An active air sampler has a head that contains the sample head (or impactor), which covers the media plate. The body of the air sampler is made up of the internal pump that pulls the air in.

After the air sampler pulls in the sample of air, it allows the particles to settle on the media plate. This contains a special media which will react to the particles and determine what type of contamination they are. The particles might take a while to settle, so at any given moment, the active air sampler offers just a snapshot of what is happening in the room based on a sample volume of 1,000 liters of air. This is the standard volume for regulatory monitoring.

The d50 is the point where 50% of particles, determined by size, will be pulled away and 50% will impact on the media. This is a critical component of the air sampler, because it determines what size of particles your air sampler is able to detect. You need a d50 that corresponds with your regulatory requirements.

How To Choose An Active Air Sampler

An air sampler can be the difference between a solid cleanroom and growing mushrooms overnight. It is a fundamental tool for your cleanroom. To choose the right one for you, we recommend a few things:

Here at Lighthouse Worldwide Solutions, we’ve been the world’s clean air experts for over 40 years and we set the standard for air samplers. Our ActiveCount100H was designed with usability and accuracy at the forefront of our process.

It’s a tool meant to work hard so you don’t have to: built-in ISO 14698-1 compliance, 8 programmable sample volumes, removable autoclavable sample petri dish, and more. Learn about the ActiveCount100H today.