ESA unveils microbial wipe down at the International Space Station 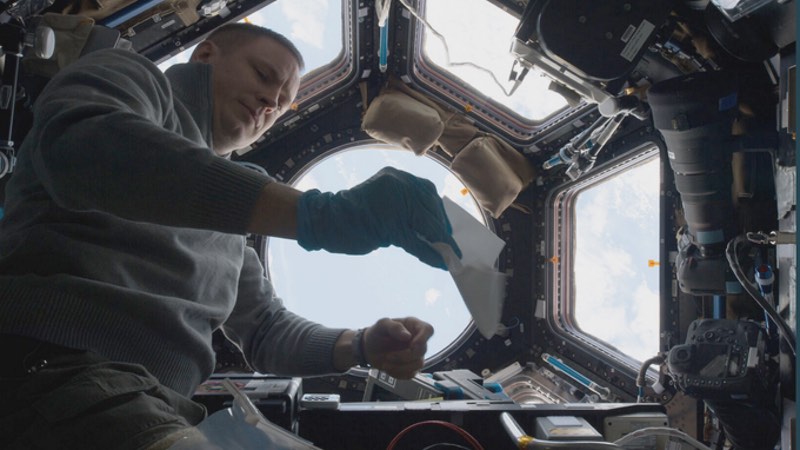 The European Space Agency (ESA) has released a photograph of NASA astronaut Jack Fisher using a wet wipe on the surfaces of the European Cupola module of the International Space Station (ISS), noting that “sometimes doing science is as simple as wiping up”.

Doubling as both station maintenance and science experiment, Fisher collected microbes living on the surfaces of his orbital home for ESA’s Extremophiles experiment.

Headed by Dr Christine-Moissl Eichinger from the Medical University of Graz, Austria, the experiment studies how microbes settle into the harsh environment of space.

Cosmic radiation exposes not only humans but also bacteria, fungi, and other microorganisms to cellular stress. A typical stay in microgravity for an astronaut weakens the immune system and causes more health issues, prompting researchers to ask whether the same was happening to microbiomes or the organisms found in a particular environment and whether they resist treatment, becoming “superbugs”.

Researchers tested these against microbes found in a similar environment on Earth: spacecraft cleanrooms

Because the ISS is a closed environment, microbes can only arrive with new crew and cargo. The station has accumulated a core group of 55 microbes over 20 years of continuous human inhabitants.

Researchers tested these against microbes found in a similar environment on Earth: spacecraft cleanrooms. They found that space-based microbes did not have a higher resistance and were not more stressed than Earth-based ones.

In short, microbes are no more extremophilic – able to survive in uninhabitable environments – in the weightless and radiative environment of space.

The results were recently published in a paper in Nature Communications. Interestingly, researchers found that space-based microbiomes can react negatively to metal surfaces, especially when those surfaces are wet. As they struggle to adapt to their environment, they attack the metal surfaces they find themselves on by corroding them or creating biofilm.

Researchers and crew are monitoring the situation by keeping metal surfaces dry and easily accessible for regular cleaning and sampling. After all, there is no getting rid of microbes or any need to. They are a fact of human life.