ESA puts out call for innovation to industry 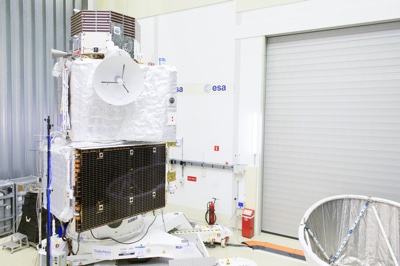 Thousands of new jobs and boosted local economies are the direct results from ESA's investment in young companies through its business incubation centres, which have now hosted more than 500 start-ups.

From healthcare to manufacturing, sport to agriculture, the centres are an important driver for entrepreneurship and the creation of new businesses, as well as positioning Europe at the forefront of innovation.

A prototype personal 'flying car' in the form of an electric jet eventually taking off and landing vertically from our own backyards has been developed by entrepreneurs at the Bavarian incubator. A start-up in Darmstadt, Germany, has developed a location-based digital address system, making it possible to locate and delivery goods to remote locations in Africa where no address system yet exists.

In the health sector, an idea from a German start-up is revolutionising the treatment of bacterial infection in wounds by applying 'cold plasma' stemming from experiments on the International Space Station.

Thanks to a UK start-up, women can now receive the results of their breast cancer screening in just 24 hours, instead of the typical two weeks. In Portugal, a smart drone delivers hot meals to isolated inhabitants, as well as flying parcels over Lisbon's rush-hour traffic.

A crowdsourcing online game invented by a Dutch start-up brought together 1200 players to map the disaster-stricken area in the Philippines after typhoon Haiyan in 2013, showing cut-off roads and broken bridges, and guiding emergency teams to viable routes.

"To support growth across Europe, we make our knowledge and technology available to be used outside of the space sector," said Jan Woerner, ESA Director General. "To this end, we set up Business Incubation Centres to help young entrepreneurs and start-ups create innovative services by the use of satellite services and space technology.

"Our centres have now helped to set up more than 500 new companies in Europe, creating many high-tech jobs and competitive solutions that have boosted regional economies."

Innovations for all sectors

"We started our ESA Business Incubation Centre (BIC) initiative in 2003 as part of our Technology Transfer Programme to facilitate innovative entrepreneurship and to create new European companies by spinning off our investments in space programmes," said Franco Ongaro, ESA Director of Technology, Engineering and Quality.

"Entrepreneurs, start-ups and small companies come with their own great ideas. In the business incubators we then support them with technical advice from ESA and our technical partners, and business advice from our commercial partners to get going and create viable new companies in Europe.

"We also work to find ways to bridge the maturity gap between the creative ideas and realistic business plans for the development of successful companies."

Start-ups earlier focused on adapting advanced technologies developed for space missions, whereas nowadays two thirds of ESA BIC companies use satellite signals and data, often combining them with the latest technology from other fields like smartphones and drones.

Earth observation applications are also on the rise, as navigation systems become less dominant. Start-ups have developed ideas to help farmers reduce their costs in precision farming, optimise yield and cut down on the use of fertilisers.

Through initiatives with national partners, ESA's Technology Transfer Programme encourages students — both technical as well as business — young entrepreneurs and inventors to turn their ideas into new European businesses.

ActInSpace brings together entrepreneurs and students to find ideas for space in terrestrial business areas and, collaborating with business schools such as the Global Alliance for Management Education, seminars are organised around the commercialisation of space technology.

"At our ESA BICs, we are ready to take risks to help young entrepreneurs with daring ideas and forward-thinking innovations by bringing space down to Earth," said Frank M. Salzgeber, head of ESA Technology Transfer Programme.

"Daring ideas are often the ones that bring big changes and improvements to our society, and with this spirit, we also invest in those often less-traditional ideas.

"We have invested Euro30 million since 2006 and join forces with national partners and funders to boost the spin-off from European space programmes to create new businesses and growth in Europe."

Space 4.0 — the evolution of the space sector into a new era — will have an effect on how to spin off space to other sectors, with ESA continuously supporting the interaction between governments, private sector, society and politics via its local business incubation centres.

"These space solutions and their spin-off are creating new companies with high-tech jobs, strengthening the European economy and our worldwide competitiveness," stressed Jan Woerner. "More than that, these new technologies also help us to protect Earth and develop a sustainable future for the next generation."

The Technology Transfer Programme Office is strengthening European industry and improving our lives by reusing space technology developments and satellite data in terrestrial applications and sectors. The transfer is reinforced by a Europe-wide network of national technology brokers and a network of ESA Business Incubation Centres.

Started in 2003, the incubation network will grow to 18 centres by the end of 2017, in the Netherlands, Germany, Italy, UK, Belgium, France, Spain, Portugal, Sweden, Czech Republic, Ireland, Switzerland and Austria, and with Estonia and Finland to open later this year. Several more are under preparation.

By mid-2017 the incubators had fostered more than 500 new start-ups creating high-tech jobs throughout Europe, with 140 new start-ups being added each year.

They inspire and support entrepreneurs to turn space-connected business ideas into commercial companies, based on spin-off to terrestrial applications from space technology, satellite services and ESA intellectual properties. Typically hosted for two years, the start-ups are provided with technical expertise, business-development support, seed capital and access to business networks.