Contamination: The challenge to isolate, characterise, and identify the diminishingly small

Physical contamination is impossible to completely remove, but appropriate controls can get you as close as possible. David Wright from RSSL discusses 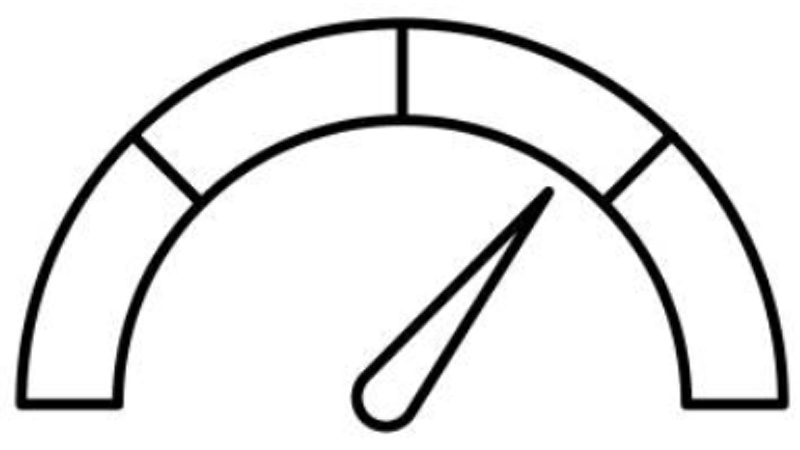 Despite advances in cleanroom technology, it is impossible to completely exclude all contaminants from a production line or product. With appropriate controls and preventive measures, fortunately, most of the time it is possible to keep the levels of physical contaminants at acceptably low levels.

When contamination is discovered it is vital to quickly determine its composition and characteristics. This is essential in evaluating whether the contaminant is harmful as part of a risk assessment, which may dictate that a batch must be scrapped, or a product be recalled. It is also the primary step in identifying the source of contamination and the root cause of any contamination incident, so that measures can be put in place to prevent re-occurrence.

Contamination can occur at any stage of production. It can be introduced with any of the raw materials or ingredients or with packaging, cleaning products and even at the point of use or consumption.

In some instances, the PPE and equipment designed to limit contamination can itself be a source of contamination. Characterising not only a contaminant but also deposits or inclusions may indicate the point of entry of any foreign object.

The tools and techniques chosen for identification of an unknown object or multiple particles depend on the nature, size of the physical contaminant/s, and how sparsely they are dispersed. It is best first to assess the appearance of any contaminant using light microscopy (LM). This will in most instances give a good indication of what an unknown material is likely to be and enables the experienced analyst to decide which combination of more sophisticated spectroscopic and microscopy techniques may best determine the composition and structure of the contaminant.

Techniques such as Energy dispersive X-ray analysis (EDX) or X-ray fluorescence (XRF) can be used to elementally profile materials and for contaminants such as metals, ceramics, glass or inorganic salts, the elemental profile is often sufficient for identification.

EDX is used in conjunction with scanning electron microscopy (SEM) or transmission electron microscopy (TEM) in the case of the smallest nanoparticles, providing morphological information. A particularly useful mode of imaging inside the SEM is back-scattered electron (BSE) imaging which contrasts according to atomic mass, highlighting higher atomic mass material as bright objects, enabling the analyst to quickly locate the smallest of contaminant particles from the product and profile them using EDX. EDX does not provide chemical information for organic materials such as plastics and only shows them to be organic by detecting the presence of carbon.

An analyst must resort to vibrational spectroscopies to obtain chemical information from both organic materials and chemical compounds. With these spectroscopies, a sample is excited by light with wavelengths that interact with its chemical groups that comprise molecules to produce a characteristic spectra.

Fourier Transform Infrared (FT-IR) spectroscopy is perhaps the most commonly used of these vibrational spectroscopies. It can be used in conjunction with light microscopy in both reflection and transmission but it can also be used in a contact mode where a probe is compressed into a sample.This is attenuated total internal reflection (ATR). Raman spectroscopy, complementary to FT-IR can also be used in conjunction with light microscopy but has the added advantage that it uses monochromatic laser sources, as opposed to the broad spectra of FT-IR to excite a specimen. This laser source can be focused to a sub-micrometre ( <1x10-6 m) fine point in a confocal microscope which can excite a very small sample volume to obtain a spectrum from that point and thus obtain a spectrum that can help identify the smallest of contaminants and even spectra from a sample-dependent finite depth in transparent or translucent material. Confocal Raman is therefore a disruptive technology in the identification of cleanroom contamination! Figure 1 shows an example. 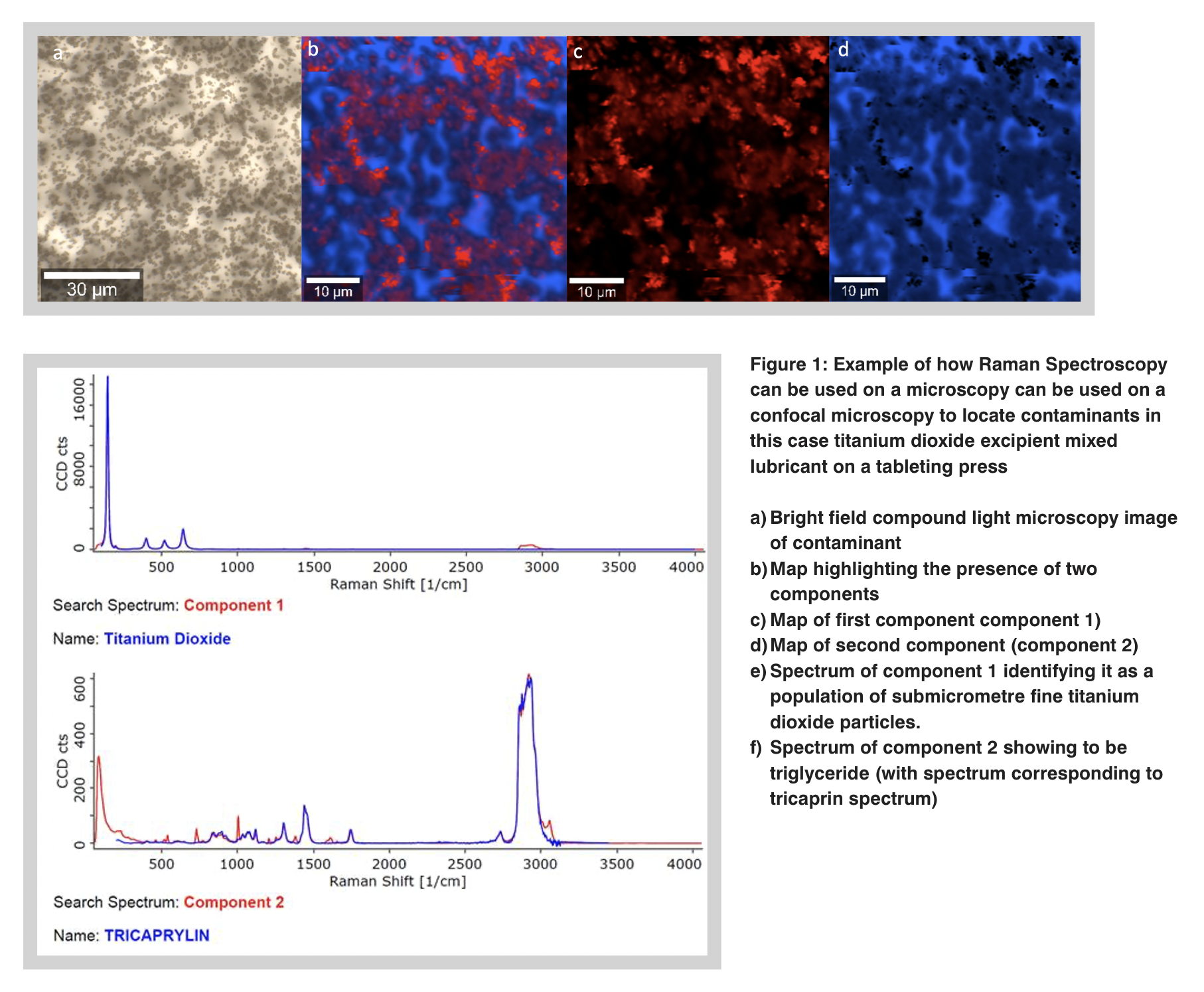 FT-IR and Raman techniques have, in the last decade, been adopted and popularised by environmental researchers to identify microplastics. The reason for this could not only be that they are useful techniques for identifying particles as small as a micrometre in the case of Raman, but the large number of spectra for comparison that are held on searchable databases gathered by forensic scientists with the aim of identifying contaminants and by the broader scientific community over many years.

Such databases need to be used intelligently and with caution when identifying physical contaminants. This is because, though some substances have distinct and unique vibrational spectra which provide immediate identification, other spectra are not so distinct and subtle spectral differences need to be expertly evaluated to distinguish one substance from another.

In many contamination investigations, morphological details derived from microscopy techniques must be combined to identify the likely source of a physical contaminant. Combining FT-IR with elemental analysis enables identification of carboxylic acids and their salts common intrinsic contaminants that form as a product degrades such as from exposure to heat. In the case of plastics, FT-IR may not distinguish one source of polyethene from another but EDX or XRF analysis may show different elemental profiles between samples.

This elemental profile might distinguish polyethene samples by the differences in inorganic particulate fillers. Figure 2 illustrates this. a topical and recurrent example of this where both EDX and FT-IR are applied to demonstrate that an unknown particle found in a vaccine vial is simply a fragment cored from the stopper by the injection syringe needle as opposed to anything introduced in the cleanroom where the vial was filled. 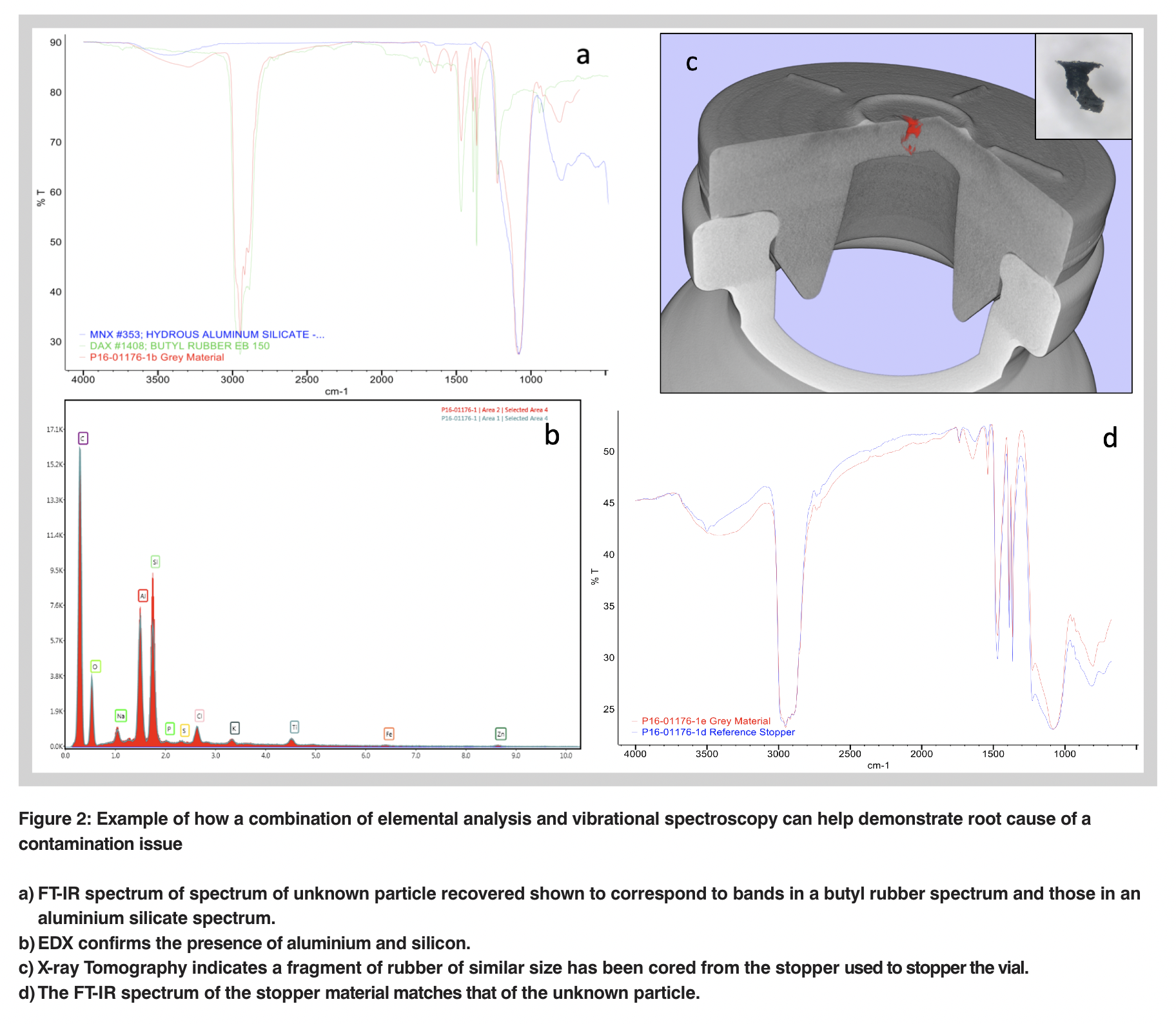 Improvements in microscopy instrumentation such as automation and advances in information technology such as digital image analysis mean that EDX, FT-IR and Raman are becoming increasingly powerful tools in contamination investigations when combined with microscopy.

Instead of identifying single particles isolated with great dexterity by the analysis under microscopy, mixed populations of unknown particles can be analysed in detail to provide statistical information on size, shape, and composition of each subpopulation. Particle scout software, which hunts for particles to analyse on optical and electron microscope stages is now increasingly used in conjunction with FT-IR, Raman and EDX spectrometers. "Machine Learning" applications are being developed for this type of software, to more accurately refine the selection of contaminants from a subpopulation. Such software has been used to characterise samples of mixed microplastics from the environment but is also being used to characterise samples from the manufacturing milieu.

Challenges, however, still exist with sample preparation. These include depositing material for analysis onto substrates such as filters without unintentionally introducing further contamination as well as dispersing material sparsely enough so that image analysis algorithms can distinguish between individual particles but not so sparsely that too few particles are analysed.

Extraction of the contaminant from the product and/or removal of product residue remains a significant problem. Method development is usually required to determine what solvents or procedures will remove a product without dissolving the contaminant. One solution is not to extract but to map in situ.

This can be done using either optical confocal or electron scanning in conjunction with one of the spectroscopy techniques. When this is done, every pixel in the map is represented by a spectrum. The user can then select features such as FT-IR or Raman bands or peaks from EDX or XRF spectra and generate subsidiary maps to highlight the presence of a particular component or substance.

Once highlighted statistical functionality within image analysis software can be used to characterise the size frequency distribution of a sub-population of identified particles.

Faster cheaper processing and greater data storage are continuing to be a game changer in tomography. Together with improvements in X-ray optics, this has resulted in X-ray microtomography or micro CT, which contrasts according to the density of a substance to X-rays, becoming an increasingly useful and used tool in forensic laboratories, with top of the range benchtop devices able to resolve features well below a micrometre. Ultimately this tool can non-destructively render the interior of solid objects and hence locate included contaminants in situ.

Increased automation and the ability to better determine the composition of a greater number of diminishingly small particles may have its downside dependent on your point of view. It is the expectation of the regulator, especially in pharmaceutical environment subject to GMP, that everything perceived as "reasonably practicable" is done to find the root cause of a contamination event and put measures in place to prevent re-occurrence. With the advent of such powerful tools described above, regulators' perception of what is reasonably practicable is continually changing and more analysis to characterise contamination more fully will be expected.