The ins and outs of microbial monitoring

Routines for microbial monitoring of ambient air, surfaces and personnel in critical areas need to be as straightforward and fail-safe as possible to yield reliable results. Disposables, such as settle plates, contact plates and swabs, should thus be filled in cleanrooms that meet high microbiological standards. For testing irregular surfaces such as equipment recesses, nooks, crevices, tubing and filling needles, where contact plates are impractical, pre-moistened swabs may be used to validate cleaning and sanitation procedures and to verify that a required hygiene level has been reached.

Microbial monitoring of ambient air, surfaces and personnel in critical areas is a significant risk and cost issue in pharmaceutical production. Contamination in cleanrooms or isolators can not only lead to the loss of an entire product batch but may also result in further time needed for corrective action to resolve the problem. In the worst case scenario products must be recalled, with reputational damage likely to follow.

The routines need to be as straightforward and fail-safe as possible to yield reliable results every time. While data on parameters such as temperature, relative humidity or air pressure differentials is relatively easy to collect, analyse and store using a computer- controlled cleanroom monitoring system, microbiological monitoring must be conducted separately because, due to its more complex nature, it cannot be sensibly integrated.

A key concern of decision-makers in pharmaceutical companies is that the instruments and disposables they purchase are validated according to established standards, in particular those of the FDA. For this reason, Merck Millipore fully validates its microbial and particle air monitoring instruments for all relevant markets the world over and, for its culture media disposables, performs studies to support the in-house validation that end-users need to conduct.

It is clear that what is intended for use in critical environments should be produced under at least equally controlled environmental conditions. Disposables, such as settle plates, contact plates and swabs, should thus be filled in cleanrooms that meet high microbiological standards. They are usually double or triple packaged, depending on the class of cleanroom for which they are intended. This allows the outermost bag to be removed on advancing into the next higher class of cleanroom. For class A (ISO 5) cleanrooms and isolators, transparent triple bagging is perfectly suited.

Because the final packaged product cannot be sterilised outright, it is gamma-irradiated. However, the irradiation dose must be finely tuned to ensure a contaminant-free product while also guaranteeing that the media does not degenerate to become impacted in its capacity to grow micro-organisms. In addition, the plastic packaging material must be qualified to withstand the irradiation dose without becoming easily damaged when handled or shedding particles that would compromise cleanroom safety. Merck Millipore has found doses of between 9 and 20kGy to provide the right balance.

Because aseptic filling is not a terminal sterilisation process, a Sterility Assurance Level (SAL) cannot be defined. However, the presence of supplier-introduced colonies on gamma-irradiated media is an extremely rare event. When contaminants are indeed encountered these are usually not viable. In 2011, Merck Millipore irradiated some 14 million contact and settle plates. None was found to be contaminated by viable micro-organisms as a consequence of the production process. Even so, as a precautionary measure, such culture media should be visually checked prior to usage.

For storage and use in isolators, the material of the innermost bag has to meet a further requirement: it must be impermeable to H2O2 vapour (HPV), thereby ensuring that this universally used bio-decontaminant will not inhibit microbial growth after sampling. To neutralise a certain amount of H2O2 that may accumulate on the culture media (e.g. as a consequence of active air sampling), Merck Millipore supplements all culture media designed for use in isolators. Another functional feature is an inner bag, which possesses a mechanism enabling it to be hung within an isolator, leaving no uncleanable surface underneath.

It is important that plates are stored upright and at roughly the temperature they will be used for sampling. Their shelf life (up to 9 months for Merck Millipore plates) is based on a storage temperature of approximately 20°C. Refrigeration is not advised: when stored in the cold, drops of condensation will form that may result in contaminations when these moist plates are handled. To be entirely sure that, even during transportation, the plates are kept at the right temperature, it is possible to call upon temperature-controlled shipment, something that Merck Millipore offers within Europe.

Passive air sampling generally involves the use of solid media settle plates. These usually contain Tryptic Soy Agar (TSA), a general-purpose medium, or Sabouraud Dextrose Agar (SDA), which is ideally suited to growing yeasts and moulds. The plates are placed at certain locations within the test area. After removal of their lids they are left to stand exposed to the air for a predetermined period of time. Following exposition, the plates are closed and incubated, whereupon any colonies found are counted and identified.

Over a typical 4-hour exposure period in a unidirectional airflow cabinet, TSA plates have been found to lose up to 16% of their original weight

A key issue with settle plates is that while exposed they lose water due to evaporation, leading to an increasingly dry skin on the agar surface. This in turn can lead to poor growth of certain microbes on the media and thus to an underestimation of the proportion of these organisms in the air. Over a typical 4-hour exposure period in a unidirectional airflow cabinet, TSA plates have been found to lose up to 16% of their original weight. However, when such plates were inoculated with typical contaminants and subsequently incubated, all recovery rates were above 70%.1

To enable prolonged exposure and incubation periods while ensuring that the plates still deliver reliable results, settle plates should be poured to a particularly high filling level. However, the maximum length of exposure must be validated for each production line, taking into consideration airflow, temperature, relative air humidity as well as turbulences.

Surface sampling helps to determine the presence of viable micro-organisms on surfaces in critical environments and on personnel. Typical surfaces that require such bioburden testing are laminar airflow workbenches, floors, gloved hands and difficult to reach areas, such as the interior of tubing or filling needles.

For sampling flat or convex surfaces contact plates are used. These 50mm diameter plates are filled so that the solid media, usually TSA or SDA, protrudes. The agar surface is pressed against the surface to be tested, and any media residues are subsequently removed from the sampling site. After incubation the number of resulting colonies is determined.

By coming into contact with test surfaces, contact plates may pick up residues of sanitising agents used for cleaning or disinfecting cleanrooms. These substances, of which hundreds are used in pharmaceutical facilities around the world, may inhibit the growth of contaminants taken up on the same plate. To counteract the growth-inhibiting properties of such sanitisers, so-called neutralisers are added to the culture media. Appropriate combinations of lecithin, polysorbate 80, histidine and sodium thiosulfate are believed to neutralise up to 80% of the sanitisers typically used. 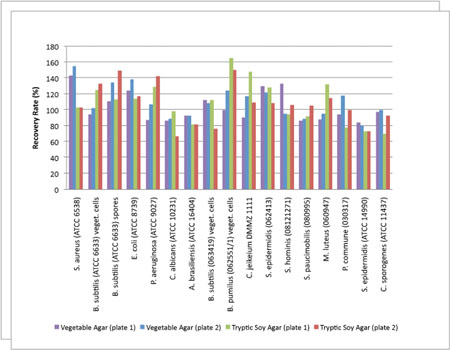 However, some of the remaining substances, such as polyhexamethylene biguanides, have proved very tricky. To cover a larger proportion of the sanitisers, Merck Millipore recently introduced a new neutralising mixture, designated Neutralizer A, in TSA contact plates. It has proved successful in neutralising all sanitisers tested so far, with recovery rates all above 50% compared with control plate counts.2

Because TSA contains animal ingredients that may possess the potential to transmit BSE/TSE, contact plate media containing no substances of animal origin have come into use. The growth promoting properties of such a solid vegetable contact medium were tested for various strains originating from culture collections (see Figure 1). The results indicate culturability roughly comparable to that of TSA.

Using material of non-animal origin, and thus free of BSE/TSE, has also become widespread in media fill trials, which are conducted at regular intervals to simulate the actual filling process as closely as possible using media in place of the pharmaceutical ingredients. Like animal-based peptone media, these vegetable media allow growth of a similarly broad range of micro-organisms. In quantitative tests of 20 Gram positive and eight Gram negative bacterial strains as well as eight fungal strains, the growth-promoting properties of vegetable peptone broth were found to be similar to those of Tryptic Soy Broth (TSB).3

For testing irregular surfaces such as equipment recesses, nooks, crevices, tubing and filling needles, where contact plates are impractical, pre-moistened swabs may be used to validate cleaning and sanitation procedures and to verify that a required hygiene level has been reached.

For maximum recovery, the swab is carefully removed from its tube and rubbed across a surface area using a twisting motion. Conventional swabs are then re-suspended in a specified amount of rinse solution and agitated to transfer any micro-organisms present on the swab head into the solution. The collection medium is then tested, usually by either direct plating or membrane filtration and incubation of filters on culture media.

A drawback of conventional swabs is that the recommended procedure involves a number of steps, each of which carries the potential for handling errors and thus adventitious contaminations

A drawback of conventional swabs is that the recommended procedure involves a number of steps, each of which carries the potential for handling errors and thus adventitious contaminations. To circumvent having to open the tube several times, an all-in-one swab system has been developed that requires opening only once because it already carries with it a reservoir containing the culture broth. After returning the swab to the tube, the reservoir at the top is snapped and squeezed until the broth fully saturates the swab head. After incubation the broth is monitored for turbidity as an indicator of contamination. This ICR swab is gamma-sterilised in its final packaging at a relatively high dose of 25–35kGy.

Despite this, both the moistened swab tip and the medium were shown to be non-inhibitory against challenges of eight microbial species that are more commonly isolated from aseptic processing environ-ments.4 This swab is also suited to use in isolators because it is triple-packaged, with the inner bag possessing a pre-punched hole for hanging up.

Microbial monitoring of critical pharmaceutical environments has been subject to a significant increase in regulatory require-ments in recent years, which, in its wake, has boosted growth in the supplier market. This has further increased the incentive for specialised, resourceful suppliers to work with pharmaceutical companies in assessing where new products are beneficial or where existing products can be improved. This trend is ongoing and likely to continue, making production processes and hence pharmaceutical products ever safer.