Strict rules apply over the limits for metal contamination in pharmaceuticals, and the challenge is to find a reliable way of quantifying how much is present. Alan Cross, RSSL, reviews some of the procedures used for metals analysis

After several years of proposals and discussion, the US Pharmacopoeia is closing in on implementation of new procedures for analysis of elemental impurities in pharmaceutical products. While there is no doubt that the methods detailed in Chapters <232> and <233> are more precise and accurate than those of the existing Chapter <231>, there have been concerns expressed by manufacturers that have held up implementation of the changes.

In June 2013, two working groups of the USP Elemental Impurities Implementation Advisory Group convened to discuss the challenges manufacturers will face in implementing the standards, and to evaluate issues for manufacturers whose products are especially affected by the elemental impurities standards. At the time of going to press, the resulting proposals were to be reviewed by the Expert Committee in October 2013 and as a result the date for mandatory introduction has now been pushed back to 2015.

While manufacturers may have concerns over implementation, from an analytical perspective, and indeed from the perspective of patient safety, it is clear that the methods detailed in the current Chapter <231> are in need of updating.

The need to test for heavy metals is actually one of the most established ideas contained within the national pharmacopoeias, albeit that its origin has more to do with the prevention of mislabelling than the prevention of contamination. The USP has included a general test for heavy metals since volume VIII of 1905, which used sulphide precipitation to detect antimony, arsenic, cadmium, copper, iron, lead and zinc, since heavy metal salts were often used in ‘therapy’.

The detection of residual contamination came in 1942 with the introduction of volume XII, in which a lead-containing standard was included in the test. The aim was to detect heavy metal residuals, such as lead and copper. Metals like iron, chromium and nickel were not revealed by the test,1 and ultimately, it is the inapplicability of a ‘standard’ test (such as that defined by Chapter <231>) that has led to its demise and the need for more flexibility.

It is well known that some metals can represent a direct danger to health, but metal impurities may also accelerate degradation of pharmaceutical products, especially biopharmaceuticals. Hence there is a double incentive to ensure that contaminants are kept out of pharmaceuticals where possible, and detected if present.

Of course, contamination can occur for a number of reasons. Many inorganic impurities are deliberately added to the process as catalysts. Others occur as undetected contaminants in starting materials or reagents, or come from the process, e.g. leaching from pipes and other equipment. Then, of course, there are metal ions that occur naturally within the plant or mineral sources that are used to produce the active ingredients of pharmaceuticals and herbal medicines.

The methods of Chapter<231> were developed long before the introduction of modern analytical instruments, and their technical simplicity does at least mean that they are easily transferable from one laboratory to another. However, there is a fundamental problem: the methods themselves are flawed, no matter how competent the analyst.

For example, the method detailed in Chapter<231> uses a colour change reaction arising from the formation of the metal sulphide, and comparison of the resultant test solution against a lead standard. The validity of this comparison relies on several questionable assumptions. For example, the method in Chapter <231> assumes that all heavy metals react in a like manner to lead. However, many metal sulphides are known to be insoluble and some are known to have a far more intense colour than the lead standard against which it was being assessed. Similarly, the compendial method assumes that the reaction kinetics for lead sulphide are very similar to that for the other metal sulphides and that reaction kinetics are not greatly affected by the sample matrix.

The methods themselves are flawed, no matter how competent the analyst

A final major and unsafe assumption is that the heating and/or ashing step of the method will have no impact on volatile metals.2 There is published evidence that recovery of mercury could be as little as 2% using the compendial method. Other labs have reported similarly poor recovery of metals such as tin, selenium and antimony.

As a consequence of these challenges to the validity, applicability and reliability of the compendial methods, other chapters for the control of specific metals and inorganic impurities have been added to the pharmacopoeia over the years. These include USP Chapter <730> Plasma Spectrochemistry, which gives laboratories the opportunity to use techniques such as inductively coupled plasma with either mass spectrometry or atomic emission spectroscopy (ICP-MS, ICP-AES).

The advantage of ICP-MS and ICP-AES is that they both provide specific detection and quantification for individual elements (see table). The subjectivity of the semi-quantitative comparison that is required by the compendial methods is eliminated with ICP. The ICP techniques are quicker in most cases, and they also require a smaller sample size and give a better detection limit for all the elements of interest. The sample preparation method for ICP, for example, is also less likely to lead to the loss of the volatile elements.

ICP-AES is also sometimes referred to as ICP-OES (optical emission spectrometry). In this technique the sample solution is fed into an argon plasma which has a temperature of approximately 10,000°C. Under these conditions the sample matrix is destroyed and individual atoms are released. These atoms are then excited to a higher energy state. As the excited atoms cool they return to a ‘ground state’ releasing energy in the form of light, the wavelength of which is specific to a particular element. When this light falls on a detector it can be quantified and the amount of analyte evaluated.

ICP-MS is the second procedure specified in Chapter <223>. This technique also uses a plasma, but here the plasma is used to ionise the metal atoms, which are then fed into a quadrapole that separates the ions according to their mass to charge ratio. Following separation the ions fall onto a detector and the sample can be quantified.

Both ICP-AES and ICP-MS techniques are able to analyse several elements simultaneously, hence sample throughput can be very quick, typically 2–3 minutes per sample. The key difference between the instruments is the detection limit. The ICP-MS typically has detection limits 100–10,000 times lower than that of ICP-AES. Both techniques are capable of analysing to the levels required by the USP, but ICP-MS does give a much lower detection limit. 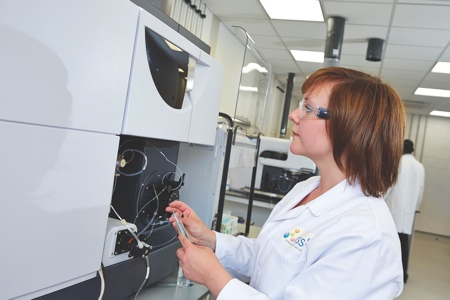 Sample about to undergo ICP-AES

Other techniques can also be used for analysis of elemental impurities, but each must be validated to ensure that it is suitable and able to detect the analytes at the required level. These methods include flame atomic absorption spectrometry (FAAS), which is a simple and relatively cheap technique with relatively high detection limits. However, it can analyse only one element at a time so is relatively slow.

Vapour generation atomic absorption spectrometry (VG-AAS) uses a chemical reaction to release metals in the form of gaseous hydrides. It has better detection limits than FAAS but can be used only for arsenic, bismuth, germanium, lead, antimony, selenium, tin and tellurium.

Graphite furnace atomic absorption spectrometry (GFAAS) has very good sensitivity, with detection limits similar to those achieved by ICP-AES. However, it is prone to chemical interferences affecting the results and the analysis is slow and can be costly.

In conclusion, of the 4,000 plus monographs in the USP/NF, there are almost 1,000 that specify a limit of heavy metals, in either a drug substance, excipient or drug product.3 It is no surprise, then, that it has taken some time for the revision of Chapter <231> to even get to this stage. However, implementation of Chapters <232> and <233> is now, arguably, overdue.

That said, the delay gives the industry a breathing space in which to validate the methods of the new Chapters for specific products. Manufacturers would be well advised to carry out this validation work now, knowing that Chapters <232> and <233> are imminent, and also necessary. The superior detection limits and specificity of modern techniques are needed to ensure that limits are not being exceeded and that patients are better protected from the risk of contamination. An update has been provided by the USP, which can be accessed at: www.usp.org/sites/default/ files/usp_pdf/EN/USPNF/key-issues/2013-10-18_update_on_232_and_233.pdf.

3. Presentation by Darrell R. Abernethy, MD, Ph.D. Associate Director for Drug Safety in the Office of Clinical Pharmacology at the FDA.