Monmouth Scientific has used its newly developed and launched Circulaire Powder Containment Cabinet as the ideal solution for weighing the powders used in the process, some of which carry a significantly high health risk. 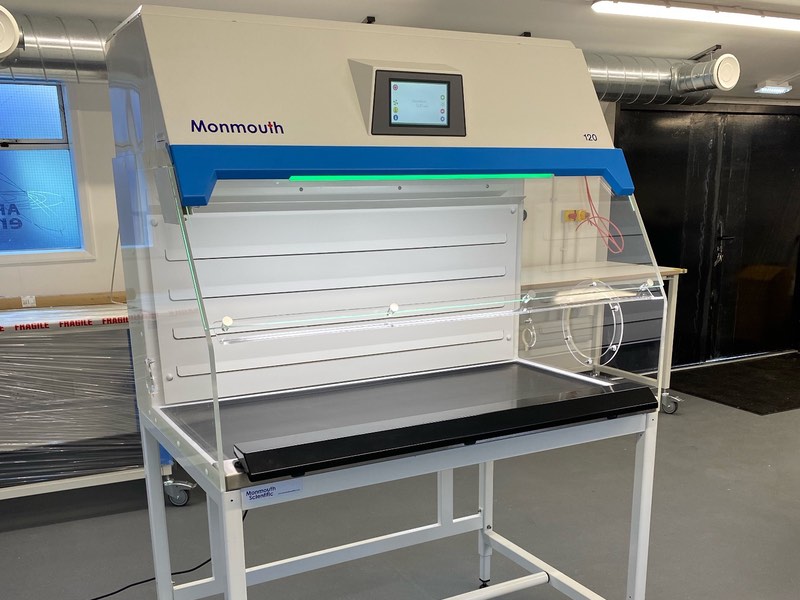 Clean air solution manufacturer, Monmouth Scientific, is supporting a UK Alkaline fuel cell manufacturer with a solution to guarantee a highly clean environment within which the team can carry out procedures vital to the production of complex fuel cells.

Monmouth Scientific’s experienced team identified the newly developed and launched Circulaire Powder Containment Cabinet as the ideal solution to meet the requirements of the client, who would be weighing the powders used in the process of producing the fuel cells, some of which carry a significantly high health risk. The powders will be transferred from a bulk container into small ones at precise weights, using a Micro Balance within the cabinet.

The UK-based firm’s alkaline fuel cell technology, previously used on mission-critical applications by NASA aboard the Space Shuttle, works by the electrochemical combination of hydrogen and oxygen in a non-combustion process. In doing so it produces electricity, heat, and water. Electrical generation is continuous as fuel cells are provided with a continuous source of hydrogen and oxygen (from air) to sustain the fuel cell reaction.

The Circulaire Powder Containment Cabinet, installed and commissioned by our team of experienced engineers, is designed to contain powders while using balances. Operating personnel and the surrounding environment are protected effectively against contamination of toxic substances.

The project’s Senior Materials Engineer said: “The cabinet will allow us to centralise powder weighing and allow us to do it safely in an easily controlled space. We’ve been pleased with the response from Monmouth and look forward to using the cabinet in the future.”

Fitted with a high-efficiency H14 HEPA filter, the low-velocity inward flow of air into the cabinet protects the operator without disturbing the powder during handling, ensuring reliable weighing results with proven safety.

Airflow is guided towards the interior to prevent released particles and aerosols from leaving the controlled working area. This guarantees personal protection. The two consecutive HEPA H14 filters retain the particles effectively at the source. The optimised airflow design ensures the highest possible level of safety.