Building the UK’s largest cleanroom on a live, high care site for a global manufacturer and supplier of drug delivery devices was no small feat. Paul Morley, Operations Director, and Lizzie Stratton, Contracts Manager at Chalcroft, explain how it was delivered

Chalcroft faced a considerable challenge when constructing a new cleanroom on a live, confined, high care site for Bespak Europe, a global leader in the manufacture and supply of drug delivery devices. Additionally, this was not just any new cleanroom – at 5,180m2, it was set to become the UK’s largest.

All certified cleanrooms need to be validated by an independent external party against ISO 14644-1 (the international standard for Airborne Particulate Cleanliness Classes in Cleanrooms and Clean Zones). As a consequence, validation must be considered at all stages of the design and build process, particularly when it comes to ‘future-proofing’ or allowing for further development.

Operations Director Paul Morley explains: ‘Bespak required a cleanroom with the flexibility to accommodate future increases in production. At present, the amount of machinery installed represents around a third of total capacity to provide scope for expansion, but this then poses a challenge in terms of specifying the correct air management units that could cope with current and future demand.

‘As the amount of machinery changes, so too do the operating conditions — increased heat and humidity will be generated and the air flow will be altered, so the HVAC system selected must be sufficiently flexible to adapt.’

Air flow around the cleanroom is a vital aspect of its safe management, preventing the escape of the raw material that could have a negative impact on assembly further down the line.

The specification for Bespak’s air handling system included the ability to supply a room volume of 18,900m3. The chosen system supplies clean air a rate of 63m3/sec through textile socks and this is collected through return ductwork legs inside dedicated plenums on either side of the main cleanroom. The HVAC system also included ISO 14644-1 compliant air conditioning and heat recovery ventilation units, as well as a new adiabatic cooler for the supply of chilled water, configured to eliminate any requirement for glycol in the cleanroom.

Workflow as well as airflow is a key consideration in cleanroom construction. Bespak’s process involves the delivery of raw plastic modules that are blown directly into moulds, before moving into pressing, component assembly, printing and finally packaging. Air flow around the cleanroom is therefore a vital aspect of its safe management, preventing the escape of the raw material that could have a negative impact on assembly further down the line.

Other cleanrooms may also have to carefully consider drainage to ensure used water and any associated waste flow in the correct direction – i.e. from high care to lower care areas and not vice versa. Air lock doors and sealing solutions must also be correctly specified to prevent the passage of contaminants and airborne particles from low care areas, such as offices and warehouse space, into the cleanroom.

To satisfy ISO 14644-1, many interior fixtures and fittings, such as the power and water supply, sprinklers, compressed air and other utilities, are determined by the specification. However, design and build partners and pharmaceutical companies can exercise a certain amount of control over the choice of finishes. ‘Many design decisions were made with both hygiene and simplicity in mind with this build,’ says Contracts Manager Lizzie Stratton. ‘Windows, for example, pose a potential risk of air and water ingress, and so Bespak’s cleanroom contains just one internal window.

‘Naturally, doors are essential and when specifying and installing them a number of factors are taken into consideration — from the direction in which they’re hung to be compatible with the interior air flow, to the speed of operation.’ 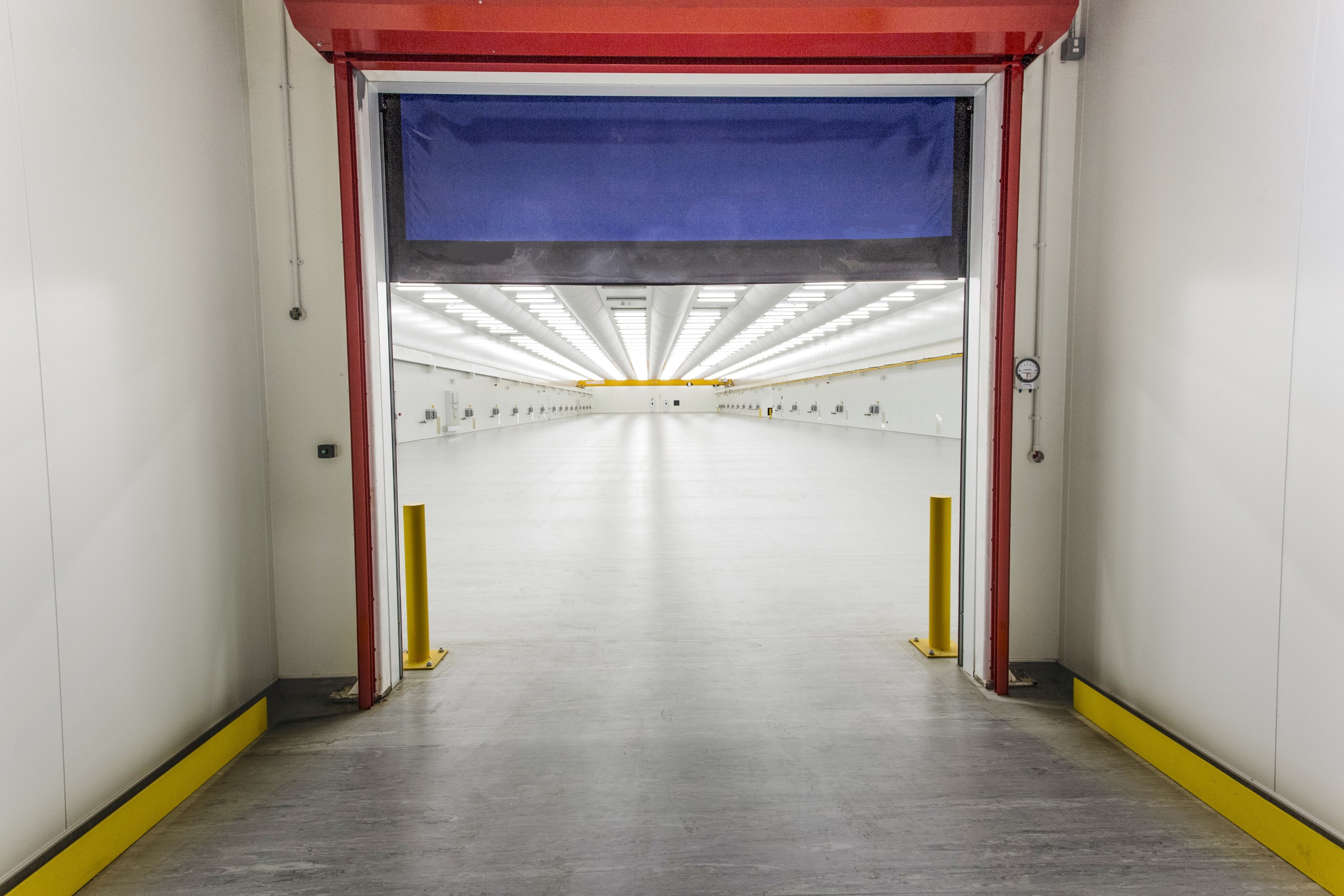 Rapid-rise doors, forming the barrier between the cleanroom and adjacent low care workspaces, protect the cleanroom from draughts and ingress of dust or dirt particles. ‘A faster-acting door prevents significant changes to humidity, temperature or air pressure, helping to maintain a constant environment within the cleanroom, while the speed of operation actually helps to save energy. The doors that we selected offer a superior leak-tightness and can also be operated by manual crank in case of an emergency,’ adds Stratton.

Fire protection is another important consideration as with any structure, and while they do not have to comply with the ISO cleanroom standard, products specified for external access must adhere to standard building regulations. The shutters selected for Bespak’s loading bays offer a minimum of one hour’s fire resistance, which for a facility of this size, allows ample time for individuals on-site to exit safely. Finally, personnel doors were supplied by a specialist in the supply of doors to controlled, hygienic environments. The doors are also fireproof and designed for acoustic control.

Cleanroom walls and ceilings are typically specified of the same material for ease of joining and for safe washdown: using the same finish throughout means the same chemical concentrations can be used to clean both; this is especially important when cleaning the junction between ceiling and wall, and means the same water pressure can be used throughout.

Originally designed for food and drink manufacturing environments, the wall panels possess all the hygiene characteristics required for a pharmaceutical facility, including resistance to bacterial growth

Wall panels are made to order to suit the dimensions and door positioning of an individual cleanroom, and are also designed for use with temperature-controlled systems. Additionally, they are insulated and feature a unique, crenellated tongue-and-groove joint system for superior thermal and structural performance. Originally designed for food and drink manufacturing environments, they possess all the hygiene characteristics required for a pharmaceutical facility, including resistance to bacterial growth.

Cleanroom flooring is no less important in achieving a hygienic finish. For lab environments, an ergonomic finish for employees working on foot is typically preferred, but what must also be taken into consideration is the weight of the machinery and its running characteristics, and also whether forklifts or any other moving equipment is utilised.

Morley says: ‘For Bespak, employees rarely work on foot for extended periods so the key criteria were the resilience of the flooring and its ability to withstand the additional machinery that will one day be installed. We selected polyurethane ‘marbleised’ vinyl flooring, which is commonly specified for hospitals and laboratories, meaning it fulfils the hygiene classification required as well as providing a pleasing aesthetic.’ With a specially formulated polyurethane surface treatment, it also resists the spread of fire, offers enhanced slip resistance and guarantees a long life under heavy traffic. 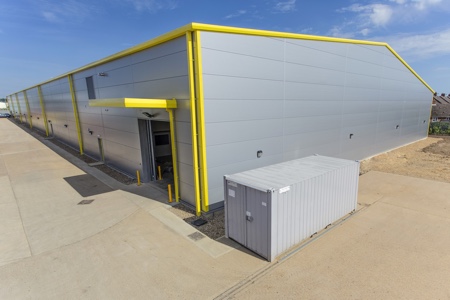 In the early stages of construction, the process of building a cleanroom is much the same as for a low care facility as the external building envelope differs little. A cleanroom can be thought of as a panelled, hygienic ‘box’ inside a traditional building, so when the interior fit-out and commissioning phase begins, the expertise of an experienced cleanroom construction company is vital.

Stratton explains: ‘As soon as the interior finishes have been installed and prior to commissioning, we have to treat the site as if it were already an operational cleanroom. That means everyone and everything that enters the facility must be cleaned to cleanroom standards to ensure that hygiene, particularly in terms of the air movement unit, is not compromised. Any particulates that are accidentally allowed to enter an air duct or vent at this stage could mean the cleanroom can’t be validated. We take every precaution to achieve first-time certification.’

However, extra caution was needed throughout the Bespak project as, rather than being a self-contained new build site, the cleanroom was situated adjacent to other high care production facilities, with Chalcroft and other contractors sharing access roads with delivery vehicles.

Morley believes communication is key to safe and successful live-site working: ‘First we must understand the customer’s ongoing operations – delivery schedules, changing shifts and movement around site. Next we consider segregation between this and our own workflow to mitigate the impact of our presence in terms of traffic, dust and vibration. Our aim is to be there, without the customer noticing we’re there.’

Following the completion of the Bespak project, which has since been confirmed by independent specialist, GMP Validation Consultants, as the largest cleanroom in the UK, Chalcroft has been awarded an additional contract to allow a further 640m2 expansion of Bespak’s operations, including an enlarged cleanroom, associated pass through air lock, and metrology facility. Here, operations will take on a new dimension as the new cleanroom will be an extension to a working high care facility.

When you’re working within a live site rather than adjacent to it, a small level of disruption is inevitable, but the earlier you can plan for it, the easier the process will be

This means temporary segregation is already under consideration. As Stratton explains: ‘When you’re working within a live site rather than adjacent to it, a small level of disruption is inevitable, but the earlier you can plan for it, the easier the process will be. Polythene screens and wrap materials for fixed assets such as machinery need to be in place well ahead of the doors being opened, while equipment passing through a live site must also be wrapped in transit. Most important is personal preparation: wearing the correct protective clothing, changing in the appropriate manner, and of course covering hair and shoes.’

Morley concludes: ‘In selecting a design and build partner for a cleanroom or pharmaceutical manufacturing project, a proven track record must be the number one criterion. Our collaborative approach to live-site working means that business-critical operations are unaffected, and customers can be confident of cleanroom validation. The greatest form of customer testimonial one can receive is additional contracts, and to be working on a third project with Bespak points to a highly successful partnership.’